You are here: Home / ENTERTAINMENT / Take Me Home, Country Roads: A Theatre Review

Near Broadway perfection is occurring 8 times a week at the Stephen Sondheim Theater with the latest revival of Horton Foote’s 1953 classic play, “The Trip to Bountiful”.  Set in 1950s Texas, this poignant piece tells the story of Mrs. Carrie Watts, an aging widow whose only wish is to visit her childhood country home one last time. Barring her request stands her overprotective son, Ludie, and his all too cosmopolitan wife, Jessie Mae, with whom Carrie shares an apartment in Houston.   Carrie is played with such exquisite elegance and “chutzpah” by the remarkable Cicely Tyson that there is no question why Tony voters awarded her with the leading lady prize this year.  Tyson breathes incredible zest into this faithful yet complex Christian lady who ultimately seeks the serenity she once had at her former homestead.  Once bound by the confines of her daughter-in-law who forbids hymn singing, Carrie ultimately becomes free to sing her favorite church songs whenever she pleases. At one point in the show, her  versions of “Blessed Assurance” and “Softly and Tenderly “ are met with an audience sing-along (normally something I would loathe in any live theater performance, but surprisingly found moving and sweet this time around.)

Vanessa Williams shines as Jessie Mae, whose constant irritations in life are driven by the mere presence of her mother-in-law.   Adepero Oduye  makes an impressive Broadway debut as Thelma, a sweet young lady who shares her personal story and a gentle kindness with Carrie during her trek.  A usually likeable Cuba Gooding, Jr. also makes his Broadway debut as Ludie Watts. Unfortunately, his performance is  not to the caliber of his peers. Gooding’s  acting choices are often unclear and inconsistent.

On  the  hyper-spectacled Great White way, it is refreshing to see a play whose primary focus is on character development and heart-felt story telling.  At the performance I attended, the audience leapt to their feets with applause and affirmation at the curtain call—proof that patrons will support  quality and excellence.   With summer vacations now upon us, plan a stay-cation and take a  “trip” to the Stephen Sondheim Theatre on W. 43rd st.  Your heart and mind will thank you. 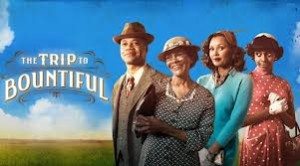