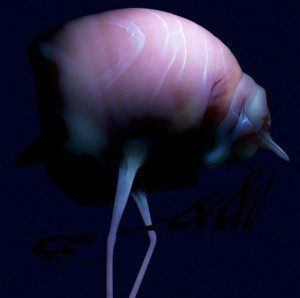 Great producers are not uncommon in today’s electronic music scene, but as I see it, there are very few that one could actually call “inspiring”; like how J Dilla’s nearly posthumous Donuts led to a slew of L.A. Hip-hop based producers going down a more experimental and sample based approach. More often than not, when something is deemed “new” — like every Tri-Angle release most surely will be — it is more often “new” in the way that it contains modern sound design and software enabled sleekness rather than “new” in the sense that it contains original ideas and aesthetics. It can seem at times like there is little discovery left to be had in terms of musical inventiveness, as almost everything can be sorted into its own micro-genre with relative ease. This is the reason why there is so much clutter in the field of experimentalism lately, as it is where artists seek refuge and take pride in saying “fuck you!” to the norms. However, the most promising producers might be the ones who can pull off being incomparably abstract yet catchy at the same time. It is these producers that are guaranteed to have successful careers.

Brooklyn based/Venezuelan born producer Alejandro Ghersi, who records as Arca, happens to have more than a few tricks up his sleeves, and despite the fact that he has yet to release a full-length worth of material, he is already proving that he is a one of a kind producer. Quite simply, Arca’s music sounds post-everything (post-internet?), and is futuristic in a not such an easily describable way. Adjectives I have came up with so far are kaleidoscopic, celestial, frigid, and tropical (Clearly, I haven’t done a very good job), but he is also clearly infatuated with hip-hop — at least the distorted kind — and the samples he uses manage to give the music its accessibility. It somehow isn’t as weird as label mates Dean Blunt or James Ferraro, although it’s just as experimentally based if not more so. Needless to say, even when his music fills us with so much intrigue, he’s not the easiest artist to write about

As you might imagine, Arca is quite the enigmatic figure. Even after the release of his critically acclaimed Stretch 2 EP, it was quite surprising to see Arca listed with 4 production credits on Yeezus seeing how so little is known of him. Kanye — or whoever may have sought him out — obviously saw that his productions were surgically precise and meticulously detailed yet raw and obviously supportive of a DIY mentality; this is how I can see him being potentially inspiring for future producers. Just listen to the way he loops vocals on “Fossil”, or the shape shifting piano chords on “Century”, or the way he can sound chaotic and adventurous while still maintaining tightly controlled underneath; it’s all you need to hear to take notice of his exceptionality.

&&&&& is a free 25 minute mixtape by Arca released on Hippos in Tanks. There are 14 tracks each running around 2 minutes, but I recommend that you don’t look at the song titles and let it all flow over you as one continuous piece; like the way it’s presented on the artist’s soundcloud page. It’s by far his most mind altering statement to date, and like the gif’s of the cover art being played on a loop on his webpage ( http://www.arca1000000.com/ ), it can also be rather frightening. If there was a social setting you would be allowed to play this mix in, it would be at 5 in the morning after a party when everyone is already dazed and bent out of their minds. If the drug culture gets a hold of this mix — and they surely will — it would be used in unison with the most intense psychotropics (DMT for example), both because it seems to open a portal to a different world as well as its short running time (DMT only lasts about 25 minutes).

The tracks are diverse, and they are based around an incredibly unique sound palette that turns their influences on their heads. Take opener “Knot” for example, which takes a hyper melodic kosmiche inspired keyboard pattern to verifiable extremes of frequencies. He turns ugly, dated sounds and makes them interesting again — like the ancient hip-hop beats and ambient textures that pervade the mix. Even at the most high pitched moments, it sounds majestic instead of noisy, and we never once feel like Arca doesn’t know what he’s doing.

There are moments on &&&&& where a musical style is at play that I really feel hasn’t been explored before. Better yet, it doesn’t feel like a fluke either. The 14 tracks here express a smorgasbord of intriguing musical developments and is essential for anyone even slightly interested in experimental music. It may only be a mixtape — and a brief one at that — but it just may happen to rival the best full lengths of the year.