You are here: Home / ENTERTAINMENT / Blue Jasmine: Guess Who’s Back? 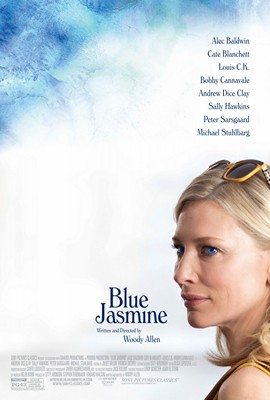 Woody Allen, at 77, has been one of the most consistent, lauded and  influential American artists of the last 50 years (which also happens to be the amount of time that he’s been an active filmmaker). The Brooklynite basically birthed a brand new era of Jewish humor in his career beginnings with slap-sticky pictures like What’s New Pussy Cat and Bananas, and then went on to make more dense and existential dramadies such as Annie Hall (which is one of the few comedies to win the Academy Award for best picture), and has since continued to output new films at an almost annual basis. It’s a body of work so immense and lengthy that it could cause even his most ardent fans to ponder if there is really anything left for the director to do in his old age, and if he might have even have run out of things to say. A few years ago, this certainly appeared to be the case, as Allen’s films seemed to be stuck in a rut of mediocrity, with some people even calling his technique “dated”. Then, in 2011, a rather great surprise happened when Woody Allen released Midnight in Paris, which not only proved to be a critical favorite, but that $17 million picture happened to make a box office gross of $151,119,219 which easily made it Woody Allen’s most lucrative touchstone to date. Now, two years (and the forgettable To Rome With Love) later, Woody Allen has released another picture that is not just a latter day standout for him, but it’s a telling reminder of how important Woody Allen has really been for American film these last few decades.

Blue Jasmine is a film that Woody Allen has not made any bones about it being directly inspired by Tennessee Williams’  play A Streetcar Named Desire. The film begins with it’s central character, Jasmine (Cate Blanchett), arriving in San Francisco after her life comes crumbling down around her. Her wealthy husband (Alec Baldwin) had committed suicide after being arrested for a huge Bernie Madoff-esque scandal, and now Jasmine has lost all her assets and become hopelessly distraught and reliant on xanex. Traveling to the west coast so that she may live with her sister Ginger (Sally Hawkins), who lives a lower-middle-class lifestyle, Jasmine only finds more troubling areas for her in this new set-up. The film then proceeds to show us how Jasmine adjusts to her new living conditions, while interspersed with flashback segments that show us how the character got into her current predicament

The film is very much an exercise in melodrama, but it’s done in a fashion that’s both delicious and effective. There is plenty of Woody Allen’s humor throughout the film (seen most ostensibly through Jasmine ditsy moments), but when the more harrowing moments occur they tend to pack a wallop. When we witness characters fight or have intense breakdowns, it’s easy to find it reminiscent of watching a great stage play such as Death of a Salesman, although a lot of that sensation might come from the film’s retro feel. Although set in the modern day, it often appears that Blue Jasmine could have took place in the 70s or 80s, from the look of the film’s decorum. It’s hard to tell whether the film’s characters dress in slightly dated attire on purpose or not, but it certainly reflects the sensibilities of the aging director, even at the odd moment when a cell phone or mac computer shows up. 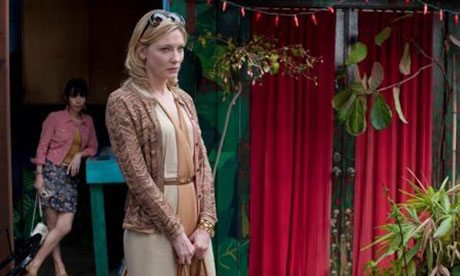 As mentioned earlier, the film has a non-linear style to it, that actually is a bit reminiscent of the complex plotting that Woody Allen used in films such as Hannah and Her Sisters and Crimes and Misdemeanors. The film is rather clever with it’s story, and it manages to place quite a few elephants in our head while watching it. It doesn’t always work though. There’s a seemingly abandoned sub-plot that involves Jasmine being sexually harassed by her employer that comes off as unnecessary, and the film gets a bit predictable in some areas once audiences start to latch on to why Woody Allen is showing us certain scenarios. Still, the pay-off more than makes up for it, and the ending is one of the most harrowing and unexpected that Woody Allen has ever shot. Some will call it a downer for sure, but many others will find it perfectly in tune with the director’s existential leanings.

Already much press has been dedicated to Cate Blanchett’s performance. The actress really carries Jasmine with the right degree of humanity, along with aloofness that could only exist in a character of Woody Allen’s creation. The rest of the cast is excellent though as well, with many of them displaying their range in both the comedic and the dramatic. Alec Baldwin is so sinister and forward in his role that it will make you forget about all the times you laughed to him at 30 Rock, Sally Hawkins acts as the intriguing (stereotypical) class-opposite too Jasmine, and Bobby Cannavale (fresh off his scene-stealing turn on season 3 of Boardwalk Empire) shows once again that he knows how to play tough and hot-headed Italian men. One of the film’s best curios, however, is in the casting of comedian Louis C.K., as his sit-com Louie has pervasively been compared to Woody Allen’s work, and he has also worked with Susan E. Morse, a frequent editor of Allen’s films. C.K’s role in the film is limited yet fully likable, and Allen has expressed that he’d like to work with him again in the future.

It’s not a masterpiece, nor is it exactly a crowd pleaser, but it is a more than solid film from a veteran director that does a fine job of addressing most of the cues that has made his body of work such a driving factor towards suggesting that there is still much artisitic merit to be found in American cinema(similar to John Cassavetes). While certainly a relevant film for our time regarding it’s commentary on the economic recession, Blue Jasmine works best when one views it as an homage to the past, and a latter-day standout from one of the most fascinating careers since the birth of the New Hollywood era. 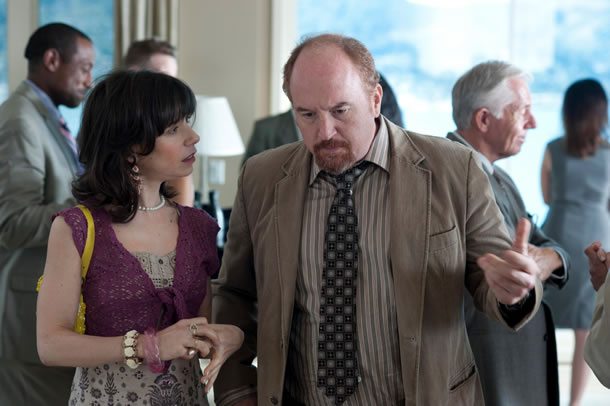