Well, some of you might recall from an earlier edition of my Netflix’d column that I had intended to write a review off of Peep Show. Sadly, I discovered that that wonderful series was no longer streaming, so I put it on hold. Six months later, however, the Netflix gods have done right again and placed Peep Show back onto Netflix’s streaming queue, along with the addition of it’s recently aired 8th season. Ah, the sense for having a second chance is truly a resounding one. 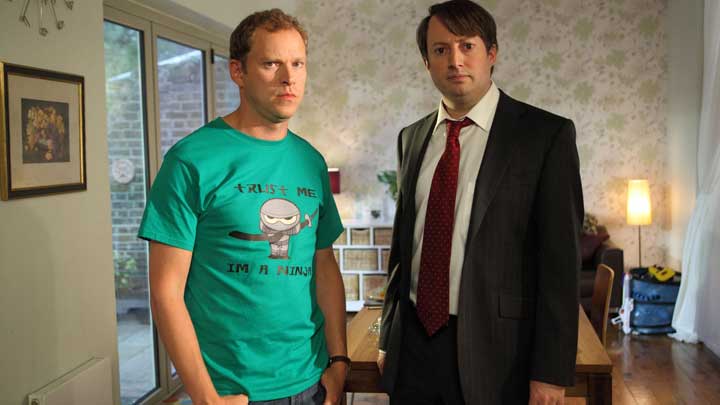 As an entertainment critic, perfection certainly isn’t a word I like to throw around lightly, especially when it comes to talking about sit-coms. Even in our current day-and-age with many reviews already calling it the golden age of television, people can attest that so much studio-approved drek comes out in the form of sit-coms this day, be it Whitney or Who Gives a Fuck About Any of This Shit? Us Writers Aren’t Even Trying (one of those two shows doesn’t actually exist). That said, Peep Show certainly comes closer than most to being the perfect sit-com, as it really reads like a laundry list for ingredients needed to make a great half-hour of comedy. It’s got a sly yet irreverent sense of humor, a consistent tone and laugh rate, highly fleshed out characters, killer scripts, a novel film-making style, and it just goes on and on (also the show lacks a laugh track). If it’s not a perfect comedy, then I will just say this: it’s the best long-running live-action comedy show since Seinfeld.

Set in London, the show focuses on two misanthropic flat-mates that are as flawed as they are lovable. David Mitchell stars as Mark Corrigan, a man who has had plenty of success throughout his career, yet he is simply hopeless when it comes to the opposite sex due to his neurotic nature and lack of self-confidence. His flatmate and old college buddy Jeremy Usborne (Robert Webb), on the other hand, is steadily unemployed yet almost always successful with women. Certainly appearing to be the more well-adjusted of the two, Jeremy has plenty of insecurities of his own, and is often overtly selfish, and a failure at obtaining his life goal of becoming a successful musician. Throughout the series we see these two character develop (perhaps not enough though), as they deal with numerous real-life conundrums such as love, career, family and friendship.

For those of you that have just read the synopsis and are flabbergasted as to why a show would be named Peep Show if it isn’t based around porn shops, well then read on. The show gets its title due to its singular filmmaking style: Virtually every shot in the show is a point-of-view shot from one of it’s characters. We see these characters observe people and the world around them, with the camera even acknowledging it when they bring things to their mouth (I.E. drinking, eating, kissing, etc.). It’s a style that could have grown gimmicky and tiresome after a while, but instead it feels completely organic, and the best part is that it really lets us get inside Mark and Jeremy’s heads. Through voice overs, we hear the thoughts of these two complexly flawed main characters, and it’s a tactic that was borrowed from Woody Allen’s Annie Hall, during the highly memorable scene when subtitles revealed the true thoughts of the characters. Still, it feels really original here in Peep Show, and feels completely in tune with its style. 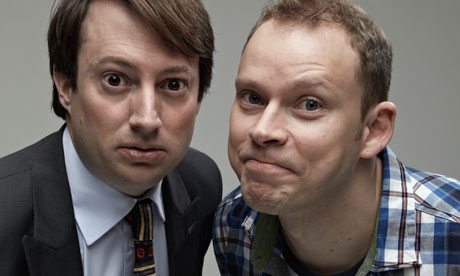 As novel as the show’s look is, however, it’s the writing that really makes it so utterly fantastic. While certainly British, the show is actually more American-friendly than most of it’s peers as it frequently references American movies, television shows, and even politics (this past season referenced both Bernie Madoff and George W. Bush). What’s more though, is that the show’s writers are just so clever with coming up with episode ideas, and then nailing them down as efficiently as possible. From an episode where Mark ponders if things would be better if he and his boss were homosexual lovers, or Jeremy discovering that he’s really good at poker without even knowing the rules, the show constantly finds ways to subvert the viewer’s expectations. It’s an extremely literate show also, that will always follow up a dick joke with a joke that name drops Emily Brontë, all while exploring issues of contemporary class standings regarding sex, well-being, and psychology. Whether you value the highly sophisticated comedy of Rickey Gervais, or if you’re more drawn to the wacky and irreverent humor of a show like The Simpsons, Peep Show is exactly the type of show to keep you in stitches, and it doesn’t slow down at all. Throughout all it’s 8 (albeit brief) seasons, the show remains fresh and hilarious, and yes re-watchings do reveal even more great jokes.

Rounding it all out, Peep Show has the sort of exceptional cast that you almost never see on American television (I.E. Most of the characters aren’t extraordinarily super good looking). David Mitchell and Robert Webb are fairly recognizable in their home country due to their work on sketch comedy shows, but it’s arguably Peep Show that really shows how intrinsic they are as a comedy duo. Mitchell and Webb feel so in tune with Mark and Jeremey and their Odd Couple-esque relationship that it’s hard to believe that Mitchell and Webb aren’t the primary writers for the show (although they do contribute material).

The secondary cast is fantastic too, with special props going to Matt King’s performance as Super Hans, Jeremy’s drug-abusive band mate. In a way, Super Hans acts as the show’s answer to Family Guy’s Quagmire, as he’s a despicable and decadent man, yet his repulsive behavior is almost always spot-on hilarious, and he’s pretty much an ideal example of a corrupt yet highly watchable character. On the more conventionally affable side, however, in season 5 a new love interest is introduced for Mark in the form of a young woman named Dobby. Played by musician/writer Isy Suttie, the character is simply endearing to watch, with her cute demeanor and winning personality, and she strikes me as the best character addition to a sitcom since Danny DeVito in It’s Always Sunny in Philadelphia. Trust me, it’s hard not to develop a celebrity crush on Suttie after watching this show.

Since it’s inception, there have been at least two attempts at making Americanized versions of Peep Show but neither of which have made it past a pilot. In all honesty, I find this to be a relief, as it’s hard to imagine any American channel (even HBO) making a show that feels anywhere near as outstanding as this British original. At eight seasons, Peep Show also proves to be an anomaly amidst some of its Brit-TV peers like The Inbetweeners, Spaced and The Office with none of those series making it even past a third season. Peep Show’s creators really have had a great and fruitful time with making use of the show’s brilliant format and style, and should be proud that they’ve made what could quite possibly be called the most satisfying and all encompassing show to ever air on British television. I started doing this column as I felt a lot of people had Netflix accounts and didn’t know what to watch. While the various movies and tv shows I’ve previously touched on all range from great to excellent, I feel that Peep Show is something special above the whole lot of em’, and it’s pretty much the single best reason to own a Netflix account. Now finish this last sentence, and go watch it immediately! 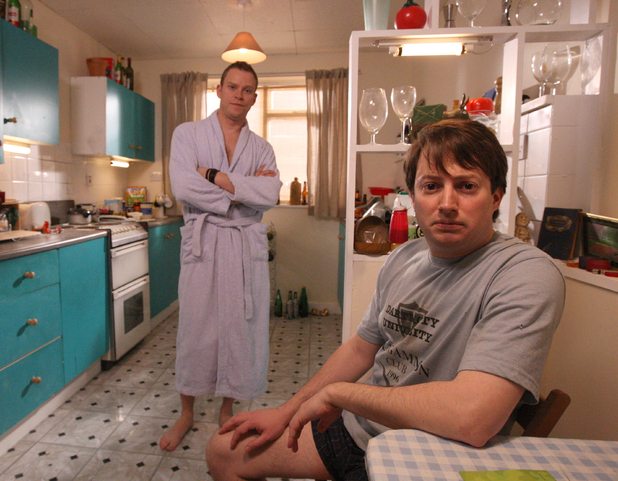