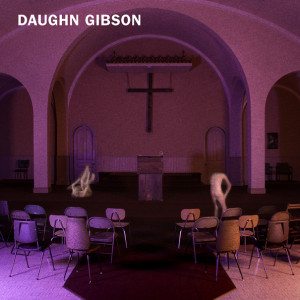 There aren’t many similarities between country and electronica, so when Daughn Gibson attempted to link the two on his debut, the results were surprisingly glorious. All Hell may not have been a perfect record — “Lookin Back to 99” was a particularly bland homage to late 80’s goth rock — but as a whole, the record represented a very forward looking vision of genre melding. The music proved to be appealing to electronica fans who weren’t into country and vice-versa. Tracks like “In the Beginning”, and “Ray”, managed to encapsulate the evocative yearning of country songs while incorporating a sense of majestic whimsy through use of gorgeous sampling. It was a very promising debut to say the least, and we were all curious to see where his sound would go next.

On his second album, Me Moan, Daughn takes the style he developed on All Hell in broader, full band oriented directions. Where his songs previously mystified and enveloped our senses, here he seems much more content with writing good rock songs. For the most part, these 13 tracks  are “good” rock songs, but much of the elusiveness from his debut has been lost. While sampling is still used quite frequently, it’s quite clear the songs themselves weren’t based around the samples, and there isn’t one song where the acoustic and electronic components are linked as intricately as they were on All Hell standout “Tiffany Lou”. Despite the record being strong in other areas — there are some spectacular high points — this departure is disappointing, as he really did sound like no one else on his home-strung debut. To be fair, there aren’t too many artists that sound like him now either — this is still far from your every-man’s country album — but it’s a much more produced, song oriented and accessible affair then what most of us were probably expecting, and surely not the “sequel” most of us were hoping for.

What has stayed the same is Daughn’s alluringly handsome voice, which if anything, sounds even deeper here than it had been before. It turns out to be a limited instrument though, and since the sampling of more ethereal female voices are few and far between, there is very little to break up its monotony. This problem could have been alleviated with guest vocalists, but unfortunately any vocalists other than Daughn are merely assigned to backing duties. While the instrumentation itself is varied (I’ll talk more about this later), Daughn feels very comfortable endlessly singing in his melancholic baritone with only slight variation. By the end of the album, you’ll be dying to make a joke about its campiness. Some spoken word poetry or even a curdling scream every once in a while would have been greatly appreciated.

The album’s saving grace happens to be the instrumentation and songwriting — which are varied and unique, and capable of picking up the pieces when the aforementioned components of the music are dragging in the mud. Members of Baroness and Brokeback are labeled with production credits, and the whole thing sounds quite well put together and glossy. Despite all my previous gripes with monotony, the track sequencing does happen to emit a nice flow, and the first half of the album in particular has some enthralling and excellently composed music on it. The songs are perhaps the best when they conjure up visions of a sprawling Americana (grassy knolls, rolling hills, windswept shorelines, ect.), but do so with an interesting twist. For instance, the leading instrument in “Mad Ocean” is a bagpipe, but it happens to approach a timbre that is so vibrant it seems to transcend our previous connotations of the instrument.

The experience ends up feeling uneven as a complete statement. Daughn Gibson is a true talent — both as a songwriter and a storyteller — but there is something missing from Me Moan in terms of a larger scope. His SubPop debut was inevitably going to be more produced, but I can’t help but feel his music worked better when recorded in a more intimate and isolated setting. Hopefully, on his next release he’ll be able to combine the best of both worlds.

9.) Kissin On The Black Top