You are here: Home / ENTERTAINMENT / Owner’s Manual is Off Model 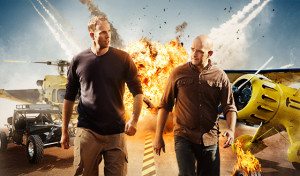 One of the more subtle underpinnings of TV’s unscripted genre has been the notion of life imitating art. This can come from many possible angles, including: blatant real life knockoffs of hit shows (Real Housewives in all of it’s forms), testing the plausibility of what happens in other media (Mythbusters just did a special devoted to Breaking Bad’s most plausibility-shattering moments), and the increasingly common tactic of finding a cliché or stereotype and running with it (Duck Dynasty feels like “blue collar reality”). It is from that third well that AMC debuts it’s newest show, Owner’s Manual.

Owner’s Manual operates on the age old observational comedy yarn about men being seemingly incapable of asking for directions on anything whether from a book or another person. The show puts this theory to the test by having it’s hosts Ed Sanders and Marcus Hunt try to operate some of the world’s most intricate machinery, with Marcus insisting on being “by-the-book” while Ed is more “on-the-fly”. Each week brings not only the challenge of book vs. instinct, but also forces the two to collaborate in order to complete the week’s challenge.

Our first episode involves our stars trying to learn how to operate a plane in a dogfight not too dissimilar from the Top Gun. In order to make it there, however, Ed and Marcus must perform some basic maneuvers and prove that they can handle gravitation. Marcus aces the first test as Ed passes out almost immediately when the plane goes into a tailspin. However, it’s Ed who seems more adept at feeling his way through loops and spins. The two do ultimately get to dogfight, but it’s Marcus who gets the upper hand solely for knowing the phrase “permission to engage”.

So how does Owner’s Manual play out? Well not as well as you think. While the show is built on book learning vs. gut feeling, but at the end of the day, most of the major learning comes from asking questions, making the distance between Marcus and Ed’s approaches not nearly as far as you’d think. This is made even less distinct when one considers that the second challenge often ends up requiring some sort of teamwork. The end result is a show that ends up showing the primacy of a hybrid approach to tackling any sort of project.

The show’s remedy for this is to have a never ending string of trash talk. Basically, unless something goes horribly wrong mid-challenge, the two only communicate through smack talk, which while entertaining, also ensures that we will never glean any deeper into this rivalry, making this the sort of show that makes you feel like once you’ve seen one episode, you’ve seen them all.

The Final Verdict: Owner’s Manual feels pretty middling. It’s inoffensive, but at the same time often blows it’s own internal logic to smithereens. It sets itself as a hardened rivalry, but ultimately leans on teamwork, co-ordination, and the expertise of others (which doesn’t particularly count for either of it’s supposed methodologies) in order to have successful teamwork. Furthermore, the show seems like the sort of enterprise in which a well constructed SNL sketch would probably capture the show well enough that you would never have to watch it to see what comes next. Skip this one, it’s pretty mediocre in what typically tends to be one of the hottest contested time slots on the dial.