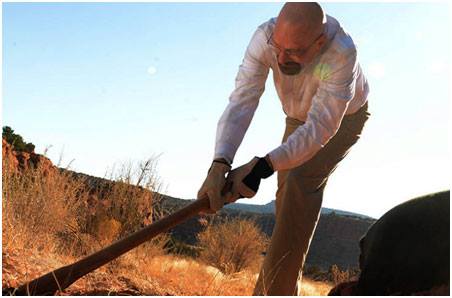 *This will spoil the episode for you*

Breaking Bad has always been the show to push television serials into a hyper and precise mode, and we’re seeing that in full spades for this season. Picking up moments after the last episode ended, we find Walt leaving Hank’s garage, getting into his van, and then trying to call Skyler. Walt finds that she can’t be reached then as her line is busy, and then in true fashion for the show, Walt discovers that Hank is the one calling her. The game is on between these two, and they both seem equally matched!

The scene with Hank and Skyler was truly great. Hank is finally catching on to why she has been so distraught, and tries to comfort her, but it’s also clear that he’s seeing her as the key that he needs to get Walt. The dialogue and acting here is fantastic, with Hank attempting to suade her in a very calming fashion. Still, Skyler ultimately refuses to help Hank knowing what it could do to her, and we already see that their families are going to suffer from this. When Marie confronts Skyler she grows very angry, slaps her, and almost kidnaps her infant daughter, and only stops when Hank asks her to put the child down. It was such good reasoning of the writers to do this as we know that Marie has had kleptomaniac tendencies before in the past, and she’s quick to put blame on whomever was responsible for shooting Hank.

Walt however, is certainly trying his best to cover all his bases. Walt has Saul’s men gather his money for him, and then he buries it in a remore location all by himself. As dark a character as we’ve seen Walt become, one does have to admire how far he’s come since the beginning, and that he is now very efficient at what he sets out to do. There were even moments that suggested that Walt really still has humanity to him, such as when he scolds Saul after he suggest murdering Hank, or when he tells Skyler that he is going to make sure the children receive all the money. Who knows if he’s being honest when he says his cancer is back (the flash forwards seem to suggest otherwise), but Walt does seem to be preparing for the end, and if Jesse is going to earn redemption this season, than perhaps it’s not out of the question that Walt will too.

Plus, it looks like Walt is going to have more to worry about than just Hank. Lydia has teamed up with the neo-nazis that incited the prison riot, and leads them to take out Declan’s drug operation. While I had initially assumed that the flash forwards were suggesting that Walt was planning an attack on a police precinct (maybe to save Skyler), now I’m beginning to wonder if Walt’s final adversary will be Todd and his Uncle, as both of these characters have proven they are beyond redemption at this point. Great character writing for Lydia as well, as when she tells Todd that she doesn’t want to see the dead bodies, he merely replies, “I guess you can close your eyes.” In many ways she’s just like Walt was at the start of this series.

Which now brings us to the ending scene. Jesse has been picked up after his money-throwing spree, and has once again exposed a potential wound for Walt.  At this point, I feel it’s safe to assume that next week’s episode is gonna begin with the Hank and Jesse confrontation we’ve been waiting for for some time…and it’s not gonna play out like any of us expected us to either!