Note: I just caught up on last week’s episode yesterday, which is why I didn’t post an entry for this column last week. Therefore, this post will serve as a review for not one, but two Breaking Bad episodes! 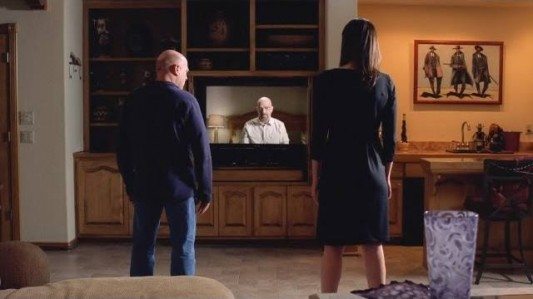 So here’s what I’ve been waiting for since the finale of the fourth season: Jesse uncovering that Walt really poisoned Brock. I knew it was inevitable, and once again the show’s writers have picked the absolute right time for this story point to come into play. Jesse has been catching on that Walt has become so casually dishonest, and even feels that Walt won’t hesitate to kill him if he feel he needs too. Well, we the viewer (and Hank) know that Jesse is one of the few characters that Walt is strongly against killing, but we also see that he wants to get this problem settled with extremely quickly. He has Saul arrange Jesse a meet up with a mysterious black market operator who specializes in giving clients new identities, but when Jesse is waiting for him he reaches for his weed stash only to find it missing. His frustration, anger, and this chance occurrence allows him to finally put two-and-two together: Saul’s guys stole that ricin cigarette from him, just as they stole the marijuana from him just now. Could you imagine how pissed he must feel right now?

Aside from Jesse though, Walt already has so much on his hands with Hank. Hank won’t back down, which forces Walt to do something pretty horrible yet again. He hands Hank a “confession” video that he and Skylar made, in which Walt claims that Hank is the man that’s brought him into the drug game. In true Breaking Bad form, Walt’s video brings up some factors from previous seasons that viewers may have initially seen as red herrings, such as the fact that Walt paid for Hank’s medical operation. It’s a rather chilling scene as both Dean Norris and Betsy Brant seem so natural in their husband-and-wife roles, that you just have your mind completely tune out the fact that they are actors. Walt’s video is a very valid threat, and Walt’s words are just as believable as Hank’s claims. 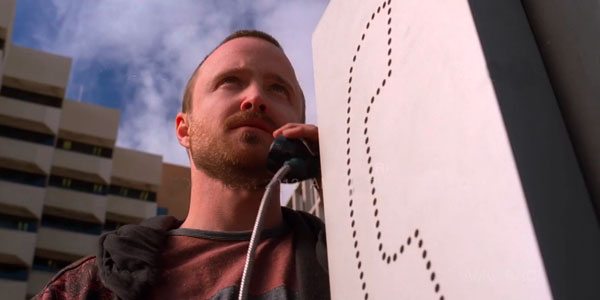 Thus, that finally brings us to the Hank-Jesse team up that I’ve been speculating on. Confessions ended with some rather intense cinematography of Jesse pouring gasoline throughout Walt’s house, but I predicted that he wouldn’t go through with actually burning the place as the flash forward shows that his house still stands. Still, it was so brilliant of Gilligan and his writers to decide that the follow-up episode,  Rabid Dog, should have its first half dedicated to Walt discovering his house was doused in gasoline, and then deciding to remove his family from it and commence a search for Jesse. We can see that Walt has no intention to kill Jesse…but that might all be changing now.

Yes, Hank does come and prevent Jesse from burning down the White residence, and takes Pinkman into his own home as a witness. Listening to Jesse’s cellphone messages, Hank discovers that Walt wants to meet with Jesse in a public place so that they can discuss things. Hank puts a wire on Jesse and asks him to meet up with Walt, but Hank also begins to show his dark side in this area. He plans to film it, and if Walt does indeed kill the “junkie murderer” then it’ll be exactly what he needs to take him in. It understandable that Hank would be breaking bad himself at this point, given the extreme circumstances this particular investigation must be having on his psyche. Marie already has confessed to have wicked thoughts, as she consults a psychologist and explains that she’s been contemplating poisoning someone   (I.E. Walt). There’s just so much tension, I’m thinking that at some point one of the two Schraders (if not both) is going to begin working outside the law to try and bring down Walt.

In my last post for this column I had said that we have come to see Walt as such an efficient criminal in recent episodes, but last night’s also showed us that he is in many ways still too clumsy for this profession. He tries to explain to his family that the gasoline spillage in their house comes from a freak accident at a gas station, but both Skylar and Walt Jr. see through his bullshit. When Walt finally does come clean to his wife that Jesse did indeed break into their house and attempt to burn it to the ground, Skylar says that he must deal with it immediately. Walt’s meeting with Jesse could have clearly been the end of everything, especially as he went there alone, but we can be thankful that the writers realize that Walt’s success rate is at least 30% luck. Jesse turns away when he suspects that Walt has brought a thug along to kill him, which infuriates Hank. Still though, Jesse’s payphone call to Walt suggests that he may want to intimidate him some more, and he may not be as much a coward as some people say he is.

Lastly though, I’d like to point out once again that the writers seem to be planning for something rather ominous to come from Todd and his Uncle Jack. It’s interesting that these two episodes are bookended with scenes involving them, starting out with a really unexpected cold opening in Confessions that finds the pair of them at a roadside diner. Here we seeing Todd describing the train heist job that they pulled off, and even though we the viewers have already seen it, it’s fascinating to hear it retold from this character’s perspective. Also, we can’t help but acknowledge that he left out the part about gunning down a child. We then go to a scene where we see Uncle Jack wiping blood off his boot and flushing the cloth down the toilet. It’s easy to read this as foreshadowing for bad things to come, but it’s just so deliciously shot for us to really complain about it being blatant. With Rabid Dog ending with a scene where Walt calls Todd saying he might have another “job” for his uncle, we know shit is only gonna get uglier now.

Half-way through now! Lets see how the other 50% goes.