You are here: Home / ENTERTAINMENT / The Room: 10 Years Later – A Look Back on Tommy Wisseau’s Master-Wreck of a Film

If you like movies as much as I do, then chances are you’ve heard that sentence a lot. I can’t tell you how many times I’ve played witness to somebody justifying their love for a shitty movie by claiming that it’s funny in how terrible it is. There certainly are films that I feel could be very much characterized by this term, but I for one have never really been a fan of it as so many movies could fall under this jurisdiction with the right amount of flexibility. You could tell me Rob Zombie’s movies are good if you just don’t pay attention to the plot, or that The Butterfly Effect is a great movie to make fun of, but in the end I feel all your doing is making a stupid piece of crap into a decent drinking game. As someone who prides cinema as an art form, and has grown more and more disinterested in B-movies with age, I just don’t have the time to watch a bad movie, no less one that is unbelievably bad. Not to sound pompous, but as a writer I feel obligated to tell people about great works of cinema that they might have missed, not terrible ones that are exactly like the other pieces of drek that they can see anywhere or anytime. I’m just gonna say it: WHO THE FUCK WANTS TO WATCH BAD FUCKING MOVIES!!!! 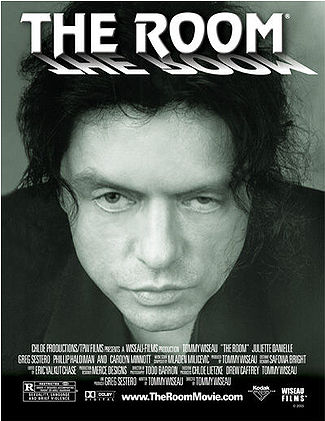 Tommy Wisseau’s 2003 film The Room, however, is in a completely different league.

For those unfamiliar with the film in question, allow me to explain a bit. The Room is a low-budget film written, directed and starring a rather strange fellow named Tommy Wisseau. In the film, Tommy stars as Johnny, a banker living in San Francisco who is completely in love with his girl friend Lisa, and desires nothing more than to wed her. Unfortunately, Lisa has grown bored with Tommy over the years despite his constant devotion for her, and she plots an affair with his best friend Marc. The film then follows these three characters and several others as the love triangle only grows more intense, and the storyline becomes cluttered with various sub-plots that usually end up completely unresolved.

I was introduced to the film during my senior year of college, when a friend of mine handed me a DVD of the film and told me that it was his favorite movie. I didn’t do much research into the film, and watched it promptly only to find it utterly unwatchable. I found it to be a bland, blurry, and horrifically written piece of melodrama with probably the worse love scenes in a movie this side of Glitter, and if memory serves correctly I even fell asleep during the first viewing. Of course, the fault with this initial viewing experience was simple: I watched it alone. A few days later I watched it with a large group of friends and my reaction to it was 100 fold. I laughed my ass off for an hour-and-a-half at how ludicrous the scenarios were, and how the film making was so blatantly trying to be prestigious, but instead always fell flat on it’s face. The Room felt like an alien creature picked up vague radio signals from Earth and then made a movie based on his vastly limited understanding of human communication. Simply put, that’s possibly the best second viewing experience I’ve ever had for a film.

What makes this movie such a pillar in bad movie-dom though? Well, for starters you should consider that it isn’t a genre film. Most shitty movies fall into the horror or sci-fi movie camp, as they are genres where film makers can just run wild with silliness. The Room, however, aspires to be a prestigious drama about love and betrayal, with Tommy Wisseau citing the works of Orson Welles and Tennessee Williams as primary influences. The thing is that the film goes wrong at every possible turn, and in usually the most hilarious fashion. The film has so many abandoned sub-plots, such as a scene involving a character’s altercation with a drug dealer, or a brief moment where Lisa’s mother says she has breast cancer, with neither of these situations ever being brought up again in the film’s narrative. It makes one wonder if Wisseau had planned a much larger film out initially, and would have possibly explored even bigger themes, had he not had such a troubled production. Sources say that these resolutions were dropped after several actors in the film dropped out of production, but their decision to leave the film only added to The Room’s tapestry of badness. 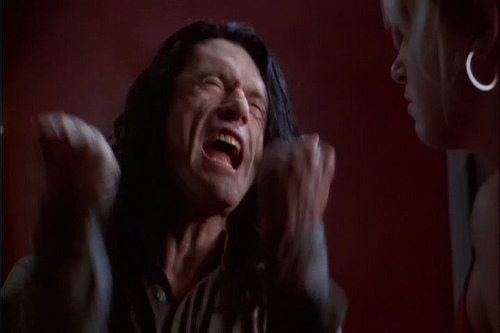 The Room is also one of those films that has a back story that is just as wacky and intriguing as the movie itself. For starters, there’s so much to say about just with the enigmatic Tommy Wisseau. With his grotesquely muscular physique, pale complexion, and bizarre accent that sounds somewhat like a mesh between French and German, Tommy is exactly the sort of guy you’d expect to see fronting a European death metal band, rather than filming an American movie. Being of unknown origin, very little is known about his background, although he claims to be American despite his accent clearly being foreign. Of even more dubious claim, however, is that Tommy has consistently referred to his film as a dark comedy since it’s amassed a major cult following, even though multiple members of the cast say that the film was never intended to be as such. People have even had long conversations on how the film received funding, and there’s even a half-way plausible theory that the film was a money laundering scheme with connections to organized crime, which might be the reason for Wisseau being so shady about his past. It’s difficult to reason whether this crowd pleasing piece-of-shit movie is an act of God or of Satan, but the fact that it exists alone seems to suggest that some sort of higher power dabbled their hands in it.

As of this writing, I’m going to say that I’ve probably seen this film at least 10 times, and yet there’s still plenty of reason for me to go back for more. I notice new flaws with the film each time I return to it (the latest being Lisa’s “neck” scene), and even new interactions from it’s fans. The film really is the ideal midnight movie in recent years, as it’s just such a thing of beauty to see it’s fans go wild and mock the shit out of this film with their own kind. The Rocky Horror Picture Show-esque responses from the audience are all so clever, whether it involves people throwing spoons whenever there’s a picture of a spoon on display, or shouting sexual chants during the film’s awkward erotic scenes. In this day-and-age when media is more available then ever to the public due to the internet and on-demand options, it’s a minor miracle that there’s this decade-old movie that’s holds frequent screenings, that usually plays sold-out shows to a devoted fanbase that even includes big-name comedians such as David Cross, Patton Oswalt, Tim Heidecker and Eric Wareheim.

In a way, it’s hard to believe that this movie has only been around for a single decade. With it’s crappy pop-soundtrack and dated look, the film could easily fool someone into thinking that it is a product of the 80s. Instead, it’s the product of a bizarre, delusional character named Tommy Wisseau, who may just also be an accidental satirist. Who knows whether he’ll continue on his film career, or whether The Room will remain his sole narrative feature-length, but in all honestly I feel that this is enough of a contribution that I’d ever really appreciate from him. Entertainment Weekly famously referred to The Room as the Citizen Kane of bad movies, but I digress. I’d call it the good movie of bad movies. 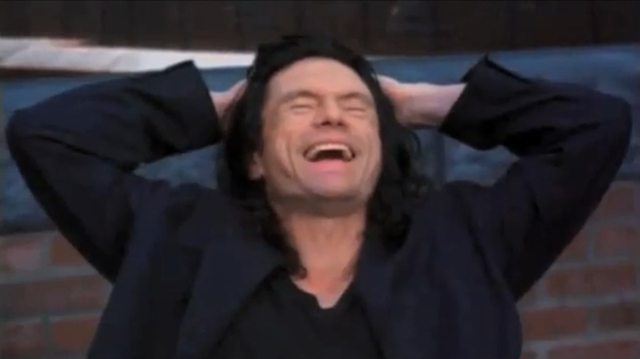