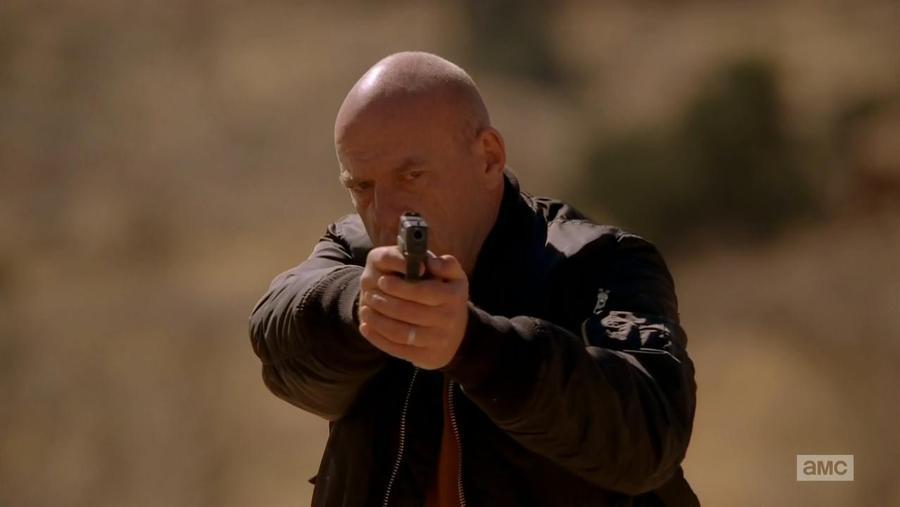 Talk about having a slow burn payoff, huh?

Of AMC’s two great shows, Breaking Bad is often seen as being less prestigious and dramatic than Mad Men. It’s such an ironic claim to make though, as Breaking Bad is more concerned with focused storytelling than Mad Men, as well as something far more tense and ultimately gripping. All regards to Mad Men, as it is a wonderful, wonderful television program, but when it’s final season airs next year, I doubt it will have an episode like To’hajiilee. It’s an episode that’s extraordinarily pulse-pounding, expertly filmed, and able to be fully satisfying even while giving viewers a cliff-hanger ending. This is television at its very, very best.

Picking off pretty much where last episode left off, we see Walt contacting Todd, and Hank and Gomez expressing their irritation with Jesse’s backing out on the Walt contact. Soon, however, we find that Jesse does indeed have a plan to bring down Walt, and it means getting to the source of the matter: threatening his money stash. The plan they concoct to extort the information from Saul’s bodyguard, Huell, proves wonders for two reasons. Not only do they find out that Walt stashed his money in barrels and had them relocated, but they also put him under watch so that he can’t be contacted by Saul. Later on in the episode when Walt learns that Huell is missing, this is certainly enough to drive his paranoia up to stifling levels.

Speaking of Walt, he once again showed us how sloppy a criminal he can be. Contacting Uncle Jack to put out a hit on Jesse certainly puts his request in capable hands, but their request proves to be a bit more than Walt bargained for. When they ask him to cook meth for them, you know that only bad things will come from this decision. Then, when Walt decides to drag Jesse out by contacting his ex-girlfriend and having her contact him, one begins to realize that his plans are running on fumes. Also, if Walt really took the time to think about it, I know he would have realized that Jesse probably hadn’t located his money. All of these fuck-ups on Walt’s part puts us well on the side of Hank…which is exactly why this episode had such a gut wrenching end to it.

Another attribute that specifies how brilliant a show this is, I will whole-heartedly admit that there were two plot points that I predicted in To’hajiilee, but it just made the whole of it even more nail-biting. The hyper-kinetic sequence of Walt driving into the desert while Jesse taunts him over the cell phone was so gripping, so well shot and edited, but I don’t think any of us really suspected that Jesse really had found his money. When Walt finally snaps and yells out to Jesse about all the people he’s murdered, it becomes clear what the real operation was at hand. As edging as this scene was though, I found the whole scene involving Hank taking his sweet time to arrest Walt was even greater. I knew Jack wasn’t going to back out on rescuing Walt, even after Walt asked him to stand down once he discovered that he would be asking them to kill his brother-in-law. I was thinking that Hank could get a sniper bullet to the head at any moment, and that would be that. Still, seeing Jack’s trucks come along put such an uneasy feeling in my stomach.

As I said before, Breaking Bad has always been about build up, and here it paid off ten-fold. I can’t tell you how agape my mouth was the whole time seeing Hank and Gomez with their arms drawn against a group of merciless killers. Such incredible pacing too, as director Michelle McLarren (in her final episode for the show) kept off the gunfire until the time was just right. We haven’t seen any casualties yet, but there’s so much to consider from the episode’s last few shots. We saw Gomez going for Walt’s car keys, and we also saw Jesse try to reach into the glove box. I’d hate to see Gomez, Jesse, or Hank go next episode, but I can’t predict an outcome where all three of these characters get away safe. This is exactly the type of scene we’ve been waiting for over these last few episodes, and only one thing about the aftermath is certain: it’s not gonna be pretty.