Yeah I know, Sunday’s episode of Breaking Bad can’t come here quick enough. I mean, we’re always eager to see the next episode, but after that cliffhanger! I for one am thinking there’s gonna be at least one major character death, and that the show is gonna make me fucking cry! Hopefully you can tide off the wait a little bit though, by reading this special editorial edition of my Breaking Bad column. While I had always intended for this to be a series of recap articles, I feel that the recent confirmation of the series getting a spin-off deserves a few of my thoughts and words. 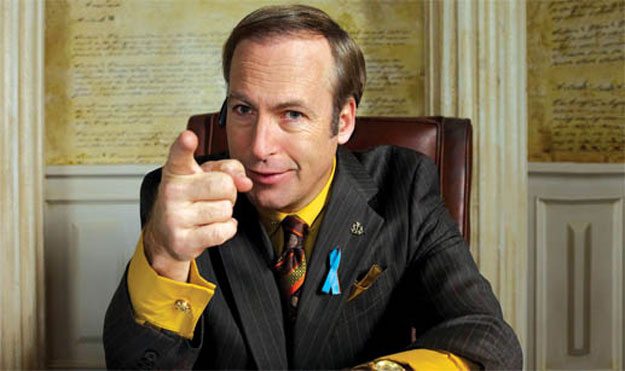 So yeah, it’s official. Breaking Bad is getting a spin-off tentatively called Better Call Saul, and it will act as a prequel series for the titular character. I for one am pretty excited…not everyone else is though. Since this announcement was made, I’ve talked to quite a few people that have expressed their misgivings with it. Some have told me that they’re skeptical that Vince Gilligan is not going to be the show runner, and also that they’re uncertain if the character can hold his own series. Of more valid concern, however, people have told me that they feel that making a Breaking Bad spin-off is merely a cash-grab tactic, and could ultimately prove gimmicky. These are all concerns that I feel are right to consider, but I also feel that there’s plenty of great potential in this series if it’s worked the right way.

For starters, I would say that Breaking Bad is a universe rich for exploration. Characters like Gus and Michael were so complexly rendered, as both humans and monsters, that it’s easy to feel that they have backstory not unlike the one we’ve seen Walt having these last 6 years. Over the last few weeks I’ve heard from a few people that they’d rather see spin-off series for those more action-prone characters, as opposed to Saul who comes off more as a middle-man. That’s exactly what got me thinking though: Saul is the ideal character for a spin-off as he is the middle man. This series will undoubtedly look into how the character obtained his underworld ties, and also possibly act as a prequel series for the show’s other great characters. How did Saul hook up with Euell and Kuby? What was Gus’ rise to power? How did Mike leave his cop background behind for a life of crime? All these answers could be seen through the eyes of Saul Goodman.

I also admit that I was instantly attracted to the idea of a Saul TV series, as I am a massive fan of the actor that plays him. Before Breaking Bad, Bob Odenkirk was probably best known as a comic, and a very respectable one too. His 1990s sketch comedy show Mr. Show has often been called the blueprint for more recent irreverent humorist shows like Children’s Hospital and Tim and Eric Awesome Show Great Job, and his work on supporting roles on The Larry Sanders Show and The Ben Stiller Show demonstrated that he was just such a shoe-in for secondary roles. It’s for those exact reasons, however, that people are feeling that he’s not a safe-bet for starring in an hour-long drama. I for one beg to differ once more. Odenkirk has proven that he’s a very good actor in Breaking Bad and has certainly transcended any notion that he’s merely comic relief. The scene from just two episodes ago when Jesse slugs him in the face is enough to ascertain this. Also, his bit parts in recent dramatic films (such as The Spectacular Now) shows that he is able to use his penchant ability for channeling gusto and charisma into true girth. While some have told me that it seems silly to cast the 50-year old actor into a prequel series, as it will be difficult to make the character look much younger than he appears in Breaking Bad, all I have to say is this: wigs.

As for Vince Gilligan stating that he would not be acting as show-runner, I actually think it’s a smart move too. As brilliantly paced and cohesive as Breaking Bad was, I feel that this sequel series needs to take on it’s own identity. I for one think that it should be a bit more comic, and dare I even say conventional? Saul’s profession as a lawyer should prove interesting as since Damages ended there hasn’t really been any new above-average law-based TV shows to come out. I feel that Peter Gould, the writer who will be serving as the showrunner, may very well see this show as an opportunity to skewer other Law and Order-esque programs, and perhaps even satirize them. Seeing that Gould is the actual creator of the character, I feel that he would know better than anyone how Saul’s show should look, act, and feel. Hell, I’d also be open to them giving the character a change of location, perhaps to a metropolitan city. Could New York possibly work?

I’ve thought about it long and hard, and I definitely feel that Better Call Saul really does have a lot of potential, and I don’t think it will tarnish the Breaking Bad legacy at all. That series has shown us that Gilligan and his writers are very cautious and adept at their story decisions, so I don’t think they’d be going ahead with this unless they knew they were onto something special. So what I’m basically saying, is that if you have any doubts about this decision, then you should wait and see. Until then however…only three more episodes of Breaking Bad to go!