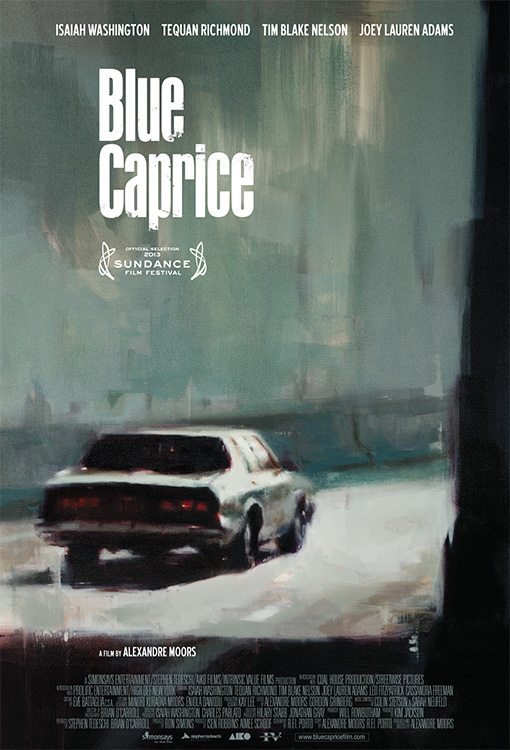 Blue Caprice is exactly the type of movie that aims to give off one single emotion: unease. Based on the true story behind the Beltway sniper attacks, director/screenplay-writer Alexandre Moors’ film certainly isn’t trying to be anything light, as one would expect. Still, viewers may be surprised that the film doesn’t carry the framework of a thriller to it, and actually comes off of something of a restrained bio-pic on a real-life American killer, and is actually comparable to the Don DeLillo novel Libra in that sense. It’s a film that both chilling and haunting, perhaps a bit too much at times, but it is also an unforgettable horror story, and one that speaks to contemporary America.

The movie takes us back to 2003, and examines the lives of John Allen Muhammad (Isaiah Washington) and Lee Boyd Malvo (Tequan Richmond) before and during their killing spree. Malvo is a teenager from the Caribbean, who has come to the states to live with Muhammad, a friend of his mother. While Muhammad does take on a father-figure role for Malvo, it’s also clear that he is an unstable and violent man, willing to thrust his brutal ideas on the impressionable Malvo. He eventually coerces him to help him in a series of murders, hoping they spark wide-spread chaos throughout America.

The fact that these events happened merely a decade ago (which left 10 dead, three critically wounded) can really strike a nerve with people who think America has become a far safer place to live in the last 20 years. Moors paces the film with deft skill, and knows what to show viewers and what to hold back. While we see some of the sniper victims, there’s plenty of violence that is depicted off camera, or even only hinted at. The soundtrack is also intrinsic to the film, and while Blue Caprice relies more on sound effects to establish a mood than music, in the scenes when music is played it’s used to just such immense effect. One scene that depicts Malvo’s first killing, against an eerie and chaotic track that could be considered neo-jazz, has lingered with me for day. The build-up to the inevitable violence is hardly subtle, as we watch preliminary scenes that involve the character shooting guns in the forest, or playing violent video games, but it’s hard to fault the film for being so blatant regarding something we know is coming.

While many viewers will mainly cite the film for it’s disturbing violence, it would be remiss for one to miss out on the film’s subtext. Blue Caprice is about the hardships immigrants face in America, especially in the beginning. We see Malyo struggling to adapt or meet people in this new environment, which sheds some light on why he might do such terrible things when asked to by a father-figure. There’s also plenty of allusions to the wars and military conflicts our country is involved with, at times even saying that the delusional state of these two killers reflect on America as well. It’s certainly not overtly dense, but it’s gratifying to know that there are movies out there about serial killers that aren’t as simple as they appear to be.

The performances are excellent and perfectly in sync with the film’s tone. Isaiah Washington is spectacular as Muhammad, playing him as a quiet force of evil that you don’t realize when will erupt. Richmond also shines as Malvo, especially in regards to his character growth. We see this young boy transform from a quiet and sympathetic youth into a remorseless killer within the film’s 90 minute running time, and Malvo’s performance has us on board at all times. Recently, the real-life Malyo had said that Muhammad had sexually abused him growing up, a claim that Moors doesn’t delve into. Still, the two performances are so tense, that any reference to sexual abuse could have potentially come off as subterfuge. Also, Tim Blake Nelson is great in his role as Ray, Muhammad’s gun-loving friend, and it would have been nice to actually see a bit more of him in the film.

Blue Caprice is certainly a work of great craft and precision, but it’s also not something I could so easily recommend. It’s certainly not a feel good movie, nor is it anything particularly original. What it is is an exemplary debut film, and a painful reminder of how dark humankind can be, but that’s mostly all it is as well.