You are here: Home / ENTERTAINMENT / Album Review: Neko Case – The Worse Things Get… 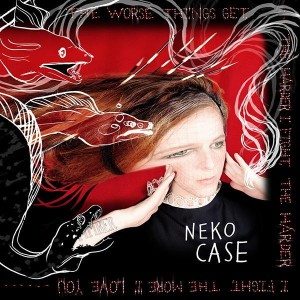 It can be hard to look at music from a solely academic perspective. So much of what gives music its emotive qualities is the environment in which we hear it, and our ability to further the music by relating it to whatever is going on in our personal lives. When we travel with an album through time, it continues to latch on to certain objects, and its impact on us as individuals becomes increasingly distinct. This is one of the reasons why I feel the need to spend countless hours with music before I can start to decode if it’s “good” or not. Whenever we return to our old favorite albums, part of the enjoyment comes from being brought back to the time and place that we previously experienced them in, and as the notes are played they come flooding back as memories. As we get older, I feel it becomes somewhat more difficult to make these emotional connections with music, as it’s rare that a set of songs will stick to our souls as easily as they did in our teenage years.

Anyway, this past week has been a particularly hard one for me emotionally, involving the potential death of a family member. While I won’t get into the details, I feel very lucky to have had Neko Case’s The Worse Things Get, The Harder I Fight, The Harder I Fight, The More I Love You, because I don’t think there is a more suitable album to come out this year when it comes to dealing with loss. So based on that alone, my review of this album will be somewhat biased, as it would be rare for someone else to have had the exact experience I’ve had. If you’ve managed to read this far, you might as well stop now, because I’m not writing this for you, I’m writing it for myself.

Still, The Worse Things Get…” is a collection of songs that are prone to bring back hidden pains tucked in the recesses of your consciousness. Maybe it’s a stretch, but the feeling keeps reminding me of how I felt after seeing Pan’s Labyrinth, and how I was suddenly able to remember what it felt like to use imagination as a source of escape during the hardest times of childhood. Neko is an artist who’s not afraid to make us feel this incredibly intense remorse for her characters. Take the haunting, a cappella centerpiece “Nearly Midnight, Honolulu” for example, in which Niko recalls a time she overheard a mother violently shouting at her child at a bus stop /Get the fuck away from me, why won’t you ever shut up/ . It doesn’t take an expert to tell that the place these songs came from is real.

While I tend to think all 12 tracks here resonate with deep personal turmoil, Niko keeps us floating along, and comforts the listener through a gently stirring array of tracks, many of which allow for humorous insights. There’s the bare-bones rock of “Man” — the album’s defining single — which is accompanied by M. Ward’s scraping guitar shredding, later followed by the abstract, avant leaning “Where Did I Leave That Fire” and the cathartic, horn led closer, “Ragtime”. So while I feel almost immediately depressed when I put on this album, I also somehow know that everything will turn out all right in the end, as the album’s flow nestles me into a state of emergent calm. Another example — although it may seem too simple to mention — the segue between “…Honolulu”, and “Calling Cards”, which opens with the gentle strum of an acoustic guitar, is so devastatingly beautiful and warm that I seem to get choked up at the mere thought of its occurrence.

Many of these songs contain a cappella sections with little to no musical accompaniment, yet Niko never once sounds vulnerable. At this point in her career, she has certainly reached veteran status, and similar to Tom Waits’ relationship with age, Niko has never sounded as strong willed and assured as she does here. Even the sole cover, “Afraid” — originally a Nico song — sounds so completely a part of the album’s own overarching vision, that it might as well be her own.

It’s curious that Niko wrote a song titled “Where Did I Lose That Fire”, because she certainly hasn’t lost it. Despite the four year gap between Middle Cyclone and this album, Niko has been making consistently excellent music both alone and with The New Pornographers ever since the mid 90’s, so it’s amazing that she still has so much to say. Anyone could tell you that these songs are well written and tenderly sung, so I’m just here so say the album works as a means of therapy as well. Even without the addition of my personal crises though, this is quite arguably Neko Case’s best solo work to date.

If you’ve been following my reviews you’d have noticed that I mark my favorite tracks below…. well that goal has never been harder than it is now, as they are all deserving of that beloved asterisk. I could say there isn’t a bad song, but that would be a lie, nothing here comes close to being bad.