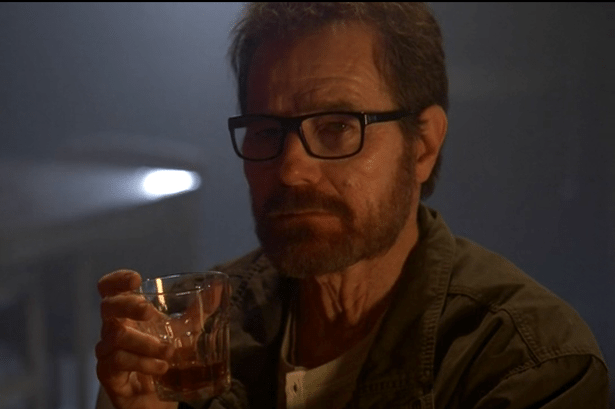 Well, that was bleak, huh?

That’s obviously saying a lot for Breaking Bad, as this is a show that’s specialized in showcasing humanity at it’s lowest, including child murders and drug abuse. This penultimate episode, however, had us view Walt and Jesse at their absolute nadir, and it was certainly unpleasant as viewers. Whether we have sympathy for these characters or not, we’ve watched them for 60 episodes as they’ve gone from drug-game entrees, to become practically king-pins, and now they’re in horrible places because of their terrible crimes. Having an extended running time tonight (75 minutes with commercials) it was all very depressing to watch for sure, but it’s necessary too. This further augments the fact that the series finale mustn’t hold back at all, on the writer’s part or on Walt’s.

The episode opens up with Saul going to change his identity by enlisting the service of the “disappearing man” that we’ve heard of so elusively for years now. Walt then meets up with Saul, and he’s still trying to have his former lawyer help him with his predicament. Thing is Saul is done with helping Walt now, and even suggests that he turn himself in as it’s the only way he can give his family some support, what with his frozen bank accounts and scant possibility of ever sending them his dirty money. In fact, once we see where Walt is re-located by his forger (played by Robert Forster) we realize that Saul was probably right on the money. Walt is sent to an isolated cabin out in New Hampshire, and he is warned not to leave the premises or else he’ll be caught immediately. Knowing that Walt is going to die from his cancer eventually, this actually seems to be just as bad a fate as prison for him, if not more so.

Of course, while Walt’s predicament is harsh, Jesse has become a far more sympathetic character at this point, and his scenes this episode were far more heartbreaking. Right from the beginning when Jack discovers that Jesse ratted out Todd as a child killer on Hank’s video, you could tell that his situation just went even worse. Even though Todd talks his uncle out of executing him (only so that he can learn to cook pure meth for his love interest, Lydia), Jesse receives plenty of torture from these guys this episode. What made it all the worse to stomach though, is that it looked like Jesse might actually escape, as he uses a paper-clip to undo his cuffs, and then through a rather impressive balancing act, he breaks out of his cell…course that doesn’t exclude the security cameras. Then in the subsequent scene, seeing Todd knock on Andrea’s door was so horrific as you knew right then and there that he was going to kill her as Jesse watched, and if you were like me you probably were thinking that her character was sacred ground…Breaking Bad isn’t that kind of show. In a show that has offered us morbid takes on all sorts of criminal scum, it’s certainly saying a lot that Jack and his boys are the most EVIL PIECES OF SHIT to grace television in a good long while. I even think they give Game of Thrones’ Jofferey a run for his money. Still, the fact that Brock was spared makes me think that Jesse will somehow become the child’s adoptive father, and I would certainly be glad if the writers found a way to take that path.

The real signifier that the show is coming to an end, however, occurred in the final scene. Walt finally ventures out of his abode to a pay phone at a local bar, and then calls his son, and tell him that he is going to send him a box of a few thousand dollars. Walt Jr., however, can only berate his father and tells him he hates him for killing Uncle Hank. When Walt then calls the DA of the Albuquerque police, it seems that he is certainly about to turn himself in…then the prime motivator happens. While sitting at the bar, the owner is flipping through the channels when he comes across a filmed interview with his old Grey Matter associates, Elliot and Gretchen. As we’ve always known, Walt has always aspired for his brilliance in chemistry to make him world renowned, and he previously lost his opportunity with Grey Matter when much younger in life. Walt realizes that he has become known for his chemistry skills now, but in a much different way, and when Gretchen says that Walt is no longer with us, and that he’s become Heisenberg, then we can see how that was all Walt needed to go all out, and return to New Mexico. The decision to play the show’s theme music at the end was a fantastic touch, and truly sets us up for…for…for…

*gulp* ready to see how it all ends?