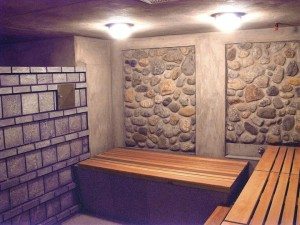 Scene: Steam room of your local gym after a long workout. You are tired, sweaty, sore, and ready to take a nice relaxing trip into the steam room before taking a cooling shower and heading back out into the real world. You step into the steam room; you’re towel wrapped around your waist, and in my case, mentally getting pissed at whoever bought such small towels.

The temperature in the steam room is great. It’s steamy enough that you can’t make out features of the other people there. The actual heat is at that point where it just feels good. A few degrees more and your brain would start to feel like it was cooking. A few degrees cooler and you’d be in not quite warm enough land. There’s a guy in the steam room, and by the dampness of his towel, you assume he’s been here a while. Either that or he soaked his towel before entering. As you enter, Mr. Damp gets up and leaves. If your gym is like mine, you can see through the steam room door to see him fill up a water bottle. If not, you’re more likely about to be surprised by what’s about to happen. Mr. Damp then comes into the steam room and, without asking anyone, reaches WAY WAY up and starts to fling water from his bottle onto the thermometer!!

Why is this upsetting, you might ask? Well, remember that whole thing about not wanting to have your BRAIN GET COOKED IN YOUR SKULL? That’s why. Now, the thermostat is going to get fucked, and you’re cooking, and suddenly, this nice, relaxing steam session has turned into a watery, steamy HELL. God forbid Mr. Damp asks if anyone is ok with him fucking with the thermostat! If he’s not hot enough, then, of course, we all must be languishing from the same chilliness that he is! In fact, we’re all just sitting around, wishing there was a way we could get warmer, but trying to avoid having to use body heat, since this is a post Giuliani NYC and that type of behavior could get your gym membership revoked. Nor is it like there are showers nearby that feel like they go to a hotter temperature. Of course not. They only option you have right now is to fuck with the thermostat!!

“Ok, so it’s hotter, David, but, why the vitriol? Can’t you just leave?” you might be asking. “Why not go to one of the hot showers you were talking about?” Well . . . WHY THE FUCK SHOULD I HAVE TO?!! I’m not the one violating the gym’s membership rules! I’ve been to a gym where the thermostat was broken for six months. Ok, that was the official reason. We think its cause the health department shut shit down after one too many guys were caught having sex, BUT outwardly, it was due to the thermostat being messed with. Furthermore, it DOES mess with the internal setting of the thermostat, which causes the whole thing to not work properly, in general. As in, the thermostat goes on, and then will cut off at a certain temp, no matter what, and only restart when it gets back to a certain temperature. So, you’re only delaying it from actually turning on again, since it’s going to quickly cut off and have to reset. But, of course, you’re so used to frying your brain on steam that you have no idea how to handle a temperature that’s not over 120 degrees.

Now, I’ve also heard of electrical fires being started, but I have no real evidence of THAT happening. So, it’s there, but really, there are so many other things wrong with the whole venture anyway.

Oh, and god forbid you actually tell the person to ask or make it clear that you might be put out in any sort of way! I’ve almost gotten into fights because someone did this, and often will just walk out of the steam room in general. Which, has gotten me some weird looks, and I don’t understand it, since I’m leaving you the fuck alone. But, some people just can’t be helped or pleased.

When I become a superhero, I’m going to become the Thermometer Nanny.