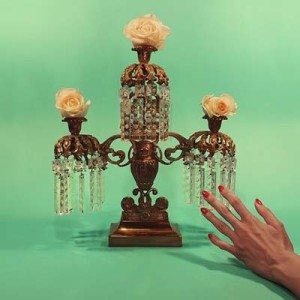 Camella Lobo’s Tropic of Cancer alias represents the epitome of a “musical project”. Her tracks — which are a particularly unglamorous tour through goth, minimal wave, and drone — feel more like art installations than traditionally evolving songs. We feel as though the music being presented has been premeditated, catering towards some kind of definitive aim, without ever once becoming an inch more or less than what it’s meant to be. As listeners, we are simply left to examine these pieces in their unwavering state, hovering over them without ever being completely immersed — or even knowing much about what they are supposed to represent. In fact, the entirety of Tropic of Cancer might as well be represented as one towering sculpture sealed behind a glass box; each of the individual tracks represent this unknown entity from a similar, but slightly altered viewpoint.

Despite the influence of shoegaze, Camella’s palette of colors revolves almost strictly between black to dark gray. Nearly every track to come out of her project thus far has been based around the convergence of drum loops, Joy Division baselines, reverbed guitar textures and melted, undecipherable vocals (from Camella herself). It’s a style that is in no way unique unto itself, as this cold-wave music has actually become somewhat over-popularized through the last few years, but ToC has proven to stick out from many of their peers through a dedication to craft and unrivaled authenticity.

Part of why Tropic of Cancer’s singles and EP’s have been the source of such intrigue and speculation is that they have come out on Downwards — a label run by minimal techno titan Karl O’ Connor (AKA Regis), that specializes in dark, industrial electronic music. Now however, for their true debut (2011’s The End Of All Things was only a singles compilation) TOC has moved to the london based Blackest Ever Black. Since TOC share a thing or two in common with Blackest Ever Black showcase artist Raime, the move couldn’t be more fitting.

Restless Idylls is Camella Lobo’s attempt to take her project in some brighter directions — although I say this reservedly as the tracks here are as haunting and mournful as ever; just about as far away from tropical as one could get. However, a few tracks do see Lovo experimenting with some brighter chords and textures. The prime example of this is “Children Of A Lesser God”, the unquestionable highlight and centerpiece of the album. Though the track was actually released a year ago, this rerecorded version easily stands as the most vibrant and audacious track in the ToC library. It’s the track that all the others seem to revolve around, and it proves to be enveloping without sacrificing any of ToC’s grit or integrity.

This is also Camela Lobo’s attempt to make her project work in an album format, and on those fronts she hasn’t faired so well. In addition to “Children Of A Lesser God”, many other tracks on Restless Idylls have been released beforehand on singles/EP’s (although they seem to have been slightly altered), which is a bit underwhelming. In fact, there is actually very little that separates this from her 2011 singles compilation — both in reference to the quality of the songs and overall mood.

Karl O Connor — who is credited with production and mixing duties — has added some rippling, electronic undercurrents to Camella’s otherwise stable sound, and if you’re playing the music loud enough, it’s enough to give the pieces an intense quality to them; especially during otherwise bland tracks like “The Seasons Won’t Change (And Neither Will You)”. But otherwise, Restless Idylls is so unambitious and lacking in variety that it will be hard to recommend to much of anyone. Overall, these are tracks that travel in a circular motion, never ending up much further than where they started. While this may be the point of their existence, if so, their premise has become tired and predictable over the course of the artist’s 5 year career. If you’re willing to give Restless Idylls a shot, just know that you’ll have to give it a mighty big push to get it anywhere off the ground.

6.) The Seasons Won’t Change (And Neither Will You)