You are here: Home / ENTERTAINMENT / Gravity – Can You Feel It? 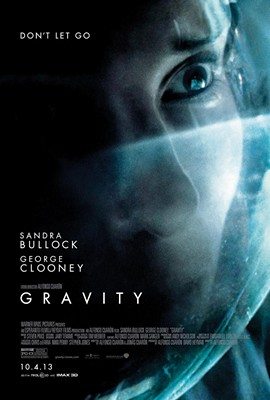 If you were to ask any self-respecting cinephile to compile a list of their top-ten favorite sci-fi movies of the last decade, then there’s pretty much just about one film that’s a sure-fire inclusion on that list: Children of Men. Alfonso Cuaron’s dystopian epic was a masterpiece of the genre, that not only painted a grim picture of a future comprised of humanity’s worst feats, but it also was one of the best made films of the 2000s with cinematography and camerawork that made for chase/action scenes that were as lush as they were exciting. While the film didn’t prove to be a hit at the box office, one would have thought that Alfonso Cuaron’s career would have really taking off after the towering critical acclaim the film received, with rumors popping up over the subsequent years that he might direct a big-budget tent-pole release, with everything from X-Men to Star Wars being brought up. Instead, he would spend the next few years trying to get an original project off the ground…

Gravity is another checkpoint through Cuaron’s recent foray into “hard-sci-fi”, only with a noticeably larger budget than Children of Men, and with even more emphasis placed on the spectacle of it. Set entirely in space (and presented in a narrative structure that’s virtually real-time), the film concentrates on female bio-medical engineer Alex Stone (Sandra Bullock) on her first space shuttle mission. During a spacewalk near the mission’s end when she and veteran astronaut Matt Kowalski (George Clooney) are repairing a space telescope, they receive a warning that debris from a missile strike from a Russian satellite is coming their way. Sure enough, a cavalcade of material come colliding towards them, that cuts off their communication with Mission Control, as well as separates the two in the infinite vastness of space.

It’s easy to see why it took Cuaron quite a long time to get the proper funding for this film. Gravity is a $100 million science-fiction film that basically only has two actors in it, and also has long periods of time where not much happens. Such a film could be seen as an incredibly risky gambit by studio heads, which is possibly why the film’s right were transitioned from Universal Studios to Warner Brothers. That said, I think it probably would only take about 15 seconds of any footage taking from this film in order to convince someone about the potential for success in this film because frankly, Gravity is freaking beautiful! Similar to how Cuaron used his mastery towards filming long takes to give such auteur-ship to Children of Men’s chase sequences, Cuaron has done the same with his digitally rendered image of space. The film’s  first 17-minute contain no cuts at all, and it makes perfect sense also (what would he cut to? Another star?), and the film doesn’t become any less lush from that point on. The shots are all pitch-perfectly presented, and Steven Price’s score only augments the film’s beauty and excitement (especially as the film plays it by science-fact rules, and therefore the film lacks sound while in space). The technical craft alone puts this film head-and-shoulders over most other recent film about survival amidst overbearing circumstances.

In terms of human magic, however, Gravity isn’t as flawless. While it’s clear that Cuaron is trying to have us emphasize with the characters plight, such as having witty dialogue between Alex and Kowalski, and including a sub-plot about how Alex has been grieving over the accidental death of her daughter, it isn’t too unfamiliar from other such films. In fact, there are more than a few tropes here that are common-place for such thrillers, and it actually downplays the film’s attempts at conjuring up a spiritual sense. None of this is done in an overtly maudlin fashion, nor does it hurt the film’s vision, but it’s quite upsetting when one realizes that the film would be rather mediocre without the spectacle. Also, in terms of acting, while Bullock and Clooney are both fine in their roles, you can tell Cuaron wasn’t so interested in making this film an acting showcase. This is fine of course for a movie that has this much meticulous attention paid to conjuring up it’s veneer and status as a one-of-a-kind experience.

Gravity isn’t likely to go down in history as being as revered a film as some other films about deep space exploration, such as 2001: A Space Odyssey or Solaris(referring to the Tarkovsky original). For one, it’s plot is too skeletal, and secondly it’s no where near as philosophically dense as those two films, despite hitting all the necessary symbolism watersheds (gotta love the fetal position!). If not quite an instant-classic though, Gravity is undeniably a must-see on the big screen, and it’s really a cinematic experience that only happens once in a great while.  It’s a vivid showcase of what expert contemporary film making can do with a gigantic budget, that feels so genuine and original, while in essence being pure popcorn entertainment as well. Only time will tell if the film will be as breath-taking on our blu-ray players, but for right now it’s gorgeous to now end on the big-screen, and might actually be one of the few films that I really recommend seeing in 3D as well.