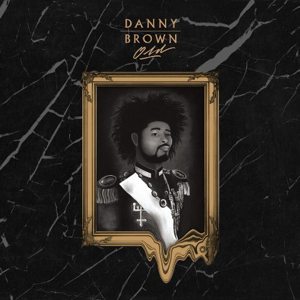 Hip-hop is a music culture that’s known for turning nobodies into somebodies fairly quickly, but I don’t think very many rappers can say they have had the type of career growth that these last two years have brought Danny Brown. The Detroit MC put out his critically-acclaimed album/mixtape XXX in 2011 and quickly made headlines as one of the year’s best freshman acts, despite the reality that this was actually his second album. The rapper proved to have vast cross-over appeal, appealing to both hip-hop heads for his tough guy image and raw subject matter, but also he found much veneration from the indie crowd due to his unique style, and enigmatic personality. In interviews Danny Brown often presented himself as an intelligent man with an utmost comprehension on music (name another rapper who’d name drop Joy Division and Radiohead as influences) and he almost felt in direct contrast to the sex-and-drug addicted character he played while on record, but in other facets he seemed to be very much in tune with his “adderall admiral” persona as well. Some interviewers would remark that Danny Brown seemed to be under the influence of drugs like MDMA and lean when they were talking to him, and his twitter feed regularly sees female fans offering him sexual favors. The fascination regarding Danny Brown’s illicit behavior perhaps climaxed last April when performing a show in Minneapolis a girl ran on stage and performed oral sex on him, as he continued to rap. It’s still foggy at this time whether his acceptance of the blowjob was a publicity stunt, or whether Danny Brown really is the “dirty old man” his songs would suggest he is, but what is clear is that this is exactly the type of attention an underground rapper needs to be successful now-a-days….that and continuing to release great records.

Old  is Danny Brown’s first album since his breakthrough with XXX. With all the hype and anticipation surrounding the album, Danny really needed to hit it out of the park if he wanted to maintain his standing as one of rap’s most unpredictable talents. In honesty, it was either that or he’d simply be known as the “guy who gets head on stage”, if this album was to fall short. Well, I’ve been given the proper time to digest Old now, and I can proudly say that neither Danny or his fans should be worried about that happening. This album is great, really great actually, and it’s exactly the next evolutionary step Danny Brown really needed to take as an artist. It’s exactly the type of album that his fans wanted, yet also a very surprising one too.

For starters, it must be brought up how enormously diverse the record is. Starting off with the album’s two Paul White produced tracks (Side A (Old) and The Return), the album initially has a feeling that evokes Mobb Deep-esque gangsta rap. Proving he is an emcee that is unparalleled when it comes to changing his voice (on The Return I initially thought his verse was coming from a guest rapper), the album starts off with us hearing his Detroit drawl as gruff and grimy, but when the album reverts back to club tracks, we hear Danny switch back to his high-pitched yelp that made XXX so noticeable, only this time it’s more danceable. Enlisting the help of electronic dance artists like Rustie and Purity Ring, Danny Brown has once again bridged the gap between hip-hop culture, rave freaks, and pitchfork.com’s readership, and years from now it’s likely that we’ll be saying Danny Brown was one of the first (and best) rappers to mesh hip-hop styling with dub-step, EDM, and contemporary house.

Danny Brown’s rapping has improved for this record as well. XXX had plenty of intentionally messy rhyming, but here the rapper sounds more polished and certainly faster. Songs like Kush Coma and Wonderbread are enough to show that Danny Brown might still be getting started when it comes to weird rhyme patterings, as their more inventive than ever. The songs are endlessly fun and fill the head with the type of imagery that one would expect more from Frank Zappa or Captain Beefheart than from a contemporary rapper. Even though Danny Brown said this album would have less “dick-sucking jokes” than his previous work, it’s clear that he’s still likely to retain his image as an affable low-life. While Danny Brown’s sex rhymes are possibly even more explicit than they were on XXX (one of the cleanest lines on the track Break It is “Make me wanna rip off your pants/Put my hand between your legs”) they’re never mean-spirited or reliant on shock value as opposed to other rappers like Necro. In fact, these songs only augment his more reflective side, which he showcases on album stand outs like Lonely and Float On. It’s tracks like these that really resonate with the listener, as on them Danny (mostly) evades talk about pussy and blunt smoke, and instead speaks of how he feels so lost in the world and desires something more than all this debauchery. In a way, Danny Brown is just as introspective and sincere a rapper as Drake is, just in a much more grimy fashion.

While Danny Brown has said that he’s not so much a perfectionist while in the studio, and favors doing whole songs in one take, those that have been following the release of Old will notice that it has been a process for Danny to get the album’s tone just right. Some songs have been altered, such as Handstand which had previously been leaked online with the title Express Yourself and had a vastly different beat, while other have been scrapped entirely such as ODB. Knowing that, and that the rapper has been doing extensive touring as of late, it’s feasible why the album had a few delays before finally being officially released last week. This really speaks to Danny’s expertise with creating albums that sound cohesive and fluid despite juggling numerous genres, and such a record could of resulted as being as little more than a curious mess in the hands of a another artist, but instead Danny Brown has made a near perfect modern hip-hop record. Old has a seamless flow to it as a whole, it’s virtually devoid of any filler, and one is able to enjoy it while listening to in small increments as well as sitting through the whole hour it would take to listen to it in it’s entirety. While XXX was a fantastic rap record which can now be seen as the perfect introduction towards Danny Brown’s twisted POV, it wasn’t for everyone. The rhymes were occasionally a little too vulgar, and it could take a while to understand what the emcee was trying to do with his rapping style. Old, however, is as close as an album gets to being for everyone, and it’s as boundary-pushing and genre-smashing a hip-hop record you’re likely to hear all year (sorry Kanye).