The ghost of Anton Chekhov is alive and well and living through the pen of playwright Sharr White  at the Samuel J. Friedman theater.  White’s period drama, “The Snow Geese” evokes all the elements of the esteemed Russian dramatist’s works: grief, sadness, unfulfillment, pining,  and jealously.  These adjectives also describe the love life of this reviewer. But that is most likely too much information for the reader and not particularly relevant to this critique. So let’s refocus our attention to this profound, new, American play.

It has been 12 years Mary Louise-Parker  broke hearts and nabbed the 2001 Tony for her portrayal of Catherine, the conflicted and troubled daughter of a math wizard in David Auburn’s Proof.   Parker’s  long awaited return has been well worth the wait as she continues to break hearts as Elizabeth Gaesling, a once affluent member of high society who is now widowed and left in debt. Of course, the financial burden bestowed on her matters little to the deluded matron as she continues to play the violin while Rome burns around her. Joining her in this state of delusion is her oldest son, Duncan (Evan Jonigkeit). Regardless of his father’s passing  and potential deployment to Europe for war duty, he revels in his callow and arrogant behavior. After all, he is the  spoiled Princeton grad and  the “golden goose” of the family.  Jolting them back to reality is  Arnold (Brian Cross), the youngest and more rational son who warns that the family’s monetary goose may well be cooked. Yet he is quick to bat eyes at Viktorya (Jessica Love), the Ukrainian maid.   Elizabeth’s disapproving sister, Clarissa Hohmann (Victoria Clark)  and her husband, Max (Danny Burstein) , round out the glum tribe as they keep their seats warm and contemplate both their lives long gone and imminent  bleak futures.

The family has gathered in their country home in Upstate New York in 1917- a short time  after the passing of  Theodore Gaesling (Christopher Innvar) . Aside from shooting game, there isn’t much to do here. Elizabeth is sad, Clarissa doesn’t want to do anything remotely resembling fun, Max is so bored that he’s reading several newspapers a day, Duncan is happy to  pontificate, Arnold attempts to warn the family of troubled financial waters ahead, all while Viktorya repeatedly polishes the silver.

By now you are probably thinking, “My goodness! This sounds more fun than a Breaking Bad  marathon! How can I get tickets to see this rollicking tale? ” In true Chekhovian style, the pace is in fact slow. Yet White’s play shoots at the heart of where our societal values lie, and strikes the target with intelligence, subtlety,  and grace.

“The Snow Geese” is playing a limited run through Dec. 15th. If frivolous, cotton candy entertainment is what you’re seeking, “Mamma Mia” will be more than happy to have you.  But if fine performances and poignant themes are more in line with your idea of  a lovely night at the theater, aim to get a ticket before these “geese” fly away. 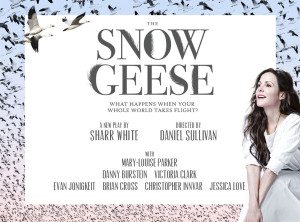