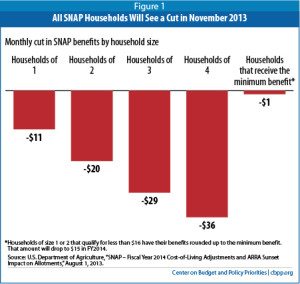 Days before nearly two million New Yorkers will see their food stamp benefits slashed under a $5 billion cut to the Supplemental Nutrition Assistance Program (SNAP, formerly known as food stamps), a major new study from Food Bank For New York City reveals that current benefit levels are already inadequate when it comes to meeting basic food needs. Food Bank’s report, which is published every four years and is the only comprehensive study on emergency food participants in the five boroughs, makes clear the effectiveness of adequate benefit levels and the danger of continuing to cut vital anti-hunger resources.

The report, titled “Hunger’s New Normal: Redefining Emergency in Post-Recession New York City,” finds that more than 40% of SNAP recipients in the five boroughs are also turning to food pantries and soup kitchens to keep food on the table. Despite a 2009 SNAP benefit increase, 75% of people accessing food pantries and soup kitchens who are on SNAP report that their benefits last only three weeks into the month. This finding has major implications as the 2009 increase, enacted as part of the American Reinvestment and Recovery Act (ARRA), is scheduled to be clawed back this Friday, November 1 – a $5 billion cut that will result in nearly two million New Yorkers having less money for food each month.

With current benefit levels already failing to last the month, these cuts will create a hunger crisis for many families right in time for the holidays. Beginning on Friday, a household of three will lose, on average, $29 per month in SNAP benefits – an estimated loss of 76 million meals for New York City residents, more food than Food Bank For New York City, the country’s largest food bank, distributes in a year.

“New Yorkers receiving food stamps at current benefit levels are already forced onto the lines of food pantries and soup kitchens when their dollars simply can’t last the month. What happens when their food budgets are slashed this Friday? What happens if Congress passes an additional $40 billion in cuts to this program? New York City is on the edge of a hunger cliff, and nearly two million of our city’s neediest citizens are about to be pushed over the edge,” said Margarette Purvis, President and CEO of Food Bank For New York City.

Hunger’s New Normal also finds evidence that food poverty has been on the rise since the Great Recession and the country’s weak economic recovery.  Since Food Bank’s last report in 2007:

“It is unacceptable to cut funding to food stamps at a time when need is outpacing resources.  Our policymakers must work to protect programs like SNAP that, when adequately funded, are proven to be incredibly effective tools in fighting hunger,” concluded Purvis.

The report is based on data collected between November 2011 and July 2012 from more than 1,200 emergency food program participants at 141 food pantries and soup kitchens throughout the five boroughs. Data was collected on a variety of topics, including patterns of participation, satisfaction with food service, demographics, household composition, income and employment, participation in income support programs, participation in food assistance programs (like SNAP), housing, and health.

On November 1, 2013, 76 million meals lost: This November, sweeping cuts to SNAP benefits will take effect, resulting in the estimated loss of 76 million meals for New York City residents. A household of three will lose, on average, $29 per month in SNAP benefits – or nearly $19 million per month in New York City alone. These cuts are the result of a deal struck in December 2010 in order to pay for a $0.06 per meal increase in federal school lunch reimbursements as part of the “Healthy, Hunger-Free Kids Act.” While the White House promised to work with Congress to restore the funds before the cuts could take effect, the promise has yet to be fulfilled.

New York City alone will lose approximately $225 million a year in food purchases, which is money that supports jobs in our retail food sector and throughout the economy.  The loss of 76 million meals over a year is more food than Food Bank For New York City – the largest food bank in the country with a robust and experienced network of 1,000 charities – distributes annually.