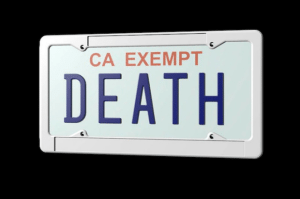 I can forgive Death Grips for canceling their show at Webster Hall earlier this year. It’s not because I’m not still angry about it, because believe me, I am, but at the same time, I admire how they do things on their own time and don’t give a fuck about the orders of whoever it is that’s supposed to be in charge of them. Also, it’s not like I’d be able to find a replacement for their groundbreaking brand of crazed industrial hip-hop (…if that can even be considered an accurate descriptor). Although I’m sure they respect their ever-increasing fanbase, Death Grips are that rare band that are 100% formative on artistic expression. They care so much about constantly releasing new music that is bursting at the seams with expressiveness, that they care very little about whether or not they’re making any sense in the process.

Ever since their debut full length/mixtape, Ex-Military, Death Grips have been on an unstoppable roll that has garnered them near worldwide acclaim. That’s not too shabby for a sadistic, S&M crazed junkyard act, who by the way, have no intentions of appealing to such a large crowd. The Money Store (my personal favorite record from last year) — with its psychopathic intensity — was perhaps always going to prove successful though; why else would Sony’s Epic Records choose to sign them? Death Grips didn’t care much about that deal either though, as they chose to leak their subsequent album, the equally rampant No Love Deep Web — originally planned for a 2013 release date — a mere 6 months after The Money Store. It seems as though they have been on an anxious, paranoid, drug fueled frenzy to release as much music as possible within a 2 year time frame, because last Wednesday, Death Grips leaked their entire new album — this time intended for a 2014 release — months ahead of schedule. Maybe it’s because they think it’s funny, or maybe it’s because they actually are coked out of their minds, but we should be glad, because the music world really needed an act like Death Grips to shake things up a bit.

After the more dreary, lyrical focus of No Love Deep Web, Government Plates is both Death Grips’ return to the shape shifting arpeggiations of The Money Store, as well as a move away from structurally evolving songs. The majority of these tracks are short, and often consist of Burnett’s violent, antagonistic lyrics being looped around each other in heady fashion. Opener, the hilariously titled, “You might think he loves you for your money but I know what he really loves you for it’s your brand new leopard skin pillbox hat” (a Bob Dylan reference, of all things) still features Burnett’s cranium expanding stream of consciousness rapping, but otherwise, this is Death Grips taking on the repetition of hardcore dance music more fully than they previously have. Tracks such as “Big House” even recall UK techno titans such as Regis or Surgeon; if only for brief snippets at a time.

This change up works, as they are just as noisy and difficult as ever, and the album’s electronic component is the heftiest and most adventurous to Death Grips’ name. It’s their most layered album in terms of beats, and Zach Hill’s drumming is at times even more riotous than how we remember it. “This Is Violence Now (Don’t Get Me Wrong)” is the most accessible representation of this new direction, and tracks like “Feels Like A Wheel”, and the title track follow suit in providing 2 and a half minute blasts of punishing, nose bleed worthy techno. Death Grips have never been ones for lengthy tracks, but the only two tracks here that exceed 3 minutes are the previously released “Birds”  and the epic 7 minute closing track, “Whatever I Want (Fuck Who’s Watching)”. Both of these tracks are notable for how they break the framework of the album. “Birds”, which was already confounding upon its release, is even more perplexing within context, as it’s the one track that stops to let you breathe and think about what has been happening during the previous four tracks. With its twangy, somewhat off key guitars and melding vocals (the lyrics will likely be disputed forever), it’s Death Grips taking their sound to an even less understandable level; I’d also like to point out that it’s unrealistically addictive. On the other hand, “Whatever I Want (Fuck Who’s Watching)” takes their sound to its extremes of sonic frequencies, and is even a step above the previous ones in terms of its club influences…or at least, it is until it begins trailing off into blasts of ambient feedback a minute or two in.

Overall though, Government Plates doesn’t feel any different than what we expected it to be: a Death Grips record. I’ll admit, I knew I was going to love Government Plates before I even listened to it, simply because I consider Death Grips to be one of the most important acts of this generation, and I’d be damned if I was going to change my mind about them now, after all my endless praise. As it stands now, from the first track to last I’m in heaven, and until my euphoria begins to fade, I’ll be incapable of dissecting the record any more than I already have.

1.) You might think he loves you for your money but I know what he really loves you for it’s your brand new leopard skin pillbox hat*