You are here: Home / ENTERTAINMENT / Theater Review: Every Day A Visitor 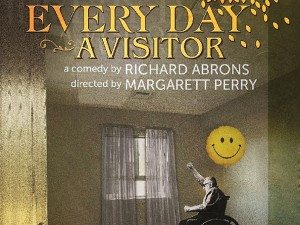 For most people, the thought of  spending their golden years in a nursing  facility brings an overwhelming sense of dread.  After all,  in such a stifling environment, there  isn’t much to do but sit around,  play cards, listen to one another complain about  the food and personal ailments (provided the hearing aids are intact) , and wait for  a knock on the door from the  man with the hooded black cloak.   For the residents of  a Jewish Nursing Home in the Bronx, there is a livelier alternative.  In Richard Abrons’ off Broadway play, Every Day a Visitor, this alternative is a world of imagination. Instead of living a painfully drab existence, these spirited seniors decide to take on personas of well known political  figures  to  “role play” themselves into a happier state of mind. While it doesn’t eliminate  their realities,  it certainly alleviates the monotony of their day to day routines. From Mayor LaGuardia to Bella Abzug, Henry Kissinger to Golda Meir,  new dialogues are  created and eventually, this all too often forgotten   sect of society is reinvigorated.

It is refreshing to see a show that both illuminates and empowers the elderly. Usually,  they  become  stereotyped and  neglected by a youth obsessed media  driven by beauty and botox. Here, we meet  older individuals who realize that, while circumstances may not change, self-perception and self-respect  can be altered. While  it seems like fortune cookie wisdom, it is a gentle reminder for young and old alike

Unlike other quality works of entertainment  that have paved paths for the aging (Recall TVs classic Golden Girls and Ron Howard’s 1985 film Cocoon)  Every Day a Visitor has a scarcity of laugh out loud moments. Yet  it succeeds in holding a continuous smile. The didactic script can sometimes feel  more like a lecture and less like a night at the theater. Perhaps  to the  great delight of these veteran actors, some of the cast  appear to be too spritely  to  be among the downtrodden and feeble.  But under Margaret Perry’s sound direction, Every Day A Vistor  takes a maudlin notion and turns it into a breezy, yet poignant piece of accessible theater.