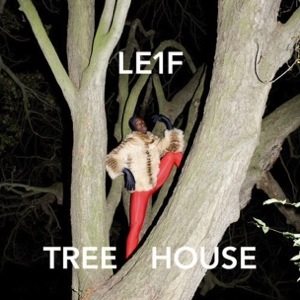 Rap music isn’t my area of expertise (I’ve let my brother cover many of the major hip-hop releases from this year), but there’s something about NYC rapper/producer Le1f that has drawn me in and affected me enough to where I’m willing to venture outside my musical comfort zone. With his two previous mixtapes, 2012’s Dark York and the even better Fly Zone, released earlier this year, Khalif Diouf has emerged as one of the more forward thinking and downright talented acts in the game. One of the reasons I have been so drawn to him — and I’m not completely sure why this is — is that when I listen to Le1f, I don’t feel like I’m listening to rap music. I mean, of course it is, but Diouf has approached his music with a keen experimental edge, and his morphing trap-flavored beats are beyond what any common rapper would be capable of working with. His voice too, which is penetratingly deep and gut melting even without being pitch shifted or autotuned, is another component to Le1f’s deliriously addictive makeup. Even when I don’t think a particular song of his is all that well written, my ears choose to view his music from an experimental perspective, and in terms of impressing up with his unique style, Le1f has yet to fall anywhere but on target.

While much of the music he has previously released is what one would call “club-ready”, here he has mostly strayed from twerk friendly hits and given us a relaxed, chill out record that focuses on a wider electronic palette. It’s Diouf showing us another playing field his music can exist on, and he succeeds, as Tree House is a breath of fresh air from the tense, fastidious beats of Fly Zone; a release that more than adequately showed off his rapping ability.

Tree House revolves around a talented array of producers, such as The Drum, FaltyDL, Boody, and Shy Guy. Their are a ton of guest spots too, and the roster feels more a part of the mixtape’s overall flow than anything Le1f has put out before. The tracks produced by Chicagoan electronic duo The-Drum are particularly lush sounding, like the bubbly, nearly balearic “Swerve”. Boody brings the mixtape their lustrous production to two of the standout cuts, “Hush BB” and “Hibiscus”, the former of which is the most sensually moving piece Le1f has ever released. While these tracks are more moderately paced than highlights from previous mixtapes, Le1f still manages to show off his immaculate flow with lightning fast verses on “Damn Son” and “Jack”, two quick ventures into the nightlife before the mixtape’s more downtrodden second half.

The highlights on the second half are more subtle; the icy and hypnotic “Free Kiki”, the hazy stream of consciousness of closer “Cry BB”. Overall though, this is a release intended to be listened to in unison, preferably with headphones. These signs all point to one thing: with Tree House, Diouf is prepping for his official full length, due sometime next year. The last two years have seen Le1f going through an incredibly exciting pre-debut stage, and he has pretty much been firing on all cylinders. While he may have originally grabbed our attention with his flamboyant persona and openly “gay” (in quotes, as he would put it) status, he has rightfully proven he’s worthy of that attention. If Dark York, Fly Zone and Tree House were just the tip of what Le1f is capable of (and I’m judging it is, seeing how inspiration seems to be in no short supply for him) than we should get ready for a true game changer come 2014.