You know you are home when you taste the love on the plate. When you walk into John Philip Greco’s second home, Philip Marie, you can feel that homey draw. You can taste the passion of the chef in each perfectly cooked muscle and shrimp that he will present to you. And if you have a palate that leans towards the sweeter side; you will find yourself a new regular spot. 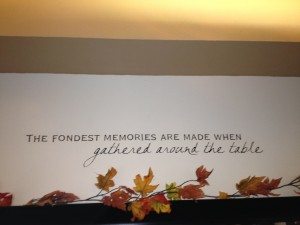 From the opening bite you can taste the sweet tilt of the meal. There was a cornbread that seemed like a cross between a bread and dessert piece. The warm, crumbling cornbread was sweet and grilled with a sweet butter sauce, but the crispy rosemary I truly enjoyed. I just needed more balance, maybe just some white pepper; and maybe something else. But none the less I did not want that level of sweetness to start out a long meal. But the crust on this bread and crisp rosemary was delicious….the rest just not as much.

Chef Grecoo officially opened up the meal with a perfectly balanced salad. Bitter arugula with sweet raisins, cranberries and currents in a warm Israeli couscous and beet salad; all dressed with bright lemon vinaigrette.  This was one of the highlights of the meal. Although there was sweetness in the dish everything was brought into balance. The bitter and sour notes sang just as loud as the sweet ones. 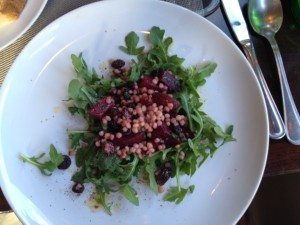 Next off was butternut squash soup with breadcrumbs. This bright orange soup was one noted and really in need of some additional flavors. Butternut squash is delicious and naturally very sweet and often needs acid and or bitterness or just something else to bring it together. The breadcrumbs did offer some salt and slight contrast in texture in the first moments that followed the food being presented; but quickly became soggy and quickly got lost. 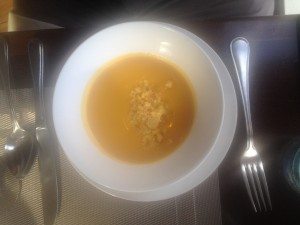 Now these are a few of my favorite things; bacon, oysters, spinach and goat cheese. The Five Eastern Roasted Oysters with crispy bacon, creamed spinach and goat cheese presented on a bead of pink Himalayan rock salts provided some of the most deliciously flavorful bites. But, if I didn’t see the oysters with my own eyes I would not have known they were there. Now this is a delicious and savory dish; but the main ingredient was hiding at the school dance like a wall flower. I would order this again, but I wouldn’t need the oysters to be there. 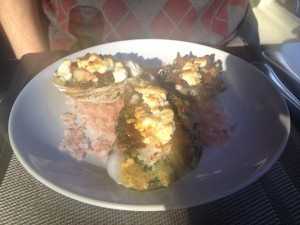 I couldn’t resist questioning the Captain Crunch crusted Mediterranean Sea Bass. I was wondering how anyone could keep this dish from turning into an odd dessert, but Chef Greco knew just how to do so. He crusted the branzino fillet with a mixture of captain crunch and panko breadcrumbs. It was served over some fresh tagliatelle with a tahini sauce and grilled fennel. The fennel and tagliatelle are delicious. I happen to love the way that fennel can transform with different heat applications. The grilling left a great char and caramelized some of the sugars in the fennel its self leaving and interesting and beautiful contrast to the sweet and tender fish. Although the tagliatelle and tahini were delicious they did not obtain the same marriage of flavor that some of the other pieces on the dish had. There was just something about the tahini that was not in line with the rest of the plate. 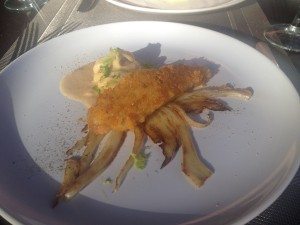 The Tuesday night clam bake. Well this is just dam good. The broth that Chef Greco creates with the chardonnay base is the perfect base to permeate the delicious and fresh seafood.  Despite the perfect cook on the shrimp and muscles, the delicious half lobster (with all the major cracking of the shell taken care of) and clams, the broth stole the show.  The dish is the Tuesday special costing $18.95, and is served with a baked potato and corn on the cob; it’s a steal. There are nightly specials served and I look forward to trying the rest of them.  Be sure to check out the other nightly specials. And this winter there will be a great deal of game meats served as the winter menu arrives. 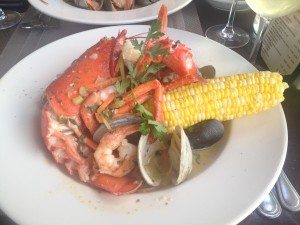 Dessert was a vanilla pound cake with spiced poached pear, grand marine sauce and fresh dense whipped cream. The pears were delicious as was the sauce but the pound cake was just there as a contrast in texture; which was nice, but honestly not needed. I would have just loved a bowl of those pears and sauce. 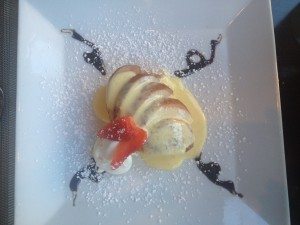 Chef Greco sat down with me for a little and shared with me some of his story. Philip Marie is the first restaurant Chef Greco opened, he also is the proud owner of 123 Burger Shot Beer, Bamboo52 Sushi Bar and Lounge and Posh Bar and Lounge. But Philip Marie is he’s first and your first always will have a special piece of your heart; and he proudly wears that piece of his heart on his sleeve as he cooks here.  He has a sweet tooth; if you do too, this is where you need to eat. The restaurant opened when John Philip and his wife Suzanne Marie Greco returned from their honeymoon and decided to go all in and sell everything they owned to opened up 16 years ago here in Manhattan; the restaurant turn over capital of the world. But with great effort the husband/wife team opened up their New American restaurant and they have been in the same place (where every other restaurant but one has come and gone) since 1998. This is a quality place that you can feel the warmth from the leadership to the table staff. It was a pleasure dining under Chef Greco’s guidance.