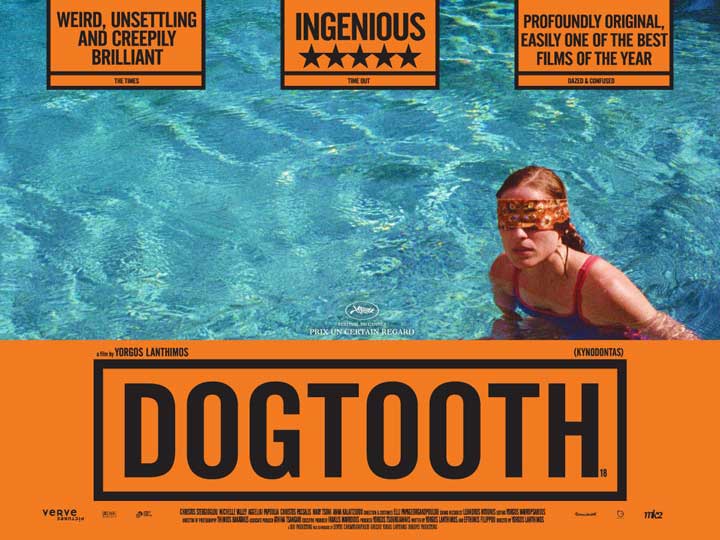 Dogtooth is a movie I’ve wanted to write about for quite some time for my Netflix’d column, but it’s just I previously hadn’t been able to think of precisely the right way to explicate on the film. It’s one of my favorite movies of the last few years, and a film I find so rich in thematic material, yet when ever I’d find myself trying to do a write-up on the film I’d usually find myself simply coming up with two or three blase sentences, shrugging, and then deciding it was a fool’s errand and simply giving up on it. I feel that most people that have seen the film will also attribute that it’s certainly not an easy work to cover, especially from one who can hardly be called a film scholar (it really hurt for me to say that), and besides there are countless other critiques and essays on Dogtooth littered throughout the internet that probably elaborate on the film better than any 900-word piece I could fart out. Still, there was a nagging feeling this whole time in my head, and it was simply this: I don’t think I could ever do this critic shit professionally if I can call a film review-proof! Therefore, after quite an extended period of brain storming (I originally hoped to have this post be a seasonal one for Halloween), I think I’ve finally found the satisfying means to review Dogtooth, and just in time for the holidays too! Feel free to read this piece as my Christmas recommendation…moving on then.

Dogtooth is the second feature length film from Greek director Yorgos Lanthimos. The film follows a rather peculiar case of a married couple that has kept their three children (a son and two daughters, now in their 20s) isolated from the outside world, and through various unusual methods. Not only do they not allow their children to leave the premises of their compound home, but they also educate their children with false information and answer their questions about life that we as viewers know to be completely absurd and false. One outside factor that visits the couple’s offspring, however, is a woman named Christina who is brought in to have sex with the son. Christina, however, soon tires of having sex with this literal man-child, and then seeks out the oldest daughter and offers her gifts for sexual favors. Initially Christina’s gifts start out innocent enough, such as a headband, but eventually she brings the daughter video tapes of Hollywood movies. This finally gives her exposure to the world that is outside her living conditions, and this results in strange behavior from both the children of this family, and their bizarre parents.

Sounds pretty fucked up, eh? As you can guess from the synopsis, Dogtooth is a boundary pushing film that’s not exactly trying to make a clear-cut statement. Lanthimos’ style definitely recalls the early work of directors like David Cronenberg or Michael Haneke, in that the film is often disturbing, yet also always cerebral and dense. For this review I won’t go too deeply into the film’s meaning, as I feel half the film’s merit is allowing viewers to cement their own thoughts on it. I will say that the plethora of interpretations I’ve read all seem valid for the most part, and the film’s most ostensible theme, on the futility to escape society in this day and age, is the ideal adhesive to carry the film’s other troubling topics.

The film’s craft, however, speaks volumes for it’s quality, even if the film’s messages elude you. The film’s tone is suitably gritty, but it’s also very humorous too. The mannerisms on the characters are highly exaggerated, and it’s clear that realism isn’t a primary concern here. Some of the best scenes in the film come when we see the three children re-enacting scenes from popular American movies, such as Jaws, Rocky, and Flashdance. In fact, these light-hearted moments make the film’s more intense scenes all the more unexpected, and disquieting. The film has several scenes of rash brutality to it, which find us seeing these characters performing some truly unspeakable acts on one another, and even to themselves. Still, Lanthimos knows when to pull back, and none of the bloody scenes in the film last very long. Lanthimos even winks at us that some of this violence is meant to be schlocky, rather than shocking. It’s a film that walks a tight-rope between ostentatious art, and playful b-movie theatrics, but it will certainly impress anyone to see how nimbly it moves between these two counterpoints.

So in the end, I wrote a review that was as brief and to the point as possible, as I feel it’s a film that speak more for itself than some silly long essay could. Very few films I’ve seen (even European ones) are as wickedly funny, perverse, dense and mercilessly thought-provoking in equal measures as Lanthimos’ film is, and it’s very likely that this film will act as the blueprint for the rest of his filmography. Hell, his second film Alps’ (which is pretty damn good in it’s own right) most noted criticism was that it was too similar to Dogtooth, which the director has pointed out was more or less intentional. Still, who could really blame someone for trying to replicate this stroke of twisted genius. It’s not for everyone, but this is contemporary art cinema at it’s most original,  and varied.