You are here: Home / ENTERTAINMENT / “Her” Review- Ain’t she a beaut’? 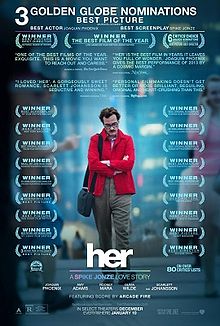 At the relatively young age of 44, one could seriously make a case that Spike Jonze (born Adam Spiegel) has done more in his career than most film makers over 70 could ever have hoped to achieve. Starting out as a sought after music video director for his engaging contributions to musicians like the Beastie Boys and Fatboy Slim,  he went on to achieve great acclaim for directing Charlie Kaufman’s brilliant screenplays (Being John Malkovitch and Adaptation). He then would go on to co-create MTV’s massively popular TV series Jackass, and then take on the honor of being the first film maker to bring Maurice Sendak’s beloved Where the Wild Things Are to the big screen. An immense resume for sure, but there was perhaps one area Spike Jonze remained untested in: screenplay writing. All of his feature films had been penned by renowned names in the field (although he did have a co-writing credit on Where the Wild Things Are), but that didn’t keep us from pondering if this singular visual stylist could also be a great storyteller. Now, Spike Jonze has giving us a film, Her, that is written by him, as well as directed, and his full talents of an artist are more clear-and-present then ever in it. Her is a great film in every regard, and neck-to-neck with Before Midnight for 2013’s best film.

Her is a love story, and science-fiction tale that manages to be equally adept at both. Set in a near-future Los Angeles, it focuses on Theodore Twombly (Joaquin Phoenix), a highly intelligent yet introverted writer, who is under a great depression. He’s been seperated from his wife Catherine (Rooney Mara) for almost a year now, and it appears that their divorce is all but imminent. Drudging through life with a continued sense of melancholy, Theodore finally receives a ray of hope when he discovers a new technology that allow AI-automated Operational Systems to communicate with humans. After filling out a questionnaire, he forms the female AI known as Samantha, and the two quickly form a bond that turns into romance.

The idea of man falling in love with machine is certainly a sci-fi trope that’s been used for generations now, but Her still feels immediately fresh. Jonze vision of the future is both inherent to his style, as well as perfectly plausible in light of the way things currently look. Throughout the film we see futuristic interpretations of how we’ll read our email, listen to music (“put on a melancholy song.”) and play video games. These interpretations are often hilarious (Amy Adams character is programming a video game where the objective is to be the best mom ever!), and always whimsical and completely organic. It’s a vision that would make Philip K. Dick proud, and George Orwell reassess what a dystopia actually is. Add in a fantastic score from indie-rock gods Arcade Fire, and you have the most distinct and appealing vision of the future in a very long. 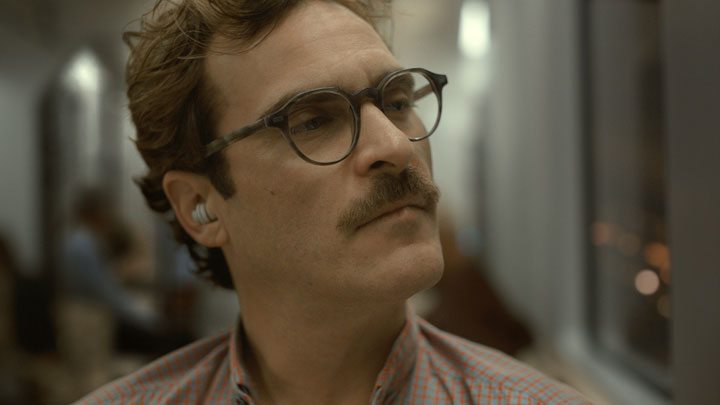 Perhaps of even more importance to Her’s quality, however, is that the film’s face is so human. Theodore and Samantha’s relationship grows more complex throughout the film, especially when they start to realize how doomed it all is, but they still go through things that regular couples do. They argue about things that seem huge at the moment, yet petty in retrospect, as well as experiment with new scenarios to show their appreciation. The interactions that Theodore and Sam have tend to be sexy, endearing, and ultimately heartbreaking. Her is a resounding example of how powerful the science-fiction genre can be, when handled with proper care, and a proper focus on reality. Because of this, I can easily say that Her has one of the most bittersweet and effective endings in recent American cinema.

The one area of Her that’s the most dicey, however, actually stems from the film’s delivery of subtext. Don’t get me wrong, Spike Jonze is a brilliant director, and he and cinematographer Hoyte van Hoytema always make the film a pleasure to look at. It’s just…it’s no secret as to why Theodore dresses like a walking, talking Valentine’s Day card. Spike Jonze isn’t exactly the most subtle when it comes to visual cues with several shots coming off as fully blatant in their intended reading (one scene that comes to mind is a shot where a particularly distraught Theodore sits in front of a large video-screen as a falcon swoops down upon his figure), the film is just so pretty and majestic that it’s hard to complain if the film’s subtext is too obvious. After-all, this is a movie that is trying to communicate directly with contemporary audiences about how the line between romance and technology is becoming continuously blurred, so it doesn’t exactly hurt that the film is more honest than suggestive.

Her also probably has the best cast of the year (with all respect to American Hustle), and not just because of the two Oscar-worthy performances that are the center-pieces to the love story. Phoenix once again delivers a flawless performance that also seems to be exactly what his career had been building up to at this point. In recent years the actor has often been cast as a tortured romantic, and it’s easy to see why, as he has the perfect balance for making his characters sweet, flawed and fully human as well, and it’s unbelievable the chemistry that he has with Scarlett Johansen’s voice. It’s already been widely publicized that Spike Jonze recast the role of Samantha after he found that Samantha Morton’s original voice over wasn’t quite working during the editing process, but it’s very plausible to think that it only took a few line readings to convince Jonze that Johansen would be the ideal replacement. The young actress is perfectly soulful as this humanized machine, and it’s really hard to imagine that Phoenix couldn’t have listened to her performance at all during the filming. Another standout comes from the wonderful Amy Adams, proving once again that there’s little she can’t do, here playing the frizzy-haired…Amy, Theodore’s confiding friend and platonic soul-mate. Clever casting for the bit parts too, such as Kristin Wigg as a phone sex date and the lovable Chris Pratt as Theodore’s spirited boss, only contemplate the experience, and let viewers know that they’re really watching a movie that might very well have everything in it.

During the ending credits for Her, there’s a section that reads that the film is dedicated to the memories of James Gandolfini, Maurice Sendak, Harris Savides and Adam Yaunch. All four of these men had worked with Jonze over his career, and it really says something about how widespread his work has been if he’s worked with both Tony Soprano and MCA of The Beastie Boys during his relatively brief directorial career. Her is undoubtedly a culmination and destination point for the director, and you can tell that it’s the sort of film he’s waited his whole lifetime to bring to life. Here’s hoping that this film will act as a sort of a rebirth for Jonze, and that he will only continue to put out works of pop-art that only grow more marvelous. 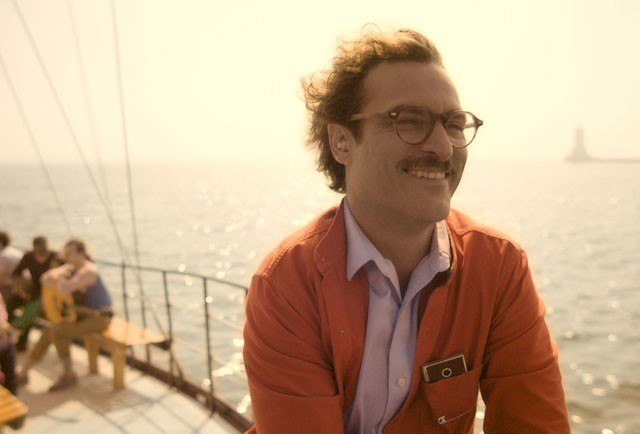