In 1960, an aspiring would be teacher walked into record producer Don Kirschner’s office at 1650 Broadway and turned  herself into one of pop’s music biggest songwriters. This precocious 17 year from Brooklyn was Carol Joan Klein, who later became the legendary Carole King. Ms. King’s life tale is unfolding nightly at Broadway’s Stephen Sondheim theatre in the mostly entertaining, occasionally schmaltzy, biographical “Beautiful: The Carole King Musical.”

King is best known for her 1971 album Tapestry, for which she was awarded Grammys for album, record, and song of the year. Yet before this seminal recording, she wrote feel good pop hits with husband and co-writer Gerry Goffin including “Take Good Care of My Baby”, “One Fine Day”, “Up On The Roof”, “The Loco-motion”, and “Will You Love Me Tomorrow.”

Doug McGrath’s book weaves the story of King’s younger days with energetic slick musical numbers by those who made them famous (The Drifters, The Shirelles, and Little Eva). Married at the age of 17 to Goffin, King’s uphill battle with his wandering eye, manic depressive behavior, and substance abuse ultimately led to their divorce in 1968.I certainly don’t wish to minimize the personal turmoil that a troubled marriage can cause, but one has to question whether or not that singular issue of a biographical piece can sustain an entire production. Luckily, there are more than enough winning performances to compensate.

Jessie Mueller’s take on Carole King is stunning. While she doesn’t impersonate her subject, she evokes all of her warmth and heartache. Mueller splashed onto the Broadway scene in the otherwise forgettable revival of  On a Clear Day You Can See Forever  in 2011 and scored a Tony nomination for her role as the  jazz singer. Tony voters would be wise to take note of her star-turn portrayal of an artist whose vulnerability and quiet strength have given us timeless classics and inspired countless singer-songwriters. Jake Epstein does a fine job of balancing Goffin’s neuroses and womanizing into a still sympathetic, conflicted soul. Anika Larsen and Jarrod Spector are top notch as Cynthia Weil and Barry Mann (respectively). Weil and Mann were friendly rivals to Goffin and King during their early songwriting years and penned  the chart toppers “On Broadway”, “You’ve Lost that Lovin’ Feeling”, and “Walking in the Rain”, all of which are performed by a  high-octane ensemble.

It is a curious observation that the show  has been billed as “The Carole King Musical”, as much of its content features a broad overview of the 1650 Broadway/Brill Building era of songwriting. The “1650 Broadway Medley”  near the top of  Act 1, is a cleverly staged look at the days when songs were cranked out like cars on an assembly line. Upon hearing “Be-Bop- A- Lula” for the first time, Producer Kirschner (played with a fine blend of rakishness and charm by Jeb Brown),  interrupts mid-way through the  song and asks, “Is the rest of it like this? Just the same few notes over and over with lyrics that a dolphin could write?” He then applauds and exclaims, “I’ll take it! That’s very popular right now!” Indeed. Songs of that ilk were the rage back then and Beautiful has no shortage of them. Steve Sidwell’s sharp orchestrations and musical arrangements maintain the integrity of the original recordings and complement a masterful cast.Derek McLane’s scenic work is smartly designed and Alejo Vietti’s costumes are “sixties trendy” and fashionably appropriate. Combined, these elements will leave audiences with a smile on their faces and fond musical memories. While many other jukebox musicals tend towards banality and blandness, Beautiful is fun to watch, easy on the ears, and it  might just (oh dear reader, I simply can’t resist)–make the “earth move under your feet.”

Beautiful: The Carole King Musical is now playing at the Stephen Sondheim Theater, 124 West 43rd Street between 6th avenue  and Broadway; Tickets are available by phone at  212-239-6200, telecharge.com, or at the box office. 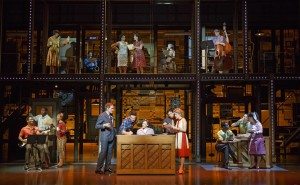