You are here: Home / ENTERTAINMENT / ARTS / Theater Review: “Hamlet” and “Rosencrantz and Guildenstern Are Dead”

“Speak the speech, I pray you, as I pronounced it to you, trippingly on the tongue.”  This request, spoken by Hamlet (to a group of players) in Act 3, Scene 2 of William Shakespeare’s tragedy, is a plea for clarity and authenticity. After all, the acting troupe is about to perform a play in front of Hamlet’s step-father, Claudius,  and his mother, Gertrude. So why is there such  urgency in the appeal?  Hamlet hopes that the play will shatter the consciousness of Claudius, who has murdered Hamlet’s father in order to gain control of the throne. This appeal continues, as he elaborates on how actors should deliver lines.  I would suspect that Ian Belknap gave his highly competent cast similar advice during the rehearsals for The Acting Company’s touring production of Hamlet, now enjoying a brief residency through February 1st at The Pearl Theatre.

To address the genius of William Shakespeare is analogous to pointing out the color of the sky. Throngs of scholars, educators, historians, and fans have spent years dissecting and debating the penultimate playwright  since he  burst onto the literary landscape of 16th century England.  Although his works are performed often, it is a rare occurrence when they are done at the level of vibrancy displayed here.  As I sat watching and listening, I was reminded of Shakespeare’s eloquent insight on the human condition. Centuries have passed and yet we are the same mortal creatures who suffer grief, loss, rage, guilt, heartache, jealousy, revenge, rage, and possibly madness.  It is a blessing that such weighty emotional material is receiving such a  comprehensible and engaging treatment.

John Skelley’s interpretation of the troubled Danish Prince is personalized and accomplished.  His delivery of the language, especially in the pivotal and often quoted monologues, breathes fresh life to the text, as though you were listening to the woes of a contemporary friend. Andy Nogasky’s yammering, but wise Polonius (Chief Counsel to the throne)  proves affable and charming and Jacquline Correa  creates an exquisitely regal Gertrude- aside from her silver glittered, chunky high- heels. On RuPaul’s Drag Race, they would give other “queens” reason to exalt her majesty. But In Elizabethan era Denmark?  Methinks not. Candice Donnelly’s costumes, for the most part, lack aristocratic propriety. Neil Patel’s scenic design offers understated simplicity. All of the action occurs in a neutral, abbey-like setting but still suggests royalty and nobility.

Two normally “forgotten” characters in Shakespeare’s masterpiece are claiming the spotlight with linguistic aplomb. Not necessarily in this production of Hamlet, but in The Acting Company’s production of Rosencrantz and Guildenstern Are Dead, which in playing in repertory with Hamlet at the Pearl Theater.

Tom Stoppard’s 1966 comic tragedy is a wholly original view from the minds of two minor players from Shakespeare’s Hamlet. Rosencrantz (Grant Fletcher Prewitt) and Guildenstern (Ian Gould) are two schoolmates of the troubled prince who take instruction from Claudius and Gertrude to spy on him and discern whether of not their friend is truly mad. In Stoppard’s piece, the two question their mission, each other, themselves, and nearly the meaning of every word that each of them speak. Along the way, they pantomime characters from Hamlet and the play is interspersed with actual scenes from it. Life’s meaning, monotony, and existence is pondered amidst double entendres, verbal jousting, and wry British humor.

To be honest, it is not one of my favorite plays. Having studied it in college and being familiar with college productions,  I found that it crossed into levels of pretension. Under director John Rando’s hand, Stoppard’s critically regarded piece is pensive, lively, and very funny. Prewitt and Gould handle the complex wordplay with flair and their onstage chemistry is a joy to watch. The remaining company supports the two as they double as a flamboyant acting troupe and actual characters from Hamlet.

The Acting Company should stand up and take a bow, for they are continuing the tradition of bringing classic theater to a broad audience. Their mission of arts education to under-served communities is inspiring and vital. Founded in 1972 by John Houseman, they have received numerous awards, including a TONY for Excellence in Theater.   New Yorkers seeking high-quality, classic theater should rush  to the Pearl Theater while the company is still in town through February 1st. Certain performances are already sold out, so get thee to the box office soon.

Hamlet and Rosencrantz and Guildenstern are Dead, presented by The Acting Company at the Pearl Theater Company, 555 W. 42nd street between 10th and 11th avenue. Tickets available at the box office, online at www.pearltheatre.org  or by phone: 212.563.9261. Performances vary. 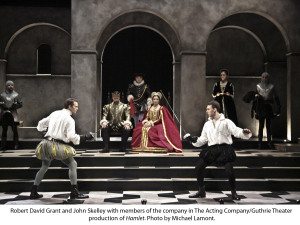