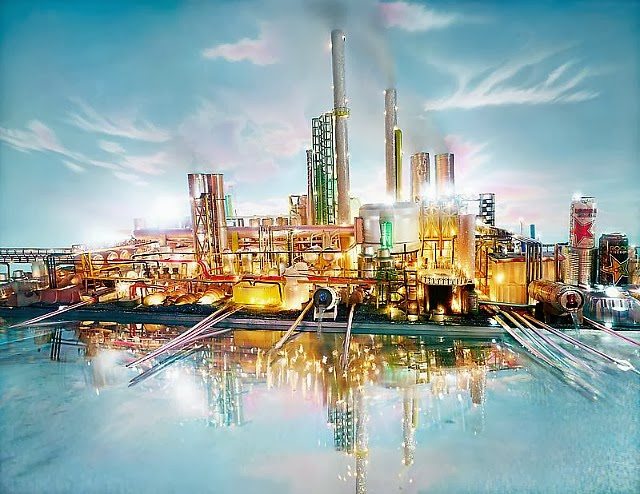 The Paul Kasmin Gallery on Tenth Ave. in Chelsea is now hosting LAND SCAPE, an exhibition of new photographs by David LaChapelle. The exhibition opened last Friday, and runs until March 1st.

LAND SCAPE is comprised of two series: Refineries and Gas Stations, both of which serve as commentaries on the social and environmental consequences of a petroleum-fueled consumer society. The photos are taken from handcrafted scaled models of Big Oil’s industrial infrastructure—complete with cardboard, hair curlers, egg cartons, straws, pens, cans, and other bits of found and recycled materials. In viewing this architecture of junk the connection between peak oil, the continuous production of garbage, and humanity’s growing ecological footprint is exposed.

The Refineries series draws the viewer in with its captivating otherworldliness, while simultaneously evoking a feeling of disgust—most likely at the synthetic and destructive nature of consumerism. Take for example, the image of a blue energy drink guzzling out of a refinery into the water supply. The juxtaposition of industrial oil infrastructure with household objects makes it strikingly clear that the things we buy and consume are founded upon an unsustainable oil dependency.

A pen viewed in a LaChapelle photo is no longer an innocent writing device—it takes on a number of social, environmental, and ethical concerns. By seeing the pen as part of an oil refinery, we are drawn to consider the impact of our own consumerism. We must begin to ask ourselves, how did this object get before me? What materials went in to making it? How much greenhouse gases were emitted through its transportation? What are the ecological consequences of me buying pens in the future? 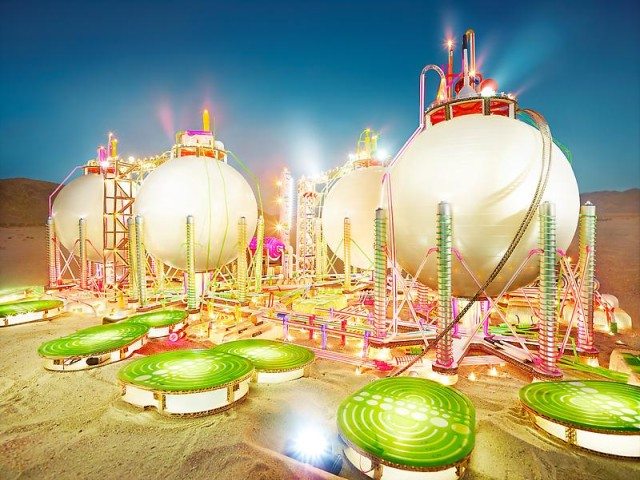 The Gas Station series was shot in the rainforest of Maui. The lighting in these photos is surreal and disturbing—drawing out tensions between the plant life and fueling stations. The organic material seems to be slowly overtaking the man-made structures, while at the same time representing the very source of our fuel addiction. 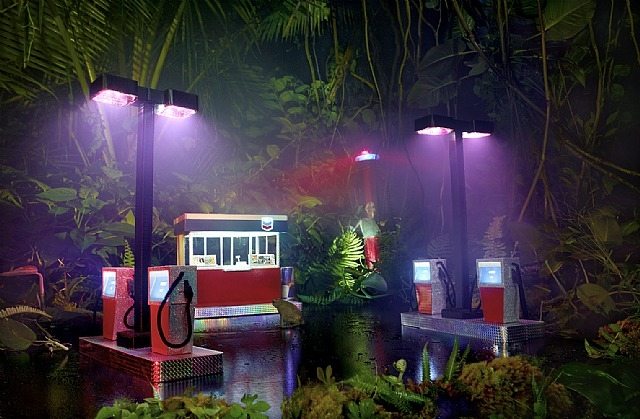 Before breaking out in the world of fine-art photography, LaChapelle cut his teeth as a commercial photographer. His first job as a photographer was at Interview magazine, at the request of Andy Warhol. He has shot for The New York Times Magazine, Rolling Stone, The Face, Vanity Fair, Vogue Italia, and Vogue Paris. In 1995 he shot the famous “kissing sailors” piece for Diesel, which was one of the first public advertisements depicting homosexual kissing. His earlier photos of celebrities and models (the kind with long legs, not the kind you build) have a glam “Barbie world” affect—a synthetic quality that also runs through his current work. LaChapelle seems to have even physically taken on the aesthetic of his photos…let’s just say that he looks way too young for 50.

The opening looked something like a hybrid between Zoolander and a Fellini film—a circus of rooms packed with attractive people hobnobbing, trying to get a shot with the artist, a few kooks dressed like Final Fantasy characters, representatives from the contemporary art intelligentsia stroking their chins, and a sprinkling of celebrity (such as transgender model Amanda Lenore).

Of course, most art openings have an element of superficiality—this scene is nothing new. LaChappele’s work is interesting in that it seems to embrace superficiality and artificiality (whether in the art world, the media, or in consumer trends) in order to turn these ideas around, and pose interesting questions about society and the world we live in.

LAND SCAPE is an exhibition that makes you think about things that are easy to sweep under the rug. It offers a hallucinatory glimpse at the consequences of our consumption and disregard for natural resources as a society, while offering stunning visual imagery and craftsmanship to wrap your head around.