You are here: Home / OPINION / Things We Can Learn from the Kink Community: Consent 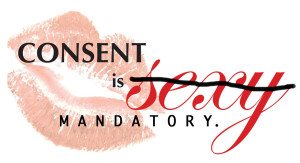 The other night, I was at a nice little gay bar, and this one guy was pretty drunk. As in, the boy was screaming everything and at one point fell off his chair. Later in the evening, an older man sidled up to him and almost knocked everyone else out of the way to creep all over this guy. Pretty standard, right? But why should it be? Why do we see this and think it’s totally fine for older men to get really creepy with younger, drunk gay men? And this brings up the first general rule that I’ve learned from the kink community.

Consent. Always get consent. Even for touching a stranger, you get consent. I’m sure we can all think of situations where this might not apply, or its “clear” that the other person has consented, but I’m not going to mince words here. Get consent before doing anything that might violate another person’s personal space.

Are you at a party? Are people taking their clothes off? Well, ask the dude before you grab his ass/dick. We really shouldn’t have to be going over this. Sure you can say that YOU wouldn’t mind having someone sexy grab you, but maybe that person isn’t sexy. We’ve all been there, in some way. This seemingly becomes less clear at a bar, though I’d expect the opposite.  This usually has a mix of flirting, booze, and the beginning of bad decisions. Still, just because he’s drunk, doesn’t mean you should be grabbing him. The really sad thing is that, here, you can’t always count on your friends to take care of you, should you be there with them.  Half the time, it’s because they’re drunk, too. Others, it’s because it’s considered to be standard practice, and we lived through it, so that guy will totally be ok.

Let’s also be extremely clear on a part of this. Women in gay bars must consent, as well. This means no grabbing someone’s tits or feeling them up or anything that even involves touching their body. No, it’s not ok because you aren’t into women. It’s not ok, period.

My experiences with the kink community have opened my eyes to many practices that I feel our community doesn’t understand. I would say that the most important, and easiest to understand is giving consent. It might not seem like that big of a deal, but I’ve been in, and seen, plenty of situations that have made me feel extremely uncomfortable, but at the time, I simply dismissed them as it’s just a part of being gay. I realize now that it’s not. We can do better.