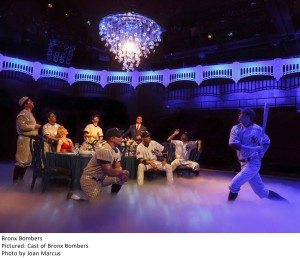 “The first year I played, says Lou Gehrig (John Wernke), I was sent a contract for three thousand dollars. Me, my ma and dad, were poor our whole lives. We were grateful.”  “We’re never not grateful. In this house at least,” replies Carmen Berra (Tracy Shayne) , wife of the legendary New York Yankees icon Yogi Berra (Peter Scolari). This meaningful exchange plays out during an imagined dinner party near the top of Act 2 in playwright Eric Simonson’s Bronx Bombers.  It is one of the many reflective moments in this nostalgic trip which celebrates Major League Baseball’s most successful team in history: the New York Yankees.

Simonson is best known for his prior sports related works, Lombardi and Magic/Bird  both of which idolized their subjects for their greatness and inspiration. Bronx Bombers continues in this vein by spotlighting players from the past and present-athletes whose immense statures made them household names. And while he manages to maintain their “larger than life” heroic personas, he humanely crafts them as men of depth, integrity, and gratitude—characteristics which are  foreign concepts to contemporary players more intent on breaking records for their demands and contracts rather than playing for the love of the game.

Act 1 opens in a hotel room in Boston where Coach Yogi Berra and catcher Thurman Munson (Bill Dawes) are trying to mediate a contentious argument between right fielder Reggie Jackson (Francois Battiste)  and manager Billy Martin (Keith Nobbs). On June 18th 1977, Martin replaced Jackson after a confrontation in the dugout of  Fenway park. Their interaction plods along and, aside from Battiste’s wonderfully cocksure portrayal of Jackson, there is very little dramatic tension. Actually, the dramatic tension is lacking throughout Bronx Bombers.  Yet the second act provides a fun and thoughtful glimpse into the men who “lived” in “the house that Babe Ruth built”. Here, they are all gathered for a fantasy reunion at Yogi and Carmen’s home where memories and reflections dominate the conversation. C.J. Wilson is marvelous as the gruff, but charming Ruth.  Wernke brings sincerity and heart to Lou Gehrig,  Chris Henry Coffey serves a confidently cool Joe DiMaggio, and Christopher Jackson is serviceable and  as shortstop Derek Jeter. Real life newlyweds Scolari and Shayne round out the cast with sweet, mid-western warmth as Mr. and Mrs. Berra (both of whom were from St. Louis, MO). Like  like any successful team, Bronx Bombers  is an ensemble piece that is sure to please die-hard fans and casual spectators alike.  Although it is considered America’s pastime, baseball has never resonated with me. Yet Bronx Bombers reaches past the sports lingo and taps into the heart of what truly matters: teamwork, humility, respect, and love. It is more than a love letter to baseball-It is a testament to the incredible city of New York.

Bronx Bombers  is now playing on Broadway  at Circle in the Square (W. 50th between Broadway and Eighth Avenue). For tickets, visit www.telecharge.com, call 212.239.6200 or visit the box office.