You are here: Home / ENTERTAINMENT / ARTS / Theater Review: “My Mother Has 4 Noses” 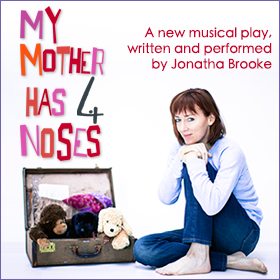 My Mother Has 4 Noses.  It’s not exactly a title producers would endorse  if they are banking on a box office theatrical smash. Yet it certainly invites (and rightfully receives)  raised brows of curiosity. This autobiographical “play with music” delves into the often overlooked, but much needed  area  of caregiving. And it is a gem worth seeing.

Singer-songwriter Jonatha Brooke  elaborates on the offbeat title and bares her soul in this one woman vehicle, now playing at the Duke Theater on 42nd St.  Brooke, who was one half of the duo, the Story, is a successful artist whose life took a much unexpected turn in 2010 when her mother began suffering from dementia. Her mother’s eccentricities were nothing out of the ordinary. As a christian scientist, Mother Brooke shunned modern medicine, ignoring a cancerous growth which consequently led to having a portion of her face removed. Thus, the nose prosthetics. As a larger than life personality, mother Brooke attempted to compensate by dressing in full clown regalia for her  then junior high school-aged Jonatha; the nightmare of every adolescent fully realized.  Still, her mother’s deeply perceptive and quirky musings (particularly her published poetry).  shaped her daughter’s work as a musician and drew them closer together towards the inevitable end of mom’s life.

Brooke’s songs are hauntingly gorgeous, backed minimally by Ben Butler (guitarist), and Anja Wood (Cello). Yet sometimes, they seem so lyrically arcane that it is difficult for them to propel the story forward.  Still, Brooke has taken her mother’s advice of “getting this down” by  sharing her intimate story. No stone is left unturned either.  As Brooke describes, in full detail, the challenges faced by her mother of everyday bodily functions, there is an uncomfortable aura felt by the audience.  I applaud her for the bravery in this because it depicts life on an unconditional level. Most love stories, whether familial or romantic, ignore the unpleasantries and ugliness of love. Here, she  places it all on the table with unflinching courage and unedited heart.

As I meandered through the lobby after the show, Ms. Brooke came out to meet her fans. From two different ladies, I heard words of thanks. They had experienced the same struggles Brooke did with their own mothers. I was already a fan, but the compliments magnified how strongly this show resonates with audiences. It is a human story of sacrifice and compassion that should not be missed.