You are here: Home / ENTERTAINMENT / ARTS / Award-Winning Literature Comes From Behind Bars 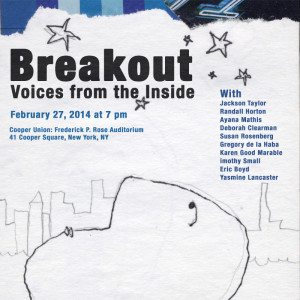 The PEN Prison Writing Program has been bringing the power of words to inmates for over forty years. Led by dedicated mentors with workshops exploring nonfiction and poetry alike, the program provides free Handbooks for Writers in Prison so that they can explore a craft that may provide an escape even from behind bars. Each year, inmates in the program can submit their works to PEN’s Prison Writing Contest. Eligible contestants must be “incarcerated in federal, state, or county prison” prior to the submission deadline, as outlined in the PEN American Center’s guidelines. Prizes range from $50 to $200 in the categories of poetry, fiction, drama, and nonfiction.

A reading of the 2014 contest-winning poetry and prose took place on February 27th at The Cooper Union in Manhattan’s Cooper Square. Open to the public and free of charge, the reading featured works from prisoners across the country. Every last piece not only inspired and awed with crisp description and striking nouns, but also with technical prowess. In other words, line breaks and meter that one only hopes to find in the most accomplished college (or graduate) student’s work adorned the inmates’ pages with beautiful sincerity.

The night’s readers (of course, not the prisoners themselves) sat on stage in a semi-circle, ascending to the microphone when it was their turn to read a piece from one of this year’s winners. A varied demographic, the readers included PEN employees and the formerly incarcerated. One such employee, the prison writing program’s mentorship coordinator, Timothy Small, even read a work of his own. Small’s piece, “Return to Sender,” detailed his duties as the coordinator before delving into a chilling and real scenario.

What starts out as list of menial tasks (“cutting through adhesive seals, deciphering all styles of penmanship, scanning letters for key words, and entering addresses into spreadsheets”) comes to tell the story of a 2013 PEN Prison Writing Contest winner, whose date of lethal injection prevented him from seeing his congratulatory letter for second place, fiction. The most harrowing part of the story, one could argue, was that letter was “returned to sender” five, whole days before William Van Poyck, the award-winning author, was scheduled to die.

Poyck’s fictional piece contained unsettling descriptions of incarceration marked by inspired prose. “The maximum-security prison was a depraved place, a hermetic kingdom of the damned, haunted by its own terrible spirit,” he wrote. For the rest of the piece that won second place for fiction in 2013, read “Death by Dominoes.”

Though PEN has yet to name to officially name this year’s winners, the rest of the works from 2013 are open for readership online. Awarded first place in poetry in last year’s contest, Joe Rickey Knight’s “Midnight at the Manatee” uses no extraneous words to detail a memory “for Dad.” You can read Knight’s winning piece here, as everyone who attended the reading on the 27th had the pleasure of hearing it spoken aloud.

When the reading was done, many lingered in the Rose Auditorium, picking up pamphlets for donation or even purchasing literature available for sale by inmates. What everyone heard that night will probably not only linger in their minds, but it will also make them think differently about the separation between those who live behind bars and those who are free.