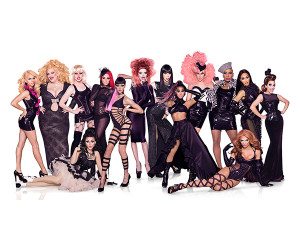 The queens come into the workroom, with lots of screaming and squealing. Gia opens her mouth and, of course, we all want to slap her. April feels that she’s gotten a wake –up call. Gia is stripping and flailing and Bianca wonders if we’re in a White Snake video. Gia has some words to say, which we can’t understand since she’s putting on a thick accent. Bianca says “she’s a fish, but she’s going to be floating on top. Dead.”

Shemail! We get a bunch of musical references. Ian Drew from US Weekly is the judge for the mini challenge. There will be extreme close ups of celebrities, and the queens will have to decide if they are female or she-male. Ben and Adore win, though I don’t think there were any real rules, because I just got really confused.

The main challenge is to separate into two groups and perform “Shade: the Rusical” a new musical extravaganza. Adore and Ben get to choose their teams, and for the most part, it’s who you’d expect (though Adore choses Milk, showing that she’s not completely stupid). Trinity gets chosen last, and doesn’t understand why.

On Ben’s team, Courtney is going to play the ingénue, because, well, she’s the most ingénue of the group. Trinity wants to play it safe and is already over this challenge, and we’re over that attitude. Adore seems to be American Idol vocal gymnasticing all over her rehearsal, which is something I can’t stand. Laganja is overly dramatic, but we’ve quickly come to expect her to HAVE to be the prettiest girl at the ball. Adore thinks that he’s more Courtney Love than anything else. Ok, let’s take a moment. I’m not a huge Courtney Love fan, but get real, kid. Moving on. April is given the “Big Girl” part, and is just happy to not be the butch one, again. Milk thinks that Gia’s voice is super annoying. Darienne, who’s sitting next to Gia, says the same thing but with more words.

Ru comes to see the dolls. Courtney is working on her whistle tones. Trinity talks about how she hasn’t acted since high school. Someone, probably Bianca, says “and she played a tree.” Ru informs everyone that they have to work together, but still stand out. On the other team, Adore is playing the bad girl, because she’s the team leader. Joslyn is going to give the butch queen her best shot, and claims to be getting inspiration from Bianca (I love that Joslyn is smarter than she lets on). The main stage will be Tony Award Glamour.

The queens head to the main-stage for dance rehearsal. Courtney’s done musical theater in the past (because, duh). Composer and producer and former judge Lucian Piane, his sister (Wikipedia is failing me at the moment), and Our Lady J are there. Courtney’s holding back a little. Gia doesn’t get the jokes, which is bad, since she’s supposed to be one of the comedy queens. Bianca and Trinity go over the choreography, but Trinity can’t get the moves down. Trinity has a lot of issues and Bianca is looking through her purse for food to hide from the other survivors when this act finally crashes.

Adore is also holding back, and Lucian can see the fear in her eyes. Joslyn has a very distinctive voice, and April is behind on the music. She, however, is positive, and gives us one of the best lines since Casanova’s fish in water line. She can’t be a “downward Debbie,” and I need to figure out how to work this into a show. Back in the workroom, Gia thinks that Trinity is way too uptight and needs to get laid. Trinity, however, can’t get her steps right and blames everyone else.

The other team comes in, and they get ready for the production. Laganja is bouncing off the walls, and Gia has no idea what a Tony is. Courtney talks about how she tried out for Australian Idol as a boy, didn’t get in, and then tried out as a drag queen, and became the first out Idol contestant. Adore feels the need to talk about how he was told to butch it up for Idol, but he’s in a season no one cares about. Gia stuns us with having developed a personality while no one was looking and reveals her history of starting her career at five in Kabuki Theater, which has no female actors.

Ru opens the main stage in a knock out fringe dress and names Michelle and Santino “Breast Side Story” and “Book of Morons.” Lucian, dripping with feigned excitement, informs us that we’re in for a treat. Sheryl Lee Ralph rounds out the judges.

First act. Ben is the narrator. Courtney opens up belting, and damn, she’s good. Courtney can’t decide between being a pageant queen or a comedy queen before Ben, dressed as if Fran Drescher’s grandmother was a She-Ra villain, gives her some fish oil, turning her into a shady queen.

Second act. Adore is trying to back-phrase and is failing. The others are a trio of “Supremes” (Diana Ross and… not American Horror Story). The Supremes are off and then there is dancing. After Adore falls to the floor, Milk Grisabellas her way over Adore’s body, and into our hearts. There’s a big Rent style ending, and applause.

We get an incredibly quick runway, where the queens line up, which saddens me, because I wanted to see some of the dresses. Bianca, Milk, Laganja, Gia and Joslyn are all safe. Trinity looks beautiful, but none of the judges could understand her. She says this is a learning experience, and Sheryl Lee Ralph interrupts and gives her some Real Talk about learning to enunciate. Ru wonders if the flippers are a problem, but Ms. Ralph says that Trinity still needs to lose the pursed lips face thing.

Michelle Visage thinks Darienne is looking great in her pond scum green dress. Darienne says she got lost with the siren screeching in her ear. The judges think she got lost and completely disappeared.

The judges like Ben, but want his dress to be less. He could have taken the villain further, but still did a good job. Michelle thinks he only went halfway to Toni Braxton.

Everyone is astounded by the illusion that Courtney presents. Lucian was nervous during rehearsal, something which Courtney comments on (when she should have just stayed quiet).

Michelle immediate calls out Adore for her sloppy look. Someone thinks Adore could compete in American Idol. She’s thought to be talented, but sloppy.

The judges appreciate April’s hard work, but feel that she’s always falling short of the mark, especially with acting.

Courtney takes the top slot, while Adore gives us major bitch face. Trinity and April make up the bottom and lip synch to “I’m Every Woman.” Trinity has a fan, therefore Trinity stays. April sashays away.

Next week is the Snatch Game!! Stay tuned!!