You are here: Home / ENTERTAINMENT / On TV, The Real Crisis Is Boredom 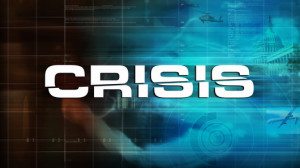 Crisis: Sundays at 10 Eastern on NBC

It’s always amazing to see what trends the networks are going to seize next. Last year, the networks were big on serial killers, spawning The Following, Hannibal, Cult, and Bates Motel. This year, apparently, one of the flavors of the week is hostage crises with the topic already rearing it’s head on CBS’s lackluster Hostages. NBC has also decided to go down this road (with a fairly straight up clone) with it’s newest Sunday night show Crisis.

Crisis, much like Hostages revolves around the core skeleton of a powerful Washington family ripped apart by a nefarious mastermind looking to use force in order to impose his will on the country. However, while Hostages was built entirely around the idea of a surgeon killing the president while under the knife, Crisis aims to be more ambiguous by adding political and diplomatic intrigue to the proceedings.

Everything about Crisis screams lazy. The show opens on some of the laziest green screening I’ve seen in recent memory (I’m inclined to think they felt it was meant to feel disorienting, but it feels bush league). Normally, when a show is lazy on it’s visuals it’s a one time thing, but even the image of a plane shutting down in mid-air and plummeting into a nearby industrial building (as shot from an adjacent diner) feels like a non factor. The whole point of visuals is to feel a visceral punch, but nothing this show tries to pull off registers from that standpoint.

Worse than the CG, the acting feels equally listless. Even with an all-star cast including Dermot Mulroney (who I thought was amazing when I saw his stint a couple years ago on New Girl) and Gillian Anderson (The X-Files), everything feels flat, wooden, and generally the sort of teleprompterese I only expect to see from politicians. There are however, a couple of bright spots in this pilot (made even more interesting by the fact that said actors were isolated from the cast for the rest of the show, making me truly appreciate the marvels of second unit directing maybe?) in Lance Gross and Joshua Erenberg, who play Agent Marcus Finley and Anton Roth respectively.

I wish I could blame just the acting and the visual effects, but the fact of the matter is Crisis is a triple threat of suck, as even the initial writing feels truly terrible. Our FBI alternates between complete omniscience and the absolute opposite, with the show going to ridiculous lengths to ensure our characters are lost (I may come from a middle class background, but even the most affluent people I know aren’t embedded with computer chips). Even the mid-show twist, which moves Mulroney’s Mr. Gibson from hero to villain seems completely out of the blue, showing a disturbing lack of a sense of pacing from the sort of twist that typically comes in the last segment of numerous prior pilots.

The Final Verdict: I spent some ink above mentioning all of the similarities between Crisis and Hostages, but I feel like I missed one of the most obvious connections in retrospect: I am completely uncompelled to watch either of them. It’s not very often that I watch a show where it feels like all parties involved thoroughly mailed it in, but Crisis fits the bill in this regard. Skip this, if you actually want to see a hostage situation turn into dramatic entertainment, write a skit or something, because quite frankly whatever you do it will probably be more entertaining than Crisis.