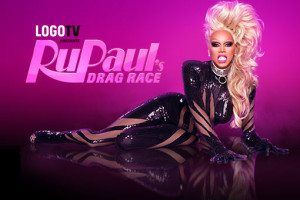 Previously on Drag Race, the queens did hip hop videos and Milk went home, but everyone felt it should have been Laganja. After elimination, the queens come in, and Trinity is frustrated, again. Ben makes a joke saying she didn’t get into the top three on purpose. HAHAHA. Darienne doesn’t like the joke and we don’t like Darienne when she’s being like this. Courtney’s upset, too about things. Trinity gives a speech about something and Bianca’s completely over it. Is there going to be a thrown down?

Problematic She-Mail. There’s a lot of talking about face colors. For the mini challenge, they will be helping out Michelle Obama’s Let’s Move Program, and working with fruit and veggies to make them more appealing using fancy nails. Everyone puts on their best nails and makes a bunch of fruit and veggies look really phallic. Bianca’s giving us her best Ugly Betty Realness and RuPaul makes a crack about bitter old cucumbers and drag queens. Laganja wins the mini challenge. The main challenge will be to make a make-up commercial.

The queens will be working in pairs. Ru will be picking the pairs, but Laganja’s team will get some extra time. Adore and Laganja will be doing “Mean Girls,” of course. Courtney and Joslyn will be doing housewives. Bianca and Trinity will be working together, and Bianca’s face falls. They will be doing working girls. Trinity would rather be by herself. That leaves Ben and Darienne, OH NO!!! They will be cougars. Ben thinks there’s some tension but should be able to work, since Darienne is talented.

In the workroom, Darienne’s nice when she’s not being a bitch. Ben feels that she’s too young to be a cougar. Darienne makes a come-back that doesn’t land, and things are already tense. Ru wants them to be able to sell her make-up. Trinity and Biance have an idea of doing a CEO and a hooker. Trinity flubs lines. RuPaul doesn’t want to hear any “I’m just gonna…” Ru wonders if this is the first time this has been called out.

The queens start their shoot. Adore has much better hair this time around. Laganja’s boring us and needs more valley girl, and IMMEDIATELY thinks “Rachel Zoe” which Michelle Visage nixes. There’s a hysterical moment where they’re supposed to turn around in the fan, but they keep turning around at the wrong times and it looks like a second rate ABBA video. Courtney and Joslyn do their housewives thing and I think this was highly edited because I know both queens are better than the dumb blonde moments going on. Michelle keeps giving us Adore face. Ben and Darienne come in looking like Jennifer Tilly and Jennifer Coulidge. They’re doing the SNL champagne girls, only Darienne’s never seen it. Their face wrapping is off. Last is the Working Girls. Bianca has good CEO act and Trinity speeds through stuff, but kind of has it. Trinity says she needs to stop and have fun, or else Bianca will kill her.

Back in the workroom, the mainstage will be Black and White. Courtney and Joslyn talk about how they are both very similar, but Courtney feels like she’s on a different level then Joslyn. Darienne comes down on Ben and Adore feels the psychic vibes coming through the room. Bianca and Trinity bond.

The runway starts. Our judges are Leah Remini AND LAINE KAZAN!!! I love her. Look her up. Laganja looks like a knock off bridal Elvira. Adore is 80’s Cruella de Ville. Bianca looks like Manilla Luzon going to an opening gala. Trinity does a reveal to show an AMAZING black and white dress. Ben is looking like a black and white version of Izma from “The Emperor’s New Groove.” Darienne is very matronly. Courtney is doing Klaus Nomi. Look him up. I’ll wait here. Joslyn is back in a bikini.

Bianca and Trinity are very campy. Trinity is actually funny. Their gowns are exquisite. Leah and Michelle get very Jersey on us. Leah didn’t know they had before and after moments. Adore and Laganja were good, due to Adore. Laganja’s working too hard, but Adore is HILAROUS. Laine says that Laganja’s outfit is tacky, which is like having Dolly Parton telling you you’re over the top. Ben and Darienne are cheesy and almost offensive. It ends up more like PSA against plastic surgery and they seem high. Ben is always in a character and Laine doesn’t like her outfit. Courtney and Joslyn were funnier then we expect and their commercial was more on point then the editing showed. Santino Rice gets the Klaus Nomi thing, but Joslyn gets read for wearing the same outfits. Courtney gets called out for looking too real, but Leah likes that look.

Adore and Laganja win. Laganja knows that they won solely from Adore, and is pissed. Ben and Darienne make up the bottom, and must lip synch to “Point of No Return.” Ben does her burlesque stuff, but Darienne does a good job of being present. In the end, BOTH stay, which would be shocking if we weren’t watching a double feature… or Wikipedia didn’t spoil it for me. (Whoever did that is a HORRIBLE PERSON!!)

Next episode!! Ben is sad, but relieved. Courtney says she was going to cause a riot if Ben had to go home, and Darienne realizes that this is a dig against her. Lagana is upset because she wasn’t the prettiest girl at the ball. Courtney, apparently, read Joslyn’s look, which we didn’t see, because we have another hour before Untucked! Everyone’s upset at EVERYONE!

Lajanga is all BLAH BLAH BLAH MAMA GURL WERK and Bianca snaps and rips her head off. HAHAHAHA no, that didn’t happen, unfortunately. Laganja’s shirt has her name on it, and is a wearing a no-smoking sign on her head. Problematic SheMail. Ru’s wearing sunglasses. The queens will have to lip synch upside down and on their back. Adore’s eyes fall off. Joslyn wins the challenge. The main challenge is a comedy show, and Bianca is overjoyed. Joslyn, being the winner, gets to pick the line-up order.

While everyone is getting their acts together, Courtney informs Joslyn how she should set up the line-up, and makes a good point about where to put Bianca and who to put after. Ben’s talking to herself, and Adore’s freaking out. “I thought *I* was the crazy one.” Darienne’s a bitch, Bianca reads Adore, news at 11. Joslyn tells some dad jokes. Laganja is under the table, looking like the Chicken Lady.

Ru comes in. Ben is under pressure, because he’s more character and not into one liners. Bianca is a little nervous since everyone’s looking at her. She’s more in the moment, so doing a set routine is harder. Trinity feels defeated. Ru surprises everyone by saying that she’s brought a bunch of senior citizens. Adore has a potty mouth and feels screwed.

Joslyn gives the line-up. Darienne, Courtney, Adore, Ben, Laganja, Trinity, Joslyn, Bianca. Joslyn’s not too smart about this, or as Courtney puts it, dumb as a fox. In the workroom, Trinity thinks this will be rough. Joslyn starts talking about her family and mentions that at some point her mother was up for a Tony, and people didn’t think she would get it, but she did and so this has something to do with… wait, WHAT?!!! Joslyn’s mother is a Tony winning actress?! Did I hear that right? Google is giving me nothing here.

On the mainstage, we have Bruce Villanch, and Jaime Pressley and it took me a minute to recognize her as Joy on “My Name is Earl.” The audience is full of, what I assume to be, elderly LGBT folks. Darienne opens us up, and is actually rather funny. There’s some genuine laughter going on. Courtney comes out and is a bit flat. She ends up singing a song she wrote about Mean Gays, which was cute and charming in her one person show, but here… Let’s put it this way. In person, she was one of the most vivacious, charming, and talented people I’ve ever met. On this show, she’s come across as the pretty girl who can’t do much else, and I can’t tell how much of this is editing. Adore comes out with a bunch of chola jokes and we don’t know the rest since it’s all been bleeped out. Ben has a few jokes, but is nervous, and so the delivery is way too fast. Some lady is “knitting” but it must be a set-up, since she’s not actually knitting and is just waving some knitting needles around. Either we have some smart alec producers or she came PREPARED. Ben gets heckled and politely ends her set. Laganja comes on and the audience is stupefied. Do we have any mirrors to see if they’re still breathing? Trinity joins us, looking great, and … holy crap, she’s funny. Not just funny, but hilarious and very present. Keep this up. Joslyn falls flat. Bianca knocks it out of the park, as we knew she would.

The judges feel that Darienne was comfortable. Courtney was ok, and the schtick was interesting and clever, but needed to be more on point to be impressive. Adore needs to have less self-doubt and less cussing. Ben doesn’t get comic timing and Michelle is getting tired of the showgirl look. Laganja is decidedly not funny. She starts her crying routine and Ru looks bored and launches into Real Talk. Trinity did us proud and Ru gets emotional. Let’s take a moment here to hope that this doesn’t become Tyra v2.0. The judges wonder about all of Joslyn’s choices. Bianca killed it and Jamie wanted to be insulted.

Bianca wins. Laganja (praise the hundred little gods!) and Joslyn are in the bottom two and must lip synch to Pink’s “Stupid Girls.” Laganja looks defeated. Joslyn looks ready to eat someone. The highlight of the whole thing is when, unchoreographed, both queens do a drop split on the beat of the music. Afterwards, Laganja is muttering “please don’t send me home” which means Joslyn stays and Lasanga heads back home. As she’s leaving, she says she the first queen to actually “chasse away.” That’s not the lyric…

Join us next time, when Logo inexplicably moved the timing back an hour!!