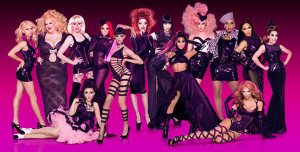 Previously on RuPaul’s Drag Race, we talked about Cher, Chaz, Chad, and Trinity took off. Courtney, fresh from winning, squawks into the workroom and everyone tells her to shut up. Adore feels that it’s time to step it up, which is never a good sign. Someone (Courtney?) points out that Courtney and Bianca haven’t lip synched, which annoys Bianca, since this plays into our Courtney Act is a Stuck Up Bitch script. Our guest judges will be Neal Patrick Harris and his Husband, who apparently is an actor but looks like a face. If you know what I mean.

So, we have the top six. We’re saved from problematic banter by RuMail. Sorry, I don’t have a better name. There’s a lot of wedding talk, so this is going to be a wedding game day, if you didn’t know. The mini challenge is going to be abstract paintings done with bodies. I have no words. The paintings are about what you’d expect from drag queens flopping around like glittery, gasping trout. There’s a bunch of really stupid painter jokes that I have no interest in repeating. For whatever reason, Bianca wins.

Back in the warehouse, women get presented and it turns out that Ru is a minister and these ladies are going to get married! All the drama focuses on who gets the fat guest… wait, no, sorry. That’s Project Runway. Anyway, as the winner, Bianca passes out the brides. The group is followed by the grooms, and it turns out that it’s the GROOMS that are getting made over. Were you surprised? I know I was. Adore can’t do anything and is freaking out.

Bianca chats with her couple and the groom is shown to be the usual taciturn male. Joslyn loves all things wedding and the groom is concerned about dressing up. So, why’d you come? Ben’s groom has a full beard. So does Darienne’s, who also want a Goth wedding (are those still a thing?). Courtney’s got a tall drink of water and has no idea how to sew dresses since she’s used to wearing lipstick and perseverance. Adore informs the groom that he will be beating the groom’s face, and there’s this moment, that may or may not be scripted, where the groom gets defensive and is ready to throw down.

Darienne refers to Courtney’s dress job thing as a bath mat muumuu. Bianca informs her groom that she’s no longer hitting on straight men since there are enough gay men in the world. The groom is from Holland, so talks about how cool it is to live there. Bianca realizes that she’s made a friend and doesn’t know how to process these new feelings. Joslyn’s groom turns out to be a basketball player (really? Isn’t he kinda short? Or is that a trick of the camera?) and doesn’t want to think about what the guys at home will think. Ru is shocked when Joslyn says they will be going for a demure look. Darienne’s groom wanted to be on the show and says that he’s looking for Jim Morrison drag couture. Bianca is doing a much more classic look for her groom. Courtney points out that it’s another floor length boat neck piece. I’m not sure I see the problem, since RuPaul is seen, 99% of the time, in a strappy mermaid style dress, but what do I know.

Bianca helps Adore with some sewing tips. I think. I’m not sure since Adore just starts hot gluing the dress on the dress frame. Her groom balks at the “Thrift Store Wig.” I didn’t realize we were wig connoisseurs. The talk is of Courtney’s bridal muumuu and how Joslyn’s short basketball player is afraid of locker room chat. There’s a lot of talk about “hog bodies.” Bianca refers to Mr. Basketball as that one girl Gremlin.

The judges liked Joslyn’s look, but there wasn’t a sense of unity. The groom’s face is too metallic. The groom ends up getting overwhelmed and walks off the stage, though we think it’s to be sick. Courtney and groom are wearing a bunch of butterflies, though the judges feel that Courtney upstages her groom. Bianca and her groom are on point, with a good resemblance. The judges question the lack of a train, to which Bianca responds, “He’s having a hard enough time walking in heels with his balls up his ass…” Actor would mistake groom for a woman, and Ru questions how many women he’s been around lately. Darienne and groom are going away from the traditional gown, but the judges don’t get “Goth bride” out of it. NPH hates it. The judges wish that Ben had given his signature eye on his groom but otherwise are pleased with the look. Adore’s groom looks like Lady Gaga’s unfortunate looking sister. Detail is non-existent, and both Adore and groom are labeled as disasters.

Ben is safe, and Bianca wins a trip for two to Hawaii. Adore and Joslyn are in the bottom two, and lip synch to “Think” by Aretha. It’s awkward for everyone, including you and me. Adore stays, and Joslyn leaves us. A part of me will miss her. Join us next week!!!