“We have no troubles here. Here, life is beautiful. The girls are beautiful. Even the orchestra is beautiful.” These reassuring words, spoken by Alan Cumming’s cunning  Emcee, are intended to make us feel as though everything is going to be just fine. After all, anything goes at the Kit Kat Klub in Roundabout Theatre Company’s flawless production of Cabaret . But we are all too wise and know that it is only the beginning of the end. It is 1920’s Berlin and Hitler’s regime will soon seek to create their master race, obliterating anyone who is not of them.

This haunting production is back once  again at Studio 54, where it stands  in  perfectly marvelous form. Wait a minute!  Isn’t this same revival that was  just on Broadway a few years ago? Yes, savvy theaterlovers, it is . It opened in 1998 (first in the former Henry Miller Theater and later to Studio 54), where it ran for almost 6 years and took home 4 Tony Awards.

What prompted Roundabout theatre to bring it back to the Broadway stage is a curious question. Nonetheless, if you missed it the first time around, you’d be foolish to “sit alone in your room and not hear this music play.” Directors Sam Mendes and Rob Marshall must be running on the basic principle that “if it ain’t broke, don’t fix it”, for everything that made their last revival such a long running hit is fully intact, giving the show a timeless and relevant place in the canon of musical theatre.

Film  star Michelle Williams’ opens like a broken-winged sparrow in her portrayal of Sally Bowles, which is exactly what is required of the role.  This Broadway season was packed with solid performances from leading ladies in musicals so the pool of competition was deep.  But it is a shame that Williams was not even considered  for this  impressive Broadway debut.

Tony voters were not blind, however, to the always solid and reliable Danny Burstein and Linda Emond. Their Herr Schultz and Frauelin Schenider, respectively, are touching and tenderhearted.

I saw this production in 1998 on a trip to New York City–two years before becoming a New Yorker. At the time, it was the best show I had ever seen. Of course, I had only seen a total of  five Broadway shows. 16 years have passed and I have attended countless productions on Broadway. I maintain that few shows have matched the genius of Sam Mendes and Rob Marshall’s  Cabaret.  To miss it again should be verboten. 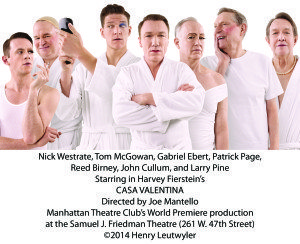 Inhibitions are left behind not only at the Kit Kat Klub, but also in a  1960s Catskills, NY resort called Casa Valentina, the setting for Harvey Fierstein’s new play of the same name.  Fierstein is no stranger to writing characters who enjoy donning a dress. From Torch Song Trilogy to Kinky Boots, his campy characters have paraded around in ladies wear without shame or restraint.  At Casa Valentina, the dynamic is completely different.  Based on an actual resort, the play centers around George/Valentina (Patrick Page) and Rita (Mare Winningham), a straight  couple who host gentleman wishing to break from the confines of masculinity.  Surprisingly, there isn’t a whiff of homosexuality in any of the men; At least not from the outset.

What Casa Valentina offers these gentlemen  is an escape from their routine life.   Charlotte (Reed Birney), clad in exquisite and smart 1960’s fashion observes upon her arrival that women have “bubble baths and beauty”, while men get saddled with too much responsibility. (This was the sixties, don’t forget!).

We soon learn that Charlotte  is the manipulative antagonist whose mere presence draws division from her fellow housemates. She is intent on starting a political organization that would grant protection for straight transvestites. It sounds like a winning proposal until she insists that the group adamantly exclude homosexuals.   Stage stalwart John Cullum, who adopts the pseudonym Terry, delivers a tender and hilarious speech in favor of their participation. On a side note, if you’ve ever wondered what John Cullum looks like in drag, picture the scariest generic grandmother you can muster and compare it to Cullum’s female alter-ego. It is truly stupefying.

Joe Mantello’s intelligently directed work was nominated for 4 Tony Awards including a nod for Birney and Winningham.  A startling omission, however, was Tom McGowan’s scene stealing turn as Bessie, a  plus sized gal who, in  her own words is “so pretty I should be set to music.”  McGowan is best known for his recurring role as the station manager on TV’s Frasier. Here, he adds a much needed lightheartedness to this generally serious work. Near the end of the play, in an exchange with Rita, he offers a meaningful explanation about why he seeks comfort at Casa Valentina.

Fierstein’s  drama  showcases  the often seen theme of  personal freedom and individual choice, but it delves deeper. While we may be unrestrained  to be who we are  and what we wish, it is rarely without consequence to those nearest to us.