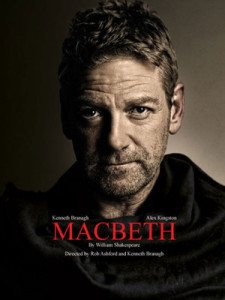 Rob Ashford is the last person I would have expected to helm a broad  and brooding production of Macbeth along with Kenneth Branagh. This is to not to question his competency. After all, the eight time Tony nominated director walked off with the top prize for Thoroughly Modern Millie in 2002. Following that, he went on to direct Curtains, How to Succeed in Business Without Really Trying, Evita, and other large scale, splashy musicals. Ashford, however, was also the director of Anna Christie at London’s Donmar Warehouse. Alex Poots, artistic director of the Park Avenue Armory, had seen the production and loved it so much that he tapped Ashford to work with Branagh.

The result of their collaboration premiered at the Manchester International Festival in July 2013. Now, they have brought their sprawling production of Macbeth to the cavernous drill hall of the Park Avenue Armory. Even before steping foot into the Armory, there is a sense of majesty for what awaits. Majesty will indeed be served in this Scottish feast, with side orders of madness, malice and murder. It’s practically an alliterative meal of destruction, but one that will leave you fully sated.

As audience members wait for the doors to open they are divided into various Scottish clans, the purpose of which refers to the clan system in 11th century Scotland. Once you enter the performance space, an immediate eeriness is felt. Cobblestones, moss and dirt cover the hall floors and torch-lit guides lead patrons past a large formation of Stonehenge-like rocks to their stadium style seats. Then the production begins. Macbeth’s (Kenneth Branagh) Scottish army is at war with the Irish and Norweigan troops. It is intense staging that will literally shake the rafters.

Once the battle is over, Macbeth is visited upon by three witches who prophesize that he eventually will become the King of Scotland. Charlie Cameron, Laura Elsworthy, and Anjana Vasan offer some of the creepiest and most effective witchcraft I’ve ever seen.

Macbeth has a conversation with his wife that goes something like this: “Dear, I just saw these three witches who tell me that I’m going to be King.” Lady Macbeth (Alex Kingston), equally as power hungry says, “Oh! That’s terrific, honey. Be sure to kill anyone who stands in your way.” So, the dutiful husband listens and takes out Duncan (John Shrapnel) and Macduff (Richard Coyle). It doesn’t get any better. Guilt washes over the ambitious couple to a tragic finale. Granted, Shakespeare was thousand times more eloquent, but you get the point.

Branagh and Kingston lead a huge cast in this  well-oiled, bold and showy production. Scoring a ticket may be as difficult as seizing a royal throne, but to those who are fortunate enough to acquire one, you’ll be in for a bloody exciting time.