You are here: Home / ENTERTAINMENT / You are Cordially Invited to “The Queen of the Night” 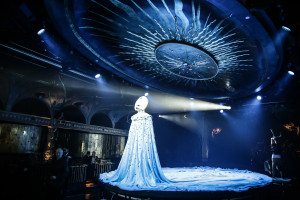 “The Queen is thrilled that you will be joining us to celebrate the initiation of her daughter, Pamina.” And thus opens up the invitation “Queen of the Night” the latest in the theatrical, surround sound, interactive experiences.

Walking into the Paramount hotel, or I should say, the side entrance of the hotel, it’s not obvious what is about to happen. In fact, it almost feels a little bit like lining up after a show to try and get autographs, with half the ticket holders are dressed in tuxes and fancy dresses, and a few are in full out costumes. Of course, there were a few hold outs who came in jeans and t-shirts. Let this be a warning. Don’t be that guy or gal.

Before we begin, I want to give a warning to all of you out there. There was a lot of touching in this show. That’s not a bad thing, but I have some WASPy family members and friends who would probably die of mortification at about 20 minutes in. I’m not sure if you’re one of those people. 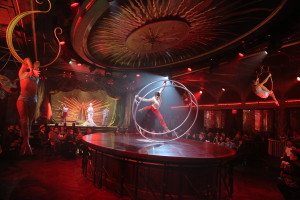 “Queen of the Night” is a loose adaptation of Mozart’s “The Magic Flute.” Only, there’s no flute, and most of the characters don’t have names, and if you didn’t know the story already, you might not have any idea what’s going on. This isn’t a bad thing, but being familiar with the opera, I went into it expecting a more cohesive storyline and references to musical themes. The “plot” was simpler than most Cirque du Soleil’s plot, but again, that really didn’t seem like the point of this piece.

The entire evening is centered on immersion. The wait staff is always in character. The actors are always in character, which seems redundant, but since the opening of the show is a large cocktail party, and the central piece of the show is a feast, it’s a different animal than getting on a stage and reciting lines. Even after the show ended, and you are allowed to remain in the bar area, the wait staff still seemed to be “on.” 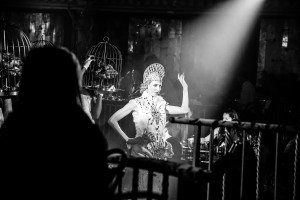 The highlight of the show would have to be the feast. Various dishes were brought out, including a roast suckling pig, and you are encouraged to wander around, from table to table, and trade and sample the various main dishes. I encourage you to do so, even if it feels like you’re scavenging. We all had extras.

Without giving too much away, “Queen of the Night” surrounds you and draws you into its world, and for a moment, it feels almost timeless. Even at the end, instead of dumping out into Times Square, you’re allowed to linger, have another drink, talk to the people at your table, see some of the set pieces get reset, and slowly return to the mundane world. For a fancy dinner and show, unlike most things you can find in New York, it is well worth the price. Dress to impress and get swept away. Tickets can be bought here.