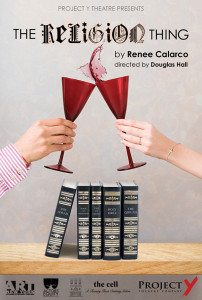 Rumspringa-the  time frame when typically conservative Amish teens are permitted to taste all the debauchery the world can offer- is a punchline used by  stand-up comedian Glick (Curran Conner) at the start of Renee Calarco’s The  Religion Thing. After taunting and teasing the audience with the running joke,  Glick adopts a more serious tone and observes how, despite their opportunity to permanently rebel , most Amish adolescents return to the fold. In the 90 minutes that follow, we are fortunate enough to witness a similar faith journey of  all four characters in this extremely funny and contemplative dramatic comedy.

Mo (Katherine McLeod) and Brian (Jamie Geiger) are a seemingly succesful couple. She’s Catholic. He’s Jewish. Neither adhere closely to their own religions until Mo’s best friend Patti (Danielle O’Farrell) ,whom she has not seen in quite some time stops by the house with her new husband, Jeff (Andrew W. Smith) . Mo and Brian giggle at the fact that the two newlyweds met at  their evangelical christian mega church. Once a “party girl”, Patti has now shunned her devilish ways and has decided to quit her career as a lawyer, all in pursuit of being the wife and mother she’s destined herself to be. Patti’s drastic life choice doesn’t bode well with Mo–primarily due to her unique of partnership with Jeff. More could be written on this, but why ruin the plot?

As the two-act play unfolds, we gain depth and insight into Calarco’s characters as they struggle to find peace and resolution in  their own individuals faiths. Two scenes-one in which Jeff’s explains his path to eternal salvation- the other, Brian’s imagined dream visit from a Rabbi are endearing, charming, and redemptive.

While it floats like a breezy sitcom, The Religion Thing simultaneously cuts deeper to the core of spirituality with truths that must be explored by each couple. Director Douglas Hall has assembled an excellent cast that handles the material with a fine balance of thoughtfulness and hilarity. The dialogue is crisp, honest, and most importantly, respectful towards the impact that religion (or lack thereof) has on each of our adult lives. Its’ intention is not to sway us towards a particular dogma, but through its‘ clever writing, will grant us the opportunity to question the value we place on our spiritual doctrines.