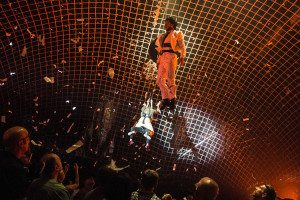 When you go see Wayra, wear comfortable shoes.  Everything else will be gravy.

Since the late 90’s, De La Guarda/Fuerza Bruta has been entrancing audiences at the Daryl Roth theater, near Union Square. Before the opening of Wayra, this year, I hadn’t seen any of their shows, though I once did turn down a ticket to De La Guarda. So, I came into this show only knowing about a large plastic thing, which I saw on America’s Next Top Model, once, and that there’s a spout of water that could get you soaking wet. For the record, I brought a change of clothes and a towel, just in case.

From the moment you walk into the performance space, Wayra pulses. Before the show starts, the lights and music are already setting the club like atmosphere. Feel free to let yourself go. Before you enter, there’s a bar serving drinks, so get there a little early and relax. Once the show starts, you are hit with a wall of drumming and screaming and lights, setting the tone for the in your face nature of the piece. As an audience member you will be asked to move around, as the performers and performances come at you from the front, sides, back, and even the ceiling. The direction is very well set up that it’s hard to miss anything, and unless you are incredibly unlucky to be a short person surrounded by tall people, and can’t move, every spot is a good spot.

I have no idea if there was a story being told, or if there was any reason to the vignettes, unlike a typical Cirque du Soleil show, where there is usually a story to be told, even an incredibly basic one. Here, there’s a man running through traffic, women playing at the shore, and other people dancing through the air, so while there might be a continuity, it was lost on me. That is completely fine, by the way. Each piece impresses and surrounds you in a way that the aforementioned Cirque can’t. There are even instances where you can touch what’s going on around you, and sometimes it comes out to touch you.

Coming out of the show, I was soaked, elated, and felt like I wanted to run and do something. Mostly fly, if not have an opportunity to . Wayra fills the space with an optimism that comes at you like a blast of wind. It’s easy to let yourself go and get carried away by the energy of the performers and music.

For the record, Wayra does use loud music, strobe lights, and water effects. Some of these are avoidable.  I still brought a towel and a change of clothes, and was glad, though THAT feature can be viewed from afar, if you don’t feel so inclined. Tickets can be bought at their webpage.