You are here: Home / ENTERTAINMENT / Theater Review: “The Last Days of Cleopatra” 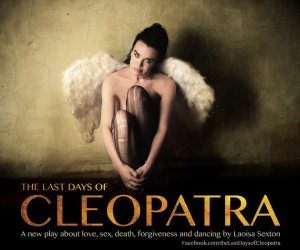 Familial dysfunction in drama can often be the basis for a well-executed and entertaining train-wreck. Call it “Schadenfreude” or simply good old-fashioned entertainment, but when relatives unravel, our collective tongues salivate in relief. “Thank God that’s not us”, seems to be the familiar refrain.  At Manhattan’s Urban Stages, one such family is on the brink of implosion.

Playwright Laoisa Sexton is  an edgy new playwright who received the NY Times Critics Pick for her last work, For Love. Her latest work, The Last Days of Cleopatra is a challenging, slow   journey into the souls of well-acted, but hugely unlikable Irish characters. The show centers around an unseen force, Tess, the dying matriarch. Her disjointed family assembles to revisit old wounds and sling accusations towards each other.  Each of them rarely interact with one another and the lines are delivered in the manner of  long, monologue-like asides.

Harry (Kenneth Ryan) is the father and fancies himself a ladies’ man, although he looks like Tom Skerritt gone through the ring cycle after a  long night of Jameison’s.  Furthermore, he takes no responsibility for his actions or inactions. His constant refrain is, “That’s what yer up against. Ye know it yerself.” His son, Jackey (Michael Mellamphy) is an insolent homosexual who is essentially bitter about himself, everyone around him, and the world he inhabits.  Playwright Sexton steps into a role she created as daughter and sister Natalie, perhaps the most tolerable of this bunch. She earns her keep dressing in a variety of costumes for parties and role-playing.

The program notes that the setting is  “Ireland in the middle of its’ never ending recession”, but after awhile, the audience begins to feel as though the play  itself might also be never ending, as it seems to grasp for a target. This isn’t to say that Sexton’s  writing isn’t merited. Irish immigrants may appreciate the inside humor and colloquial feel. Upon entering the lobby, there is a glossary of slang terms used in the show. The list is long and one can’t help but think that the play, as seen through the eyes non-Irish folks, lands like an episode of Seinfeld to someone who doesn’t understand English.