You are here: Home / uncategorized / Theater Review: My Manana Comes 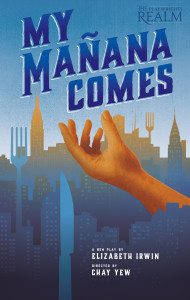 Few of us, including those who have worked in service industries, seldom pause to reflect on the labor that has been put forth when we sit down to dine at our favorite restaurant. As My Manana Comes delicately points out, there are heartaches, back breaks, hopes and ambitions behind every entrée.

The setting for Elizabeth Irwin’s play is the kitchen area of a posh Upper East Side restaurant. Here, four bus boys discuss their every day lives, all of which differ significantly from the privileged lives of their patrons. Peter (Jason Bowen), is the alpha male who is satisfied with his daily routine. Meanwhile Whalid (Brian Quiijada) keeps an eye towards EMT certification and a plan to forsake the mundane existence which is his current reality. Pepe (Reza Salazar) and Jorge (Jose Joaquin Perez) join them as two illegal citizens desperate to fulfill promises and craft better lives for themselves.

Irwin’s dialogue is snappy and accurate and reveals truths that are simply ignored or disregarded by the well to do. Irwin also subtly weaves those truths into exchanges with the illegal immigrants, leaving the audience with a hearty meal of cultural philosophy. There is a moderate amount of dramatic climax, but this is undeniably a character piece.  Under Chay Yew’s swift direction, his well tuned cast turns the back room of this  dining establishment into a colorful yet pensive serving of theater that is both thoughtful and entertaining.  You’d better hurry though. They clear the tables and close the shop this coming Sunday, September 20th. 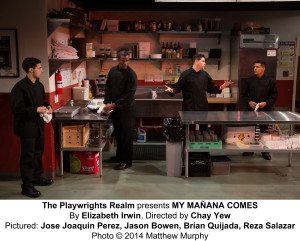