You are here: Home / ENTERTAINMENT / ARTS / Theater Review: “You Can’t Take It With You” 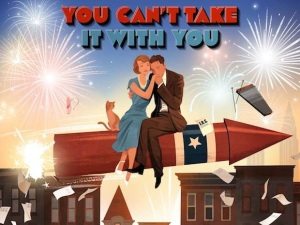 Are you experiencing feelings of sadness or minor depression? Have you just received word that your best friend is moving to a remote island of Zanzibar? Were you recently informed  that your partner of twelve years has been cheating on you? Or are you simply existing in a continued state of exuberance with the belief  that  life can’t get  any sweeter? If you answered “yes” to any of these questions, ask your doctor if Kaufman and Hart is right for you.  If your doctor has any credibility, the prescription will be a magical elixir of happiness. Side effects may include outbursts of unrestrained laughter, giddy feelings of delight, and the idea that all is right in the world. There is a strong likelihood that this cure will last long after you’ve left the Longacre Theatre, where the classic 1937 comedy You Can’t Take It With You is enjoying a (hopefully) extended residency.

Oh sure. You’re probably thinking, “Classic comedies are about  as funny as Bill Moyers on Frontline. They are folksy and outdated and the “jokes” rarely land.”  Believe me; this production is different, thanks to an incredibly fine ensemble cast, led by stage and screen giant James Earl Jones. In fact, it may just be the best ensemble working on  Broadway right now. With a roster of theatrical names joining him  including  Annaleigh Ashford,  Elizabeth Ashley, Johanna Day, Julie Halston, Kristine Nielsen, and Mark Linn-Baker, there is every reason to expect a joyous night of theater. Lo and behold, those expectations will be met and far exceeded.

George S. Kaufman and Moss Hart’s story takes place in Manhattan’s Upper West Side. David Rockwell’s stunning and sprawling townhouse may cause modern day New Yorkers (living in virtual shoeboxes)  to scratch their heads about its’ palatial quality, but this was  1937 after all.  Inhabiting this house is the Sycamore family and their quirky band of fringe folk. Grandpa (Earl Jones) spends his days playing with snakes and avoiding taxes. Penelope Sycamore (Nielsen), just happens to be a playwright after a typewriter was accidentally delivered to her doorstep eight years ago. Nielsen brings her typical kookiness into the fold, as only she can deliver.  Her stage characters are often similar to one another and yet she makes each one decidedly and deliciously marked.  Penelope’s husband, Paul (Linn-Baker) , spends his time in the basement fiddling with fireworks, along with house vistor Mr. DePinna (Patrick Kerr).  Later, Penelope rediscovers a unfinished Greek style painting of DePinna and decides to finish it while he poses in a toga.  Meanwhile, daughter Essie (Ashford) is being taught ballet by another houseguest, Boris Kolenkhov (Reg Rogers). There’s little hope for Essie’s prowess (or lack therof) in dance, and her bohemian husband Ed (Will Brill) doesn’t add to much to her unskilled routines with his accompanying xylophone pieces.

Let’s not forget two veteran actresses who know to milk every blessed moment each time they step foot on a stage:  Elizabeth Ashley and Julie Halston. Ashley plays Olga, a grand Russian duchess and friend to Kolenkhov. Though it occurs towards the end of the show, her entrance is the stuff of theater legend and her performance overflows with vivacious joy.

Not since Halston appeared downtown in Charles Busch’s The Divine Sister have I  been more amused. Here, she plays Gay Wellington, a drunk actress planning to participate in the read through of Penelope’s new play.  Her stage time is quiet limited, but after witnessing this comedic genius slink up a staircase reciting a limerick, you’ll be doubled over so far with laughter that you might need resuscitation. This is not a hyperbolic statement: just be warned.

Then there are the “normal” ones. Alice (Rose Byrne) and her fiance, Tony Kirby (Fran Kranz). Alice is the only seemingly grounded individual in the Sycamore clan. Kirby’s pedigree is much more prim and polished and, like all couples, they must face the uncomfortable situation of introducing each other’s parents. Byron Jennings and Johanna Day (Mr. and Mrs. Kirby) are excellent as uptight WASPs who look as though they’ve been baptized in pickle juice. It doesn’t take a brain surgeon to figure out how the initial meeting will unfold.

The message of You Can’t Take It With You is simple and straightforward: Relax. Enjoy Life. Don’t Stress. While it remains true that classic comedies can often feel outdated, nothing is further from the truth with this production . With Scott Ellis’ fine direction and a cast that dreams are made of, its’ timeless  lesson is a perfect reminder for our all-too-frequent stressed out selves.

You Can’t Take It With You is now playing at Broadway’s Longacre Theatre 220 West 48th St. (between Broadway and 8th ave.)  For tickets, visit the box office or http://youcanttakeitwithyoubroadway.com/