You are here: Home / ENTERTAINMENT / ARTS / Theater Review: “On the Town”

Stop what you’re doing. Just stop. Ok-first finish reading this review. Then, point your web browser to http://www.ticketmaster.com or take a walk to Broadway’s Lyric Theater on West 42nd street. Here, you can treat yourself to tickets for the finest Broadway show you’ve ever seen. If you’ve been a thoughtful and caring person, consider it a personal reward. If you’ve been a miserably  cantankerous heel, this show is certain to transform you into the exuberant child that lies within. 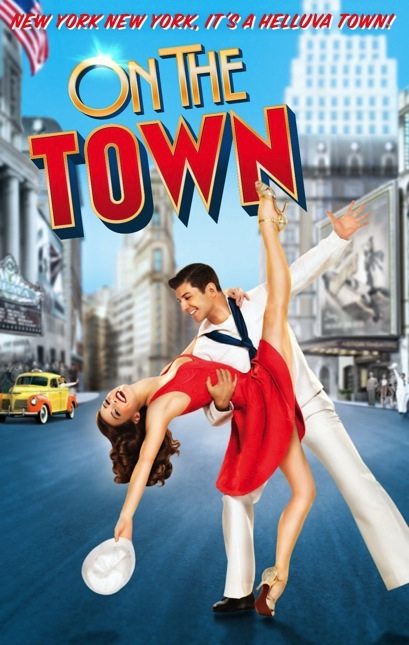 The third revival of the classic On the Town is back and it is the greatest gift any theatre goer could ask for. If ever there were any plodding moments or hoary lines of script  in the original 1944 version, they have been scrubbed away and renovated by a new production that is as exciting and fresh as a  visitors’ first time in New York City. For Chip (Jay Armstrong Johnson), Ozzie (Clyde Alves), and leading man Gabey (Tony Yazbeck), the playground of Gotham is their premiere experience and in 24 hours, they plan to capitalize on the sights and sounds (particularly those of the female type). Three sailors, twenty-four hours, numerous sights and countless women. That generally summarizes the plot. How is it then, that  a show with such a flimsy story could be stretched out into a full-fledged, two and a half hour production that packs enough entertainment value to make Las Vegas seem like Bayonne, New Jersey?

To begin with, Leonard Bernstein wrote the music. Even non theater aficionados will likely be familiar with the same man who wrote West Side Story. This score is every bit as sophisticated as West Side Story, and under James Moore’s sharp musical direction, the orchestra elevates it to angelic proportions. These are the original arrangements which were used in the 1944 staging. With 28 players (the largest orchestra  currently represented on Broadway)  nothing but brass and honey float from the pit.  There is audible evidence from the moment the familiar strains of “New York, New York (A Helluva Town)” are heard, but prior to that, a rousing orchestral version of “The Star Spangled Banner” fills the theater with pomp and anticipation. Audiences are encouraged to sing along, and the level of expectation for what will soon unfold sky-rockets. Add to this the timeless lyrics of Betty Comden and Adolph Green and  the recipe only gets richer.  Even in the World War II era, Comden and Green were able to fully capture  solitude in a metropolis.  In “Lonely Town”, Gabey, feeling deflated after not having met Ivy Smith aka “Miss Turnstiles” (Megan Fairchild) sings about his solitary sadness: “A town’s a lonely town/When you pass through/and there is no one waiting there for you/You wander up and down/The crowds rush by/A million faces pass before your eye/Still it’s a lonely town.” The staging during this song is dramatically  precise as Gabey stares longingly  from downstage into the audience. Here,  nameless ensemble members, parked in the theater aisles, provide back-up as well as the essence of the constant city dweller’s dismay-one of aloneness in a land of many.

The cast? Flawless. Yazbeck’s vocals and physicality are astounding. In his Gabey, he is able to combine both a masculine confidence with the wide-eyed innocence of youth. Fairchild,  making her Broadway debut from the New York City Ballet, has gently landed at the Lyric, where her portrayal of Ivy Smith is nothing short of adorable. When the two lovers unite to create a dream sequence Coney Island ballet, there is beauty and grace like no other. Accompanying the dance are the consistently lush orchestrations, which are best enjoyed in silence. At this particular performance, a rude couple behind me felt the need to chatter about what was happening onstage during the scene. I darted them an icy stare until it froze them into apology, followed by silence.   I would encourage  those reading this  review (once you purchase tickets)  to fully savor this moment and offer menacing looks to those around you who may be disrupting the moment. I digress. Where was I? Oh right. The cast!  Elizabeth Stanley is Clair De Loone, an anthropologist forcefully sinking her hooks into Ozzie. Stanley is channeling a dose of Lucille Ball and a dash of  Joan Crawford creating a character that is kooky, campy, and downright hilarious. Joining her on this camp wagon is Alysha Umphress, the buxom, cab driver, Hildy. Hildy eyes Chip as her next “customer”, and proceeds to lure him to “Come Up to My Place” in a song that also showcases the dexterity of Johnson. Let us not forget Jackie Hoffman, the only character actor I know  who could turn a funeral into a fun house. Hoffman’s antics shine once again as she embodies numerous parts, the funniest of which is Maude P. Dilly, a vocal “coach”.  The rest of this ensemble pulls off the nearly impossible feat of both singing  and dancing  with absolute finesse and impeccability. Joshua Bergasse’s choreography was inspired by Jerome Robbins’ original. Not being knowledgeable in dance it is difficult to offer accurate criticism, but I can assure you that it is the most involved  musical theater dancing I’ve witnessed.  All of the players use the clever  book and the score to create lengthy moments of comic slapstick, none of which are too much, but rather exactly on target. 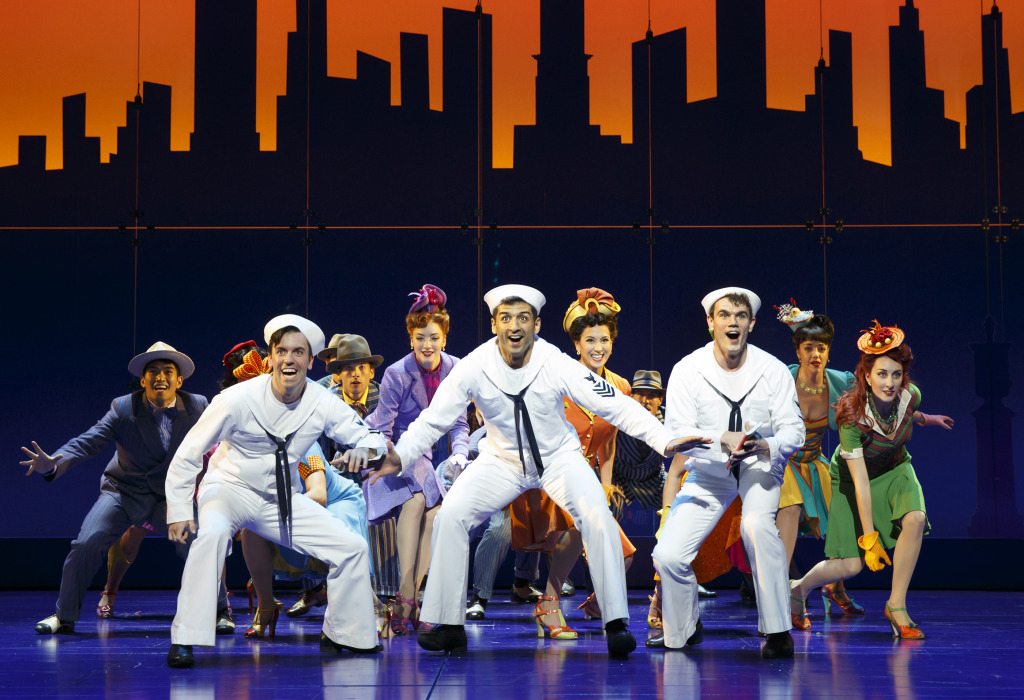 Beowulf Borrit’s scenic and projection design is a kaleidoscope of colorful, cartoonish cheeriness. Combine that  with Jason Lyons’ glistening lighting design and Jess Goldstein’s period perfect costumes, and you’re left with an intoxicating visual cocktail that will quench your thirst for top-notch production value.  Director John Rando has overseen every aspect of this gem with cool detail and playfulness. 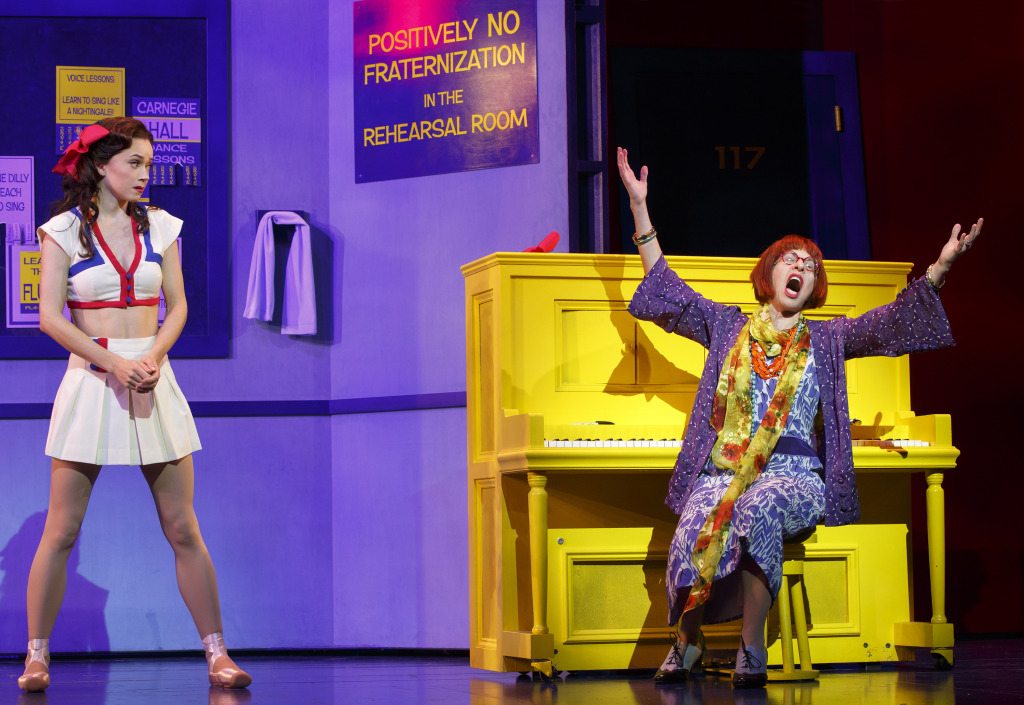 Have I convinced you? Allow me to drive the point home. On the Town is simply astounding. It  recalls time when the naivete and aspiration of every visitor to New York was pulsating  and alive. As residents, we can tenderly relate to the first time desire to experience all that we could, for we were once the Gabeys, Chips, and Ozzies of Times Square. Now, as we inhabit the streets on a daily basis with a cocksure sense of entitlement and pride, we  view the show as a reminder of what makes our town so alluring and vivid. Upon meeting Ivy Smith, Gabey sings, “What a night/Suddenly you came in sight/Looking just the way I’d hope you’d be/I’m so lucky to be me.”  Let us please  share in your luck, Gabey. For it is any wise ticket buyer  to this marvelous production who will be just as fortunate as you.

On the Town  is now playing on Broadway at the Lyric Theater, 213. W. 42nd Street between Broadway and 8th Ave. For more information, http://www.onthetownbroadway.com or visit the box office