You are here: Home / ENTERTAINMENT / ARTS / Theater Reviews: “The Brightness of Heaven”, “The Belle of Amherst” and “Livin’ La Vida Imelda”

The Brightness of Heaven

Rest assured that when families convene, drama will ensue. No matter how close or how strained the relationship, words will be shared, opinions forced, and wounds reopened. Playwright Laura Pedersen paints a portrait of a family torn in various directions in her  faith based period  play The Brightness of Heaven, now playing off Broadway at the Cherry Lane Theatre.

Pedersen’s play takes us to  1974  Buffalo, NY to  the staunch Catholic home of Ed (Peter Cormican) and Joyce Kilgannon (Kate Kearney Patch) . Ed’s sister, Mary (Paula Ewin) is visiting and they are planning a surprise gathering for Ed,  at the local high school where he  taught for many years.  Soon, their home will be filled by Mary’s children, Grace (Emily Batsford) and Jimmy (James Michael Lambert). Grace is a social recluse who has never dated a man. Jimmy is openly gay, a taboo even more egregious during the Nixon era. Ed and Joyce’s children are soon to arrive as well-Brendan (Bill Coyne), an unsuccessful soul who copes with life through  alcohol, Kathleen (Kendall Rileigh) the strong-willed middle child who is making waves with her future nuptials , and Dennis (Mark Banik), who is the only adherent to his parent’s strict values.

The Brightness of Heaven is now playing off-Broadway at the Cherry Lane Theatre, 38 Commerce Street (west of 7th Ave. South). For tickets and information, visit http://www.cherrylanetheatre.org/onstage/the-brightness-of-heaven/ 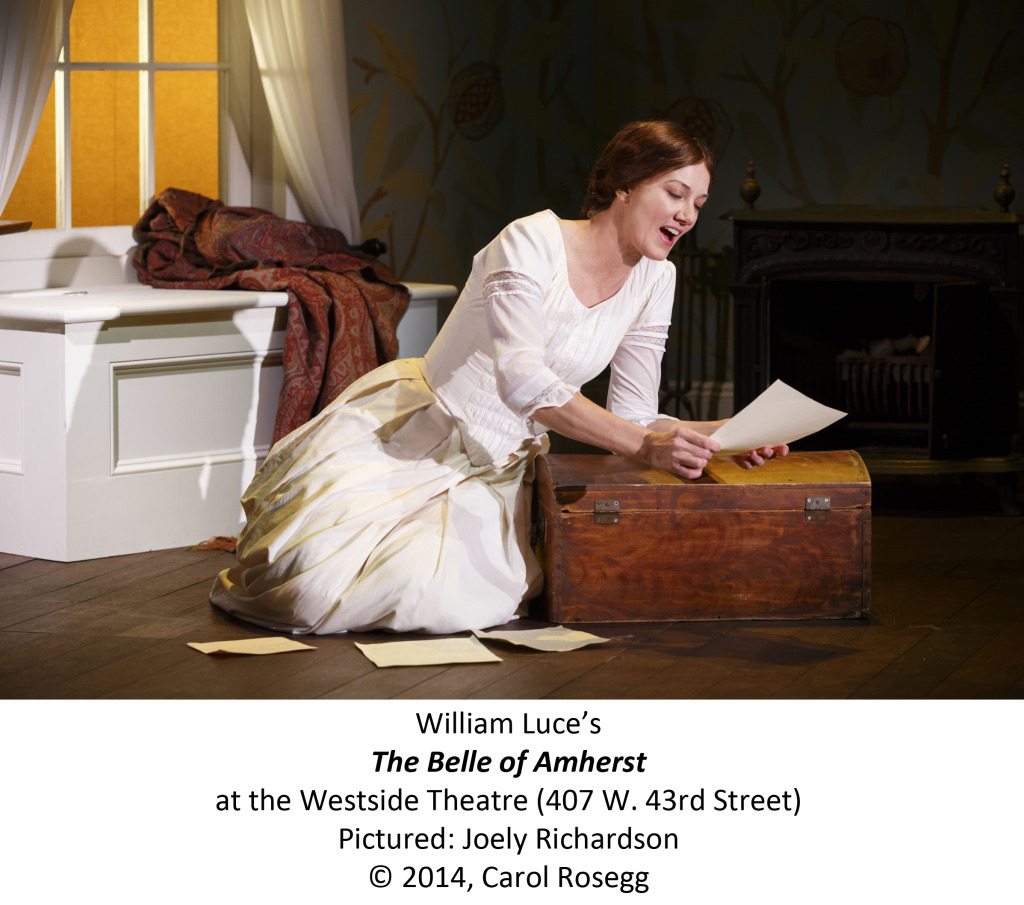 The Belle of Amherst

Thank heavens for great actors who can single-handedly turn a  dangerously droll piece of drama into a  significantly less droll night at the theater. Currently, we have the gifted Joely Richardson to thank for that. Richardson, the youngest daughter of the famed Redgrave family, is assuming the role of America’s most prolific poet, Emily Dickinson in a revival of William Luce’s The Belle of Amherst. Luce initially had written the piece for the late Julie Harris, who earned a fifth Tony award for her 1976 performance.

Going into this show (which I was drawn to solely on the  Richardson factor ), I had little knowledge about Dickinson’s life. According to various reference sources, she was rather reclusive and was considered to be an outcast among her local Massachusetts townsfolk. In Luce’s work, she speaks of her shyness and her failure to connect with boys who are choosing prettier girls. She also speaks of cake. Upon introduction, she provides the entire ingredient list for a black cake she has just baked; it’s sort of like watching the Victorian Food Network minus the razzle dazzle.  The most excitement the play conjures is a visit from Thomas Wentworth Higginson, a contributor to the Atlantic Monthly. Higginson asks for submissions for young writers, and eventually pays a visit to Amherst to visit young Emily.

The profundity of Dickinson is irrefutable, and no rational soul would argue over  the beauty in her work. Richardson, the consummate actor that she is, makes the most of every moment.  “Words are my life”, says Dickinson. “I look at words as if they were entities, sacred beings. There are words to which I lift my hat when I see them sitting on a page…I hesitate which word to take when I write a poem. A poet can choose but a few words and they have to be the chiefest words, the best words.” As a writer and lover of linguistics, it is an inspired moment. However, these moments are all too rare and under Steve Cosson’s static and flat direction, Luce’s words fall short of delicate song.  Audiences keen on finding a mesmerizing character are instead saddled with  the unfortunate burden of soldiering through to the curtain call.

The Belle of Amherst playing through Nov. 23rd at the West Side Theatre, 407 West 43rd street between 9th and 10th ave.  For tickets and information, visit http://belleofamherstplay.com/

Carlos Celdran has some juicy gossip to share, so get comfortable and pay attention.   In the spirit of the smash hit musical Here Lies Love  (currently running downtown at the Public Theater),  Celdran delivers his own tell all tale of  Filipino President Ferdinand Marcos and his First Lady Imelda. It’s no secret how this powerful political duo went to great lengths to keep up appearances and abuse their power, but Celdran delves into the reasons behind their ethically questionable tactics and shares some lesser known tidbits about their reign.

Celdran, who wrote and stars in the show,  speaks from personal experience, having been a tour guide in his native country of the Philippines. Using basic but effective projections Celdran charts the political rise of this controversial couple and interjects with his own commentary. Respectfully and keenly, Celdran does not single out the Marcos administration in his chastisement. ” If you are going to get Ferdinand Marcos and Imelda for everything that they have done”, he observes,  “Then you’ve  gotta get everyone else in the world who knew exactly what President Marcos and Imelda were doing.” It is a sobering thought that could well be contemplated for the actions of our current world leaders.

Celdran is an affable performer and his easygoing manner serves him well as a storyteller. Structurally, the show tends towards erratic sequence and is sometimes repetitive. By the end however, we’re left with an informative and rewarding tale of ego run amok.  But don’t sprint from your seats too soon; Celdran has a very special surprise guest near the finale.