Though I don’t exercise as often as I should (I run about two times a week, on a good week), I never regret it when I do…especially once the workout has ended and I’m done panting, ready to have fun with the fresh wave of endorphins coursing through my system.

One session on the Da Vinci Bodyboard, an exercise tool created at home by a Pilates instructor/chocolatier who started tying straps to furniture all over her house, provided plenty of those endorphins. The board (“bodyboard” is literal) connects to various, elastic straps that you hold onto/strap into while performing what would otherwise feel like standard warm-up exercises combined with yoga poses. 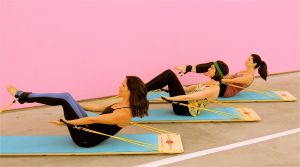 A regular class runs for only 30 minutes, thanks to the workout’s intensity. Floery Mahoney, the instructor and the Bodyboard’s inventor, even admitted that, at home, just 20 minutes will provide a comprehensive workout. “It’s just hard for people to think it’s worth it to come to a class for only 20 minutes,” she explained.

Whether the class had lasted for 20 or 30 minutes, it was undoubtedly worth it. The board works your entire body in a way that’s more meaningful than using any sort of weight machine. That’s because weight machines target a single muscle or muscle group, leaving you with a mixture of strong and limp muscles and joints throughout your body, which could end up hurting you, especially as you age. “It’s really important to train all of your muscles,” Floery explained, citing, for example, weak knee joints that come from running without otherwise strengthening the muscles that surround them.

Before the 30 minutes began, Floery gave us (it happened to be just me and one other woman) the run down. We’d perform each exercise for 30 seconds to a minute, depending on the level of difficulty. Breaks between each heart-pumping task would last for 10 seconds. At the end of it all, we’d stretch for four minutes.

At this point, Floery asked whether we worked out on the regular. The other attendee nodded as if habitual exercise were the most natural thing in the world. I said that I tried my best to run sometimes (leaving out that this mostly applies to when I’m late for work, these days). Thus, Floery assured me that it was okay to take breaks throughout the class whenever I needed to (she suggested three-second breaks to breath during each cycle).

Before I get to the actual exercise part (I know, I promise I’ll get there), it’s imperative that I describe the board. About the length of a yoga mat (we draped one on it for part of the class), the wooden board has various bands attached at different points. Long, thin, red ones span the length of both sides (these, Floery warned, sometimes snap when it comes to the overused boards she shoves in and out of cars all the time—when your board lives at home, she assured, this will not occur) and thicker ones with “handles” attach to either corner on one end. On the other end, similar, thick bands connect to Velcro straps that loop around your ankles in the way that surfers stay attached to their boards.

The workout itself was intense. Imagine doing any kind of core workout that also involves your arms and legs…but all your limbs are strapped to giant rubber bands. The tension helped to engage all my muscles in a way that left them sore for up to three days following my time on the Da Vinci Bodyboard (on day two, walking became a serious chore).

Overall, I found each minute-long exercise very accessible. In other words, anyone can do this, which Floery encouraged. “This works for any ability level,” she insisted. “People don’t understand what their bodies are capable of.” As it turns out, my body was capable of an exercise that was so difficult we only performed it in 15-second segments, broken up by three-second breaks. (This part of the class entailed lying on our backs while “running” with our feet in the air, heads lifted and legs strapped into these massive rubber bands.)

We were lucky to get the class directly from Floery, Da Vinci Bodyboard’s creator, because she obviously knows her stuff better than anyone. In fact, she’s set to travel to South Korea to launch the workout tool there next month. “Right now, we have classes cropping up all over the US and have a lot of master trainers,” said Floery, adding that the product has also come to Switzerland and an upscale hotel in Kuwait.

In spite of the number of “master trainers” (one must get certified through a specialized training to achieve that title), Floery prefers to do the training herself when the Da Vinci Bodyboard arrives in new countries to ensure that people there maintain the integrity of the workout. Also, it’s hard to turn down a trip abroad.

To learn more about the Da Vinci Bodyboard, visit the website, where you can also order one to use at home. There, you can work out on the equipment for as little as 10 minutes a day and still make a huge impact on your body, according to Floery. Based on the way I felt after my workout, I’m quick to believe her.