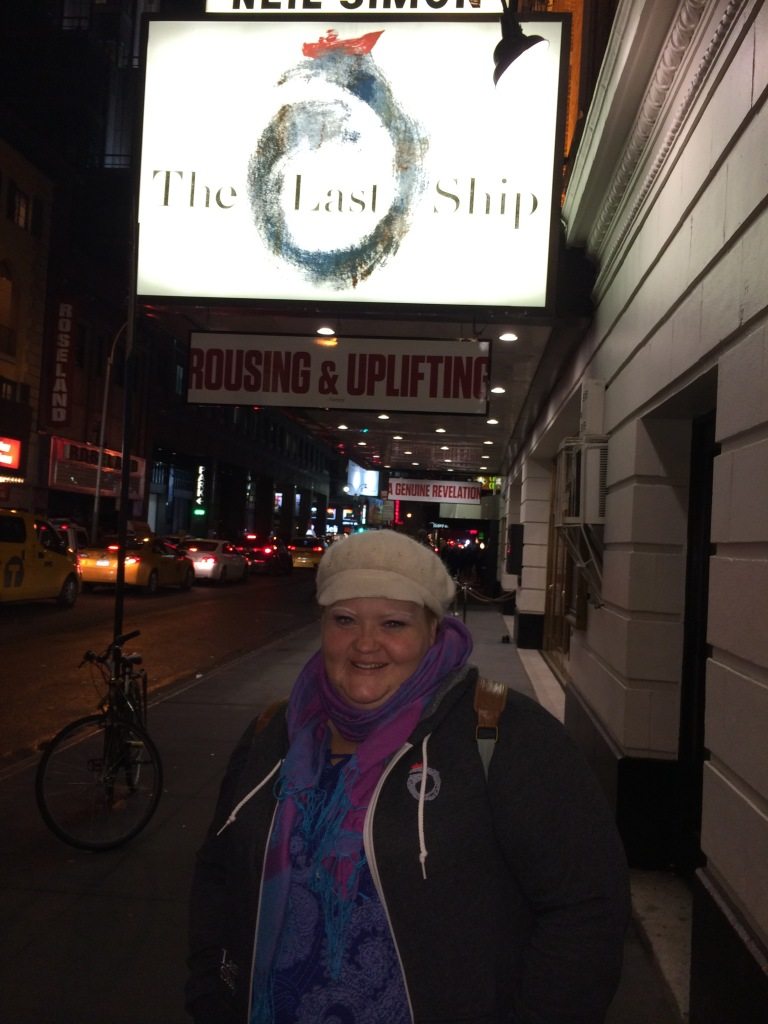 What is it  like to share the spotlight with an International superstar?  Ask Shawna Hamic, who is currently starring in the brand new, musical The Last Ship on Broadway. Written by the former front man of The Police and 16 time Grammy award winner, Sting, it tells the story of Gideon, a  young man returning to his small English town to save the pending closure of the shipyard  and win back his childhood love. Hamic originated the role of Mrs. Dees, a buxom, no-holds-barred  broad who owns the local watering hole. Hamic is making her Broadway debut in the critically acclaimed piece and took a few minutes to chat with Manhattan Digest about riding her ship of dreams to the Great White Way.

As a child in Southern California, Hamic started singing when she was 3.  Her grandfather was a minister and her  mother was the  choir director at their church, so she often sang in the  church services. Her interest  in musical theater was peaked in  junior high school, and she was first cast as Ado Annie in the musical production Oklahioma!  She was cast over upper class men –which was a big deal!

Hamic’s family couldn’t afford a four-year college.  so she went to an intensive 3 year performing arts program at a community college (Citrus College in Glendora, California). Here, she gained exposure  to all genres including  jazz, rock, pop, and traditional Broadway.  She also toured Europe twice and Hawaii for a month with her student peers. The  entire education cost around $3,000 and Hamic  is quick to point out that  “ It’s not about where you go, but what journey you take to get there.”

Hamic had  been on the road for 3 years, playing the brash, swindler Madame Thenardier, in a touring production of Les Miserables. Since the revival was headed to Broadway in March 2014, she auditioned for the same part. In spite of her hope to recreate the role there, the creative team went in a different direction and Hamic wasn’t cast. Instead, she ended up taking a quick trip to Florida to visit family and planned to come back to NYC if there was an audition to attend. Within a few days of arriving in Florida, she received a call from her agent who asked if she could audition the next day for  The Last Ship . Hamic packed her bags, caught an early flight to NYC the next day, and  crashed at a friend’s apartment.

When she received the first call from her agent, she was told  that the casting team wanted her to approximate the Geordie accent when she read sides( Geordie is the region of North East England where the show takes place). She used the concept album (of the same name) which Sting recorded, to mimic the accent. As Hamic is a huge Sting fan, she already owned the recording. Her flight became a rehearsal space while she tried to  master the brogue.

She arrived to the audition, with her song, (Cyndi Lauper’s “I’m Gonna Be Strong.” )  Since she had been on the road for 3 years, she hadn’t sung it. But as crafty actors go…Hamic hatched a plan. At the same audition studio, Hedwig and The Angry Inch was holding open auditions. The rumor mill circulating was that the role of Yitzhak had already been cast so the auditionees were sparse. Hamic seized the opportunity and auditioned simply so she could hear her song be played before she auditioned for  The Last Ship . How freakin’ clever is that?!? With time to spare, Hamic grabbed some lunch and with it, an unwanted dose of food poisoning. Yikes! While most hopefuls step into an audition room wanting to bring down the curtain, Hamic’s simple prayer was, “Oh God, Don’t let me throw up!”. Apart from going sharp at the end of the number,  her initial  audition went well, but furiously fast. Hamic was in and out in 5 minutes.

Within 20 minutes of leaving the room, she received a call back from her agent. The creative team wanted to see her again the next day and had notes for her. “Change the ending of the song, wear something simple and pretty, and go “balls- to –the- wall Madame Thenardier” on the sides.”  “No problem!”, she thought. And one additional note: Sting would be present at the callback.

Hamic arrived early to the Saturday callback  and went to the nearby Westin hotel to compose herself and prepare. Immediately before entering the room and “amping” herself up,  the casting directors announced a bathroom break, but Hamic took it in stride, “Well, at least they ‘ll focus on me instead of concentrating on the fact that they all have to go!”, Hamic thought. Although the audition pianist blind-sighted her by racing through the  song (traditionally done  as a power ballad) she sucked it up, made it work, and plowed through.  It apparently went unnoticed by the casting team, who applauded her deft ability to pull off the song.

Then came the side readings. In a moment, Hamic  took a deep breath and found  instant knowledge of what they were looking for–and she nailed it! As she walked out the door, she heard Sting say, “That was Shawna Hamic, right?”, and she felt overwhelming joy to know that, whatever would transpire, Sting knew her name for two minutes.

That Monday, two days following the callback, dance auditions for the show were being held and Hamic anticipated a callback for the dance portion. Instead, she got a call from her agent (on speaker phone)  who announced that he wanted to be the first person to inform her that she had landed her first Broadway show!  She didn’t even have to attend the dance callback. Later, she  learned  from one of the company managers, that she had been cast in the show about 11 seconds after she had left the callback audition.

The show premiered at Chicago’s Bank of America theatre on June 10th , 2014.  Rehearsals started 6 weeks before that in New York. Since the entire show is a new concept, there was a great deal of trial and error during rehearsals.  The Broadway production is primarily the same as what Chicago audiences saw, but creatives  changed about 20 % of the show. The collaboration of the creators went very smoothly and everyone was on board to make this the best show it could possibly be. “Sting was never precious about “killing his babies”,” she said. “If a song didn’t work, he would simply write a new one.  I tried not to be starstruck when I began working with him because I wanted to view him as a colleague.” At home, though, she admitted  to a bit of “fan-girling”. She has much admiration towards him because of his respect for the process. Through the entire rehearsal period and previews, he was always there supporting and encouraging the cast.

In addition to her role as Mrs. Dees, Hamic serves as the photographer of the show as has provided  photo documentation of the journey, as well as press photos of Sting, which have appeared in Time  magazine and other established publications.

Like a tight-knit family, the cast and crew have a Saturday night ritual with their theatre friends at the August Wilson theatre, located directly across the street from the Neil Simon on West 52nd street. Jersey Boys is currently running here. Each Saturday night,  the cast from both shows serenade  each other following the show. Usually there is a short rehearsal for it. Upon learning of the ritual, Sting wanted to get involved. “He really just wants to play and he’s  up for anything!”, Hamic said, “Including an appearance on “Carols for a Cure”, a holiday album with songs from current Broadway  casts, which raises money for Broadway Cares/Equity Fights AIDS. “Soul Cake”, a rambling version of the traditional folk song, is The Last Ship‘s contribution  ”

Hamic has a short wish list of roles she’d like to tackle, including Mrs. Lovett in Sweeney Todd. For now, though, she is exceedingly grateful and thrilled to be performing as a feisty bar owner and performing  the Act 2  opening number,  written expressly for her by Sting (“Mrs. Dees’ Rant). The composer has also become her fellow cast member, as he is currently starring as Jackie White, the foreman of the shipyard through January 24, 2015.

The Last Ship is currently running on Broadway at the Neil Simon Theatre (West 50th between Broadway and 8th Ave.) For tickets and more information, visit http://www.broadway.com/shows/last-ship/  or visit the box office.

The original cast recording of The Last Ship will be released on Tuesday Dec. 16th. “Carols for a Cure 2014” can be  purchased now. Both are available on iTunes or www.amazon.com