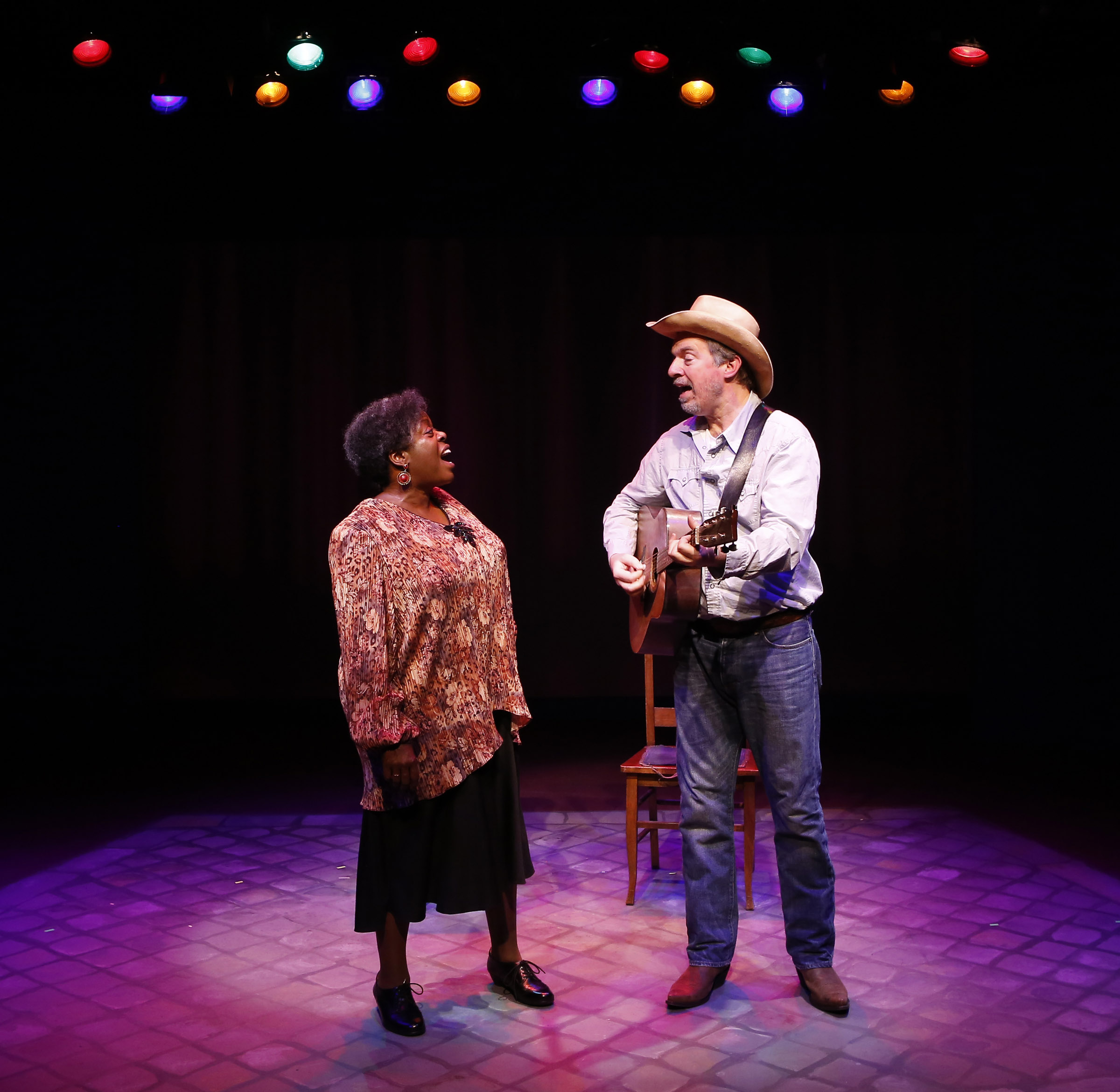 In her auto-biography Don’t Fall Off the Mountain , actress Shirley MacLaine writes, “the more I travelled the more I realized that fear makes strangers of people who should be friends.” In the case of Osceola Mays (Lillias White) and John Burrus (Scott Wakefield)- two travelers to unfamiliar territory, fear actually becomes the impetus which unites them.

Mays and Burrus are the subjects of the wonderfully warm two person musical play Texas in Paris, which recently made its world premiere at the York theater Company. Based on actual documentary footage and audio recordings collected by Alan Govenar (who wrote the show), it tells the true story of two unlikely strangers who forged a tolerance and understanding of one another by sharing a concert stage in 1979 Paris.  The pair hail from Texas,  each have a devout appreciation of the Christian faith, and both are gifted with the natural ability to  sing. It seems then that they would develop an immediate rapport.

The challenge they face stems from their backgrounds. Mays, who grew up in a small town, is raised with a  fear towards white folks. Burrus, also from a small  town, believes that people should “stick with their own kind.”   The two untrained singers soon  find themselves in front of a Parisian audience, sharing musical numbers and short, personal stories. Audiences are enamored by the charismatic and uninhibited Mays who raises the rafters with a cappella gospel goodness (only Tony Award winning White could embody such a powerhouse-and she does it with seemingly effortless sass and style.) Mays finds Paris to be a welcomed utopia and a break from her hum-drum Texas existence.

Burrus  on the other hand, feels out of touch with his audience, uncomfortable with the prestige of Paris, and even more uneasy with his stage co-star.  Although his show’s character is meant to take a back-seat to Mays, the talented musician and singer Scott Wakefield creates some wonderful moments in the 80 minute show, especially during a “come to Jesus” segment in his hotel  when he heartfully sings, “Where He Leads Me.”

Through off-stage conversations, the pair find themselves respectfully confronting each other’s insecurities, prejudices, misunderstandings, and their true interpretations of faith. While the script occasionally drifts into preachy “why can’t we just get along” territory,  Govenar’s script is mostly genuine, sincere, and reflective of how we connect -or in some cases- disconnect with one another in our current, daily interactions.

Texas in Paris runs through March 1st at The York Theatre Company (619 Lexington Avenue between 53rd and 54th streets.) For tickets and information, please visit http://www.yorktheatre.org